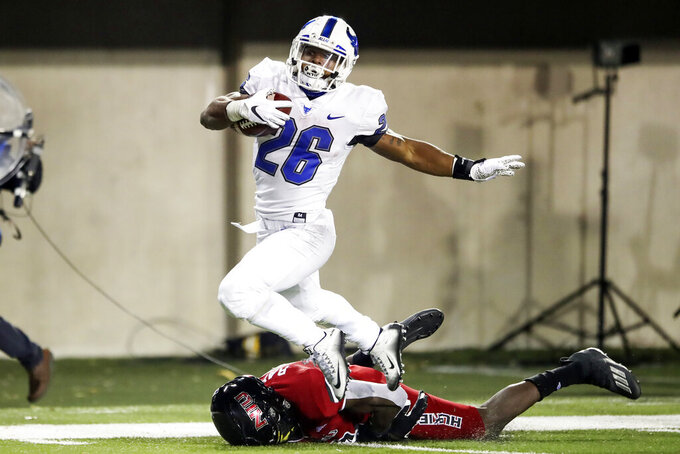 FILE - In this Nov. 4, 2020, file photo, Buffalo running back Jaret Patterson (26) runs past Northern Illinois linebacker Daveren Rayner (9) during the first half of an NCAA football game, in DeKalb, Ill. There was a time no one was interested in recruiting Jaret Patterson, the under-sized running back, who finally accepted an offer to play at Buffalo. Some four years later, Patterson is the talk of the nation after generating 409 yards rushing and scoring eight touchdowns in a 70-41 win over Kent State last weekend. (AP Photo/Kamil Krzaczynski, File)

BUFFALO, N.Y. (AP) — Jaret Patterson was nearly inconsolable upon learning how difficult it was going to be landing a football scholarship despite a decorated high school career.

Turned down outright during a visit to Eastern Michigan, the undersized running back left his traveling party to hole up in one of the school’s bathrooms where he broke down and cried.

“We had like four people walking around Eastern Michigan’s football house looking for him, and James found him,” Justin Winters recalled, referring to Patterson’s twin brother, who was offered a scholarship.

“Literal tears. He didn’t understand why he was the one who was getting slept on,” said Winters, who was an assistant coach at Maryland’s St. Vincent Pallotti, where the Pattersons played. “So we went in there and we talked. I told him to wipe his tears, `Don’t let nobody see you cry.‘”

The memory from 2017 is a distant one now for Winters, who was a walk-on linebacker at the University at Buffalo and eventually played a key role in persuading his alma mater to take a chance on both Pattersons.

“He came here, fifth string or first string, and said, `I can’t wait until I put the pads on and I’m going to show them,‘” Winters said. “I said, `All right.’ And look what he did.”

Four games into his junior season, the 5-foot-9, 195-pound Patterson has essentially re-written the Mid-American Conference program’s record book, while coming off his most impressive national attention-grabbing moment so far.

In a 70-41 win over Kent State on Saturday, Patterson finished with 409 yards rushing, the second most in FBS history and 18 shy of Samaje Perine’s single-game record for Oklahoma in 2014. And he scored eight touchdowns rushing, matching the FBS record set by Illinois running back Howard Griffith in 1990. Arizona State's Kalen Ballage, in 2016, is the only other player to score eight touchdowns (seven rushing and one receiving) in a major college game.

Overall, Patterson’s 920 yards rushing this season rank fifth in the nation, with the four players ahead of him having played nine or more games.

Reminded about his emotional breakdown at Eastern Michigan, Patterson acknowledged he wouldn’t have envisioned this kind of production during one of the lowest moments of his life. But the memory of being overlooked is what drives him.

“It made me work even harder,” Patterson said. ”(Winters) always used to tell me, you only need one school to love you. And I knew whatever school me and my brother had the same offer, we were going to give them everything.”

The twins were a package deal, with most schools favoring James over Jaret. Buffalo already had a commitment from running back Kevin Marks, but made room for Jaret Patterson by having him join the program the following January.

James Patterson, a linebacker, has been a three-year starter and defensive captain, and leads Buffalo with 37 tackles.

It’s Jaret who has become difficult to ignore.

His performance drew various player of the week honors along with social media praise from Pro Football Hall of Fame running back Barry Sanders and NBA star LeBron James.

Patterson is pleased but focused. He’d rather credit his offensive line for opening holes, or look ahead to facing Ohio (2-1) on Saturday. Buffalo (4-0) is a win from clinching a berth in the MAC championship game.

Having watched the game tape from Saturday, Patterson also thinks he could’ve been more productive.

“You always think it was a perfect game, but it really wasn’t. I missed a few runs,” he said. “It’s never being satisfied with your performance. That’s how I can top it.”

Coach Lance Leipold has run out of adjectives to describe Patterson.

“His play has been spectacular,” Leipold said. “But it’s the things we see in the consistency each and every day that he brings to our program that really is what we admire the most.”

Leipold is referring to Patterson making up for his lack of size with a relentless work ethic, which was evident once again in practice Monday. Leipold pulled Patterson off the field after watching the player working with the kickoff coverage unit even though that’s not one of his responsibilities.

"It’s just that burning desire, that competitive nature that he has which makes him special,” Leipold said.

During Patterson’s first high school season, Winters had him start doing 100 pushups, 100 sit-ups and 100 squats every day, before increasing the workload by 100 each every two weeks.

“He ended at like 800 a night his freshman year,” Winters said.

Winters recalled Patterson's senior day, a 55-48 overtime win over Riverside Baptist. Patterson finished with 282 yards rushing, 54 receiving, returned two kickoffs for 124 yards, including a touchdown, returned an interception 98 yards for another score and ended the game by forcing and recovering a fumble.

“I was calling coaches every day, coaches coming into our building and offering everybody but him, and I was literally telling them, `You all are going to regret it,’” Winters said, who now grows emotional because of everything Patterson has accomplished.

“I’ve cried a few times watching all the goals he’s reaching,” he said. “I’m just happy. I've seen the low end. I knew how it hurt him. Every run, that’s what he runs for. He runs with that pain.”