Building the Eagles at Eastern Michigan 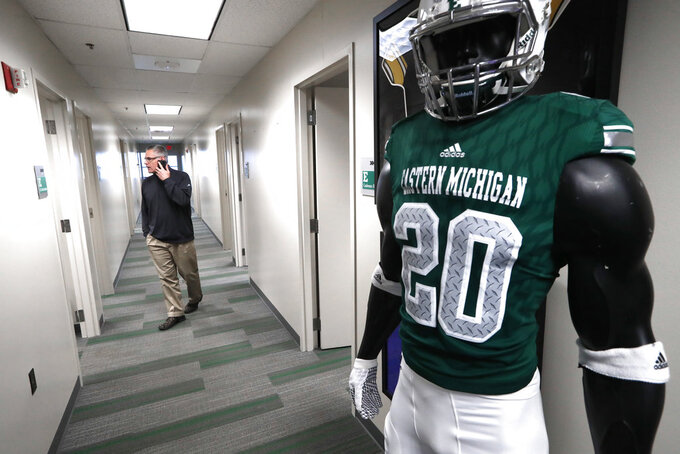 Eastern Michigan football coach Chris Creighton talks with an assistant in preparation for the Camellia Bowl, in Ypsilanti, Mich., Monday, Dec. 10, 2018. The Eagles will face Georgia Southern in the Camellia Bowl on Saturday, earning a spot in NCAA football postseason play for the second time in three years and just the third time in school history. (AP Photo/Paul Sancya)

YPSILANTI, Mich. (AP) — Eastern Michigan's football team has stepped out of the shadows cast by the neighboring University of Michigan and four professional teams just down the road in the Motor City.

The Eagles (7-5) will face Georgia Southern (9-3) in the Camellia Bowl on Saturday, earning a spot in postseason play for the second time in three years and just the third time since the school started playing major college football in the mid-1970s.

"Five years ago, there were very few people on this Earth that believed that was possible," coach Chris Creighton said in his office earlier this week. "Now, we have some evidence that it is indeed possible."

Creighton, his staff and players have taken the program to unprecedented heights. He granted The Associated Press behind-the-scenes access to get a glimpse at some of the work.

"Here goes nothing," Creighton says softly as he walks into a conference room, embellished with "Champions Built Here" across the top of the wall to his left. It's 8 a.m. Monday and time for a staff meeting. There is a lot to do with a trip to Alabama coming up at the end of the week.

Creighton sits at the near end of an oval table with nine assistant coaches, who are surrounded by a dozen more people on the support staff. The devoutly religious coach bows his head as does everyone else in the quiet room.

"Pray for a special week and an awesome time with our guys," Creighton says. "Pray our guys have an absolute blast and that we play our best football of the year."

Preparing for practice later in the day is not a simple task. Two assistants differ on the length of practice.

"More is better for me," defensive coordinator Neal Neathery says.

The coach sitting one spot to his left lobbies for less in part because the players also are in finals week.

"I worry about wearing them down," offensive coordinator Aaron Keen says.

The topic of recruiting takes up most of the 52-minute meeting, which includes mentions of schools such as Massachusetts, Western Kentucky and New Mexico trying to sign some of the same players. The coaches discuss how well they got to know some prospects the previous weekend. Turns out some of the kids were more challenging to engage in conversation.

"Are we recruiting football players or guys who can talk?" cornerbacks coach Fred Reed bristles.

As soon as the meeting ends, Reed pops out of his chair and is the first to exit the room. Creighton follows Reed down the hallway and goes into his office.

"I told him we want both good football players and good guys who can talk so we can get to know them," Creighton explains.

Creighton knows what he's selling to the recruits, now in his fifth year at Eastern. He is a familiar face in Ypsilanti, a working-class town with 20,000 residents easy to drive by on I-94 if the destination is, say, Ann Arbor. The mighty Wolverines play in the Big House, just six miles from the Eagles' Rynearson Stadium.

Eastern Michigan has had some great players over the years, some of whom are in the NFL such as Detroit Lions guard T.J. Lang, but it hasn't had many good or even mediocre teams. Two years ago, HBO made the school a subject of a critical report about how much it spends on athletics.

Eastern Michigan hired Creighton in 2014 after he led Drake University, Wabash College and Ottawa University in Kansas. He didn't have a losing record until his debut season with the Eagles in 2014 when they were 2-10 and the next season, they took a step back and won only one game.

Eastern Michigan won seven games two years ago — the most in a quarter-century — and earned a trip to the Bahamas Bowl. This year, the Eagles won enough to make postseason plans again.

Eastern Michigan created a buzz on social media when it posted a video of Creighton asking for his team to be selected for a bowl and setting up his players to lip sync the Grammy-winning song "Say My Name" by Destiny's Child. Even with seven wins, a Mid-American Conference team can get left home during the postseason.

The Eagles got what they wanted Dec. 2, but they also got less than three weeks to prepare for the trip to Montgomery, Alabama, to play a team for the first time.

Shortly after 10:30 a.m. Monday, Creighton meets in his office overlooking the football stadium with director of football operations Dylan Saccone and associate athletic director Greg Steiner to discuss day-by-day details of the five-day-trip. The creative coach, who has his players knock down a concrete wall with sledgehammers before each home game, shares his latest idea.

Ten players on the team are graduating this month, but they will miss commencement ceremonies Saturday because they will be about 700 miles away from Ypsilanti, Michigan, during the bowl game.

Creighton came up with a way to honor the graduates Friday night.

"Each guy gets their name called, they go up and get the fake diploma and the pep-rally crowd goes bananas," he says. "That'll be fun."

Saccone and Steiner sign off and make arrangements for it to happen. Creighton orders a Turkey Tom with cheese from Jimmy John's, starting the submarine sandwich at his desk and finishing it in a meeting with his offensive staff.

"We can't compete with Power Five money," Creighton laments. It is just after noon.

Creighton's list of things to do, which he writes every day on notepads, includes finding a coach for the offensive line. He has some candidates in mind, as do his assistants, including tight end coach Rob Reeves, who had a growing list of names on a piece of paper.

"People are hitting up everybody on the staff to try to get in here," Creighton says.

Despite doing what has never been done at Eastern Michigan, no one seems to be trying to pry the 49-year-old Creighton away to a bigger program, not this year anyway. He is grateful to be employed after peers at Central Michigan, Akron and Bowling Green lost their jobs this year.

Creighton leads a spirited practice, having players jump around him enthusiastically to simulate how excited they would be on the sideline for their teammates. To help simulate what Georgia Southern does on offense and defense, the scout teams have small tablets attached to belts so they can see where they are supposed to go on each snap.

Brett Petersmark, who played for Eastern Michigan in the mid-1980s, was one of the few visitors at practice.

"I think we're just scratching the surface because coach Creighton is real," Petersmark says. "He doesn't play games. He doesn't have an ego. He wants quality men, who want to earn a degree and play football.

"I had lunch when he got here and I said, 'It's going to take time because it's probably tougher than you think it is to win here because Eastern Michigan has a lot of baggage.' We've gone through a bunch of football coaches, but we got a great one now."

Creighton gets fired up soon after walking off the practice field in a dome, which the team has to vacate by 6 p.m. because it is rented by a youth soccer program. He briskly goes past a 60,000-square foot structure that is a major upgrade to the athletic department's facilities and into the visitors' locker room. He and the players get in and out of uniform under the stadium's bleachers because their previous locker room was demolished for the new facility.

Creighton picks up his cellphone after changing and pumps his right fist.

Creighton has a current player and a potential recruit waiting for him in the football program's office lobby. It has been 12 hours after he arrived for work and there is more to do. The early signing period, after all, opens next Wednesday just four days after the bowl game.

"I look at my watch all the time," Creighton says. "I want time to slow down because I need more time to get to the next thing."