Burr-Kirven an unassuming leader for No. 16 Washington 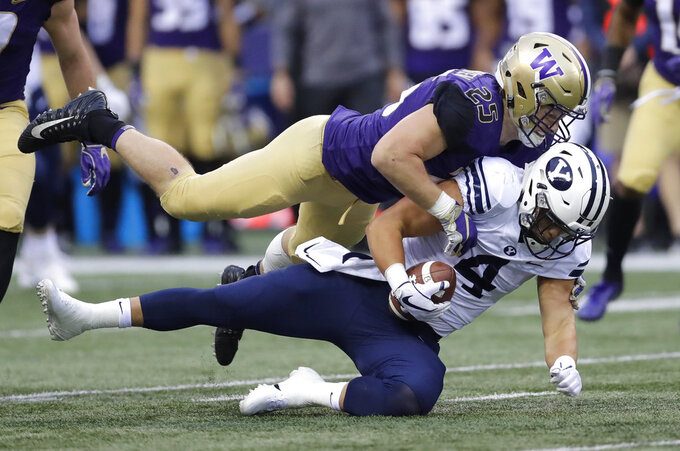 FILE - In this Sept. 29, 2018, file photo, Washington linebacker Ben Burr-Kirven (25) tackles Brigham Young running back Lopini Katoa (4) during the first half of an NCAA college football game, in Seattle. Burr-Kirven is No. 2 in the country in tackles heading into Friday’s Apple Cup against No. 7 Washington State. (AP Photo/Ted S. Warren, File)

SEATTLE (AP) — Of all the impact players on the standout defense for No. 16 Washington, Ben Burr-Kirven might be the most unassuming.

He doesn't seek attention. Doesn't celebrate every play he makes. All he does is make tackles, and make them at a rate rarely seen at Washington in the past three decades.

"College football, there's a ton of snaps, offenses go fast, so you end up playing 65, 70 snaps a game on defense and a lot of teams like to run the ball so if you're playing linebacker you're going to get a lot of tackles," Burr-Kirven said.

Burr-Kirven will be incredibly important Friday against No. 7 Washington State in the Apple Cup with a berth in the Pac-12 title game on the line. With the way the Cougars use running backs James Williams and Max Borghi out of the backfield, and the amount of underneath routes in the passing game, Burr-Kirven is likely to be busy trying to make tackles in space.

That means adding to his total of 145 tackles through 11 games. That's second-most in the country, and he's likely to take over the top spot with UMass linebacker Bryton Barr, who has 147, already completing his season.

"Over the two running backs, they've caught over 100 passes," Washington coach Chris Petersen said. "And he (Washington State quarterback Gardner Minshew) gets it out there and it's all about space, creating space. That's what he does, creates space. Space in the flat? That's where the ball's going. Now try and tackle these shifty guys that are hard to tackle. Space downfield? He'll find it. You rush three guys? He'll find the space and throw it in there. It's always a cat and mouse game."

Barring something unexpected, Burr-Kirven is going to have more tackles than any other Washington player since 1989. Mason Foster had 163 in 2010, but he's the only one to come close to James Clifford's total of 168 in 1989. Clifford's total came toward the end of an era where multiple players could be awarded a tackle on one play. Rules were changed to where a maximum of two players can be awarded a tackle on one play, and players getting to 100 tackles in a season became an accomplishment.

Which makes what Burr-Kirven is on pace to accomplish even more remarkable. If he stays with his average through 11 games, Burr-Kirven could finish the season in the neighborhood of 170 tackles.

"It's just the nature of football. I mean in high school I made a lot of tackles," Burr-Kirven said. "Just how it works out sometimes. It's fun to tackle people. I like tackling, but it's nothing like I'm freaking out about it. I'm just going and playing my game."

It's also a remarkable total considering he plays on a defense filled with several future NFL draft picks. Burr-Kirven has more tackles than the next two players on Washington's defense combined. His current total is 61 more than he recorded last year as a junior, when he led Washington in the category.

Frank Ginda of San Jose State led the country in tackles a year ago with 173, but he is the only player to reach at least 170 since Luke Kuechly had 191 tackles in 2011 to lead the country. If the Huskies beat Washington State, they would get an extra game in playing for the conference title for Burr-Kirven to add to his total. And while he'd be unlikely to reach Kuechly's number, it's not completely out of the question.

"The way he runs around the field, he literally makes like every play," Washington defensive tackle Greg Gaines said. "He's right there. I don't know how he does it. He's so fast. He has great vision. He's an incredible player."