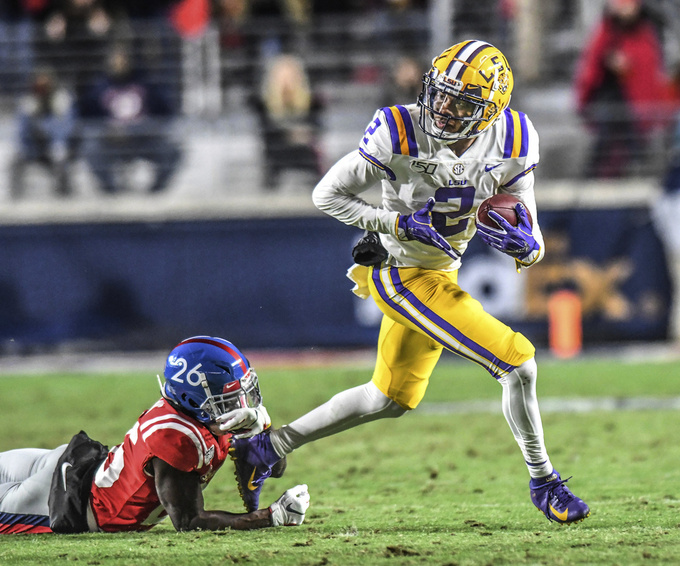 OXFORD, Miss. (AP) — Joe Burrow’s postgame shrug pretty much summed up what kind of a season it has been for LSU.

“You know things have changed at LSU when you have 700 yards of total offense and everybody is upset in the locker room,” the Heisman Trophy front-runner said.

Burrow threw for a career-best 489 yards and five touchdowns as top-ranked Tigers built a big lead and held off Mississippi 58-37 on Saturday night.

Burrow completed 17 consecutive passes at one point to set a school record and passed Rohan Davey’s single-season school record for yards passing set in 2001. He threw two interceptions in the second half as Ole Miss climbed closer, but put the game away with a 61-yard touchdown pass to Chase with 5:11 remaining.

Chase tied the school record with his 12th touchdown catch of the season.

“I thought he (Burrow) was on fire, especially in the first half,” Orgeron said. “He made a lot of plays and extended some plays with his feet. He's a great athlete.”

Clyde Edwards-Helaire capped the scoring with a 49-yard touchdown run with 3:08 left and finished with 174 yards rushing on 23 carries.

“We dug ourselves too deep a hole,” Ole Miss coach Matt Luke said. “We had a chance to get it to a one possession game, but we never could get there.”

Ole Miss freshman quarterback John Rhys Plumlee had 212 yards rushing yards, a school record for a quarterbacks, and three touchdowns and was 9 of 16 passing for 123 yards.

“We couldn't stop him but we won the football game,” Orgeron said. “(Burrow) broke a record and so did Ja'Marr. We're going to get better. I have to remind them (team) to enjoy the win.”

LSU: The Tigers set the tone with the early touchdown barrage and eliminated the thought of a road upset.

Ole Miss: The Rebels got big runs from Plumlee and Jerrion Ealy (13 carries for 141 yards), but were 2 of 11 on third down conversions and 1 of 4 on fourth down conversions. The Rebels pulled within 11 points midway through the third quarter, but never got any closer.

LSU's impressive first half performance should be enough to remain No. 1 in next week's poll.

LSU: Hosts Arkansas in the first of a season-ending, two-game home stand on Saturday. The Tigers can clinch the SEC West with a victory.