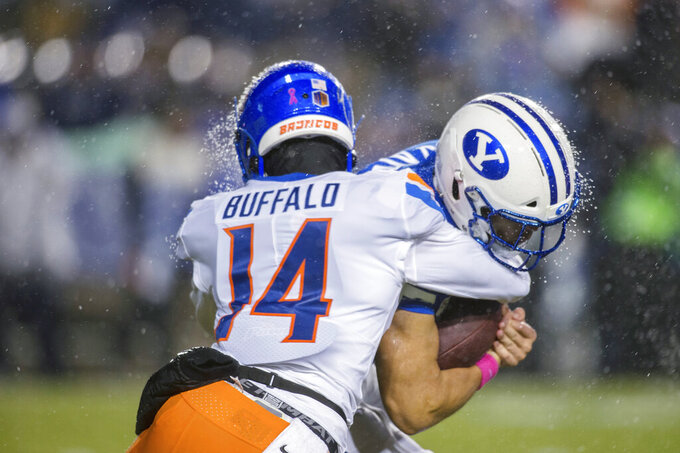 Romney threw for 221 yards and two touchdowns to help BYU upset No. 14 Boise State 28-25 on Saturday night. The Cougars snapped a three-game losing streak with their first victory over the Broncos since 2015.

BYU turned to Romney, its third-string quarterback, with Zach Wilson and Jaren Hall both sidelined with injuries. He threw two scoring passes to Matt Bushman and helped deliver a second home win for the Cougars (3-4) over a Top 25 opponent this season.

"We needed a game like this to get that stone rolling again," Bushman said.

The Cougars' hopes for a bowl game were looking dim after blowing fourth-quarter leads in back-to-back games against Toledo and South Florida. This time around, BYU used a big third quarter to build a large enough cushion to hold on.

The Broncos trimmed an 18-point deficit to three late in the fourth quarter. Chase Cord hit Octavius Evans with a 13-yard TD pass and then Akilian Butler with a 5-yard TD pass to make it 28-25 with 3:17 remaining.

"There wasn't one point where we thought we were going to lose," Boise State lineman John Molchon said. "That's the one thing about us. No one had their head down. No one felt very comfortable in the situation. We all really truly believed that we were going to come out on top."

The Cougars were able to run out the clock after Austin Kafentzis picked up a yard on 4th-and-inches from the BYU 34 with 2:17 left.

Boise State (6-1) was dealt a serious blow to its New Year's Six bowl hopes after just its third loss in the series with the Cougars.

BYU took its first lead at 14-10 early in the third quarter when Sione Finau took an option pitch and raced 46 yards untouched for the score. Then the Cougars dug into the bag of tricks to pull away.

Romney hit Bushman with a pair of touchdown passes to extend BYU's lead to 28-10 late in the quarter. On the first one, he faked a QB sneak on 4th down, popped out, and hit Bushman down the middle for 27 yards. Then, following an interception by Jackson Kaufusi, Romney hit a wide-open Bushman down the sideline after a reverse flea flicker for a 39-yard score.

The Cougars racked up 196 yards on just 11 plays in the third quarter.

"Our game plan coming into this game was to be aggressive," Romney said. "We tried in the first half and it didn't really work. In the third quarter, when we had them where we wanted them, that's when it paid off being aggressive."

Cord, Boise State's No. 2 quarterback, got the call with Hank Bachmeier out because of an injury. Cord struggled in his first career start, throwing for 185 yards, two touchdowns, and a pair of interceptions.

"He had a good rhythm early on, but BYU, they have a really good defense, we know that," Broncos coach Bryan Harsin said. "They made it difficult in some of the windows."

Neither team could get much done on offense before halftime. Boise State and BYU each scored on their opening drive, then combined for six straight three-and-outs during the second quarter. The Broncos finally broke that lengthy string of punts on their final drive before halftime, scoring on a 38-yard field goal from Eric Sachse to take a 10-7 lead into the locker room.

BYU went to the bag of tricks against a Boise State program that has a history of success with trick plays.

The Cougars scored their final two touchdowns off a fake QB sneak and a flea flicker pass. Then BYU converted a late fourth down with Kafentzis, nose tackle Khyiris Tonga, and defensive back Dayan Ghanwoloku lining up in the backfield in a rugby-like scrum formation.

"It was just on us," Boise State defensive tackle David Moa said. "We didn't play with our fundamental techniques in those plays and BYU capitalized."

The Cougars have beaten two Top 25 teams at home in the same season for the first time. BYU last beat two ranked teams in 2009, notching wins over No. 3 Oklahoma, No. 16 Oregon State and No. 22 Utah.

Boise State: With Bachmeier out, the Broncos did not possess their usual explosiveness on offense. Cord threw a pair of costly interceptions and Boise State could not get enough done in the running game when it mattered against one of the nation's worst run defenses.

BYU: Down to their third-string quarterback, the Cougars struggled for a time to move the ball after a promising start. They generated three total yards on 13 plays in the second quarter before coming alive with three consecutive scoring drives in the third.

Boise State will likely take a steep tumble in the polls after its first loss.

BYU visits Utah State in the Battle for the Old Wagon Wheel on Saturday.