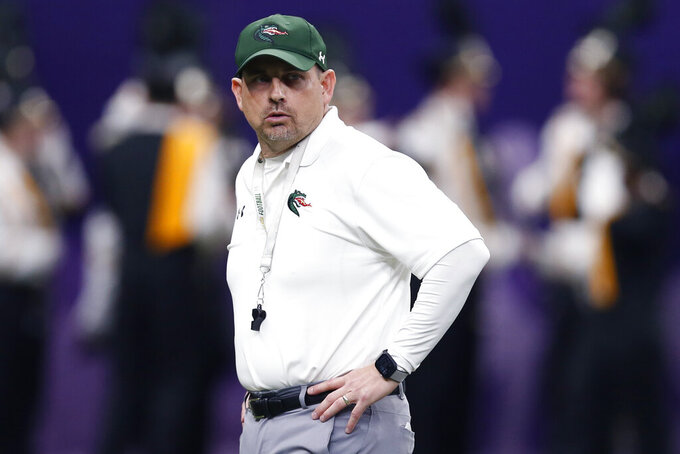 FILE - UAB coach Bill Clark walks on the field before the team's New Orleans Bowl NCAA college football game against Appalachian State in New Orleans, Saturday, Dec. 21, 2019. Conference USA has schools stretching over 10 states, from Texas eastward and then toward the north. The 14-team league is within the footprint of the SEC, Big 12 and ACC. Like those Power Five leagues that play in the same region, C-USA is planning to play football this fall. (AP Photo/Brett Duke, File)

Conference USA has schools stretching over 10 states, from Texas eastward and then toward the north. The 14-team league is within the footprint of the SEC, Big 12 and ACC.

Like those Power Five leagues that play in the same region, C-USA is planning to be on the field this fall.

Still, things got shaken up even after C-USA decided to keep its original eight-game league schedule intact, and allow schools to play up to four non-conference games as normal.

Old Dominion decided last month to not play fall sports amid COVID-19, costing a conference game for every C-USA team in the East Division and two in the West. There were also many games lost with the remaining Power Five conferences (Big Ten, Pac-12) and two Group of Five leagues (MAC, Mountain West) opting to shelve football this fall.

C-USA favorite UAB's season-opening home game Thursday night will be played only about two weeks after being scheduled. Central Arkansas, an FCS team playing a non-conference schedule even after the Southland Conference postponed all its league games this fall, won the first college game played in this pandemic-altered season over the weekend.

“With everything going on, you never really know if it could be your last game, or if you could miss a few games, especially with COVID-19 and everything else going on in the world,” UAB senior left tackle Colby Ragland said. “It is easy to lose focus of being on the football team and the goal of going out there and winning a championship. Our coaches do a great job of letting us know what they know about what is going on.”

The Blazers were supposed to open against New Mexico State, which postponed it season. The Blazers secured the UCA matchup with stipulations of paying for the hotel and pregame virus testing for the visitors.

"It was what it took to get the deal done,” UAB coach Bill Clark said. “We said we were going to do what it takes to get a game.”

Rice is playing only its eight conference games, and won't open until Oct. 3. FIU also has only an eight-game schedule set, without ODU but with a non-conference game at Liberty. Only Southern Miss, UTSA and UTEP have filled out full 12-game schedules.

East Division: WKU lost to UCA in coach Tyson Helton's debut last season, but went 9-3 the rest of the way. The Hilltoppers finished with a four-game winning streak that included a 45-19 win at SEC team Arkansas and the First Responder Bowl over Western Michigan. FAU has won two of the last three C-USA titles, and Marshall was the only team last year to beat the Owls in league play. But neither FAU or Marshall have returning starting quarterbacks as expected.

West Division: Two-time defending division champ UAB has won 28 games overall since 2017, the most among C-USA teams since the program's return from a two-year hiatus. Clark has nine returning starters on offense, and nine more on defense.

— Marshall junior running back Brenden Knox was the C-USA offensive player of the year last season when he ran for 1,387 yards and 11 touchdowns. He has 10 100-yard rushing games in his two seasons with the Thundering Herd.

— WKU senior linebacker DeAngelo Malone is the reigning C-USA defensive player of the year. He had 99 tackles, 11 1/2 sacks and 21 tackles for loss last season.

— Third-year Southern Miss starting quarterback Jack Abraham threw for 3,496 yards and 19 touchdowns last season, including two 400-yard games, though he needs to cut down on interceptions (15).

With all the changes by other leagues, including limitations on non-conference games, C-USA has only five games against Power Five opponents (UAB at Miami, Louisiana Tech at Baylor, UTEP at Texas, WKU at Louisville, and Charlotte at North Carolina). That is down from 20 last year, when six C-USA teams had multiple power league opponents.

By John Zenor 28 minutes ago
By Pete Iacobelli 2 hrs ago
3 hrs ago
By Ralph D. Russo 6 hrs ago
By Ken Powtak 20 hrs ago