C-USA's state of transition: 6 of 11 schools in final year 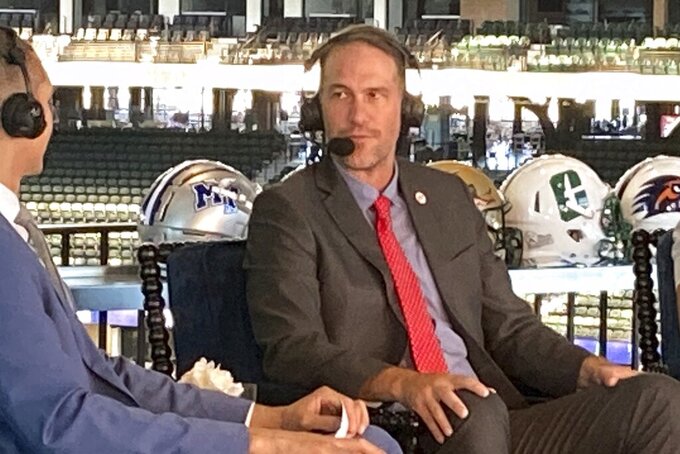 ARLINGTON, Texas (AP) — Western Kentucky football coach Tyson Helton was part of Conference USA's inaugural season in 1996, as a freshman quarterback on his father's team at Houston that shared the first title. He was also previously an assistant coach for two other teams in the league that is now in a state of transition.

The Hilltoppers have twice won nine games and been to bowl games in each of Helton's three seasons. They were league runner-ups last season, and are among the only five of C-USA's current 11 schools that will still be part of the league a year from now.

“I’ve seen this conference recreate itself many times over, and every time it’s become stronger,” Helton said Wednesday at the league's media day. “It’s always been an exciting conference to play in. ... I’m focused on 2022. We’ve got some great Conference USA teams that are still in the conference, so it ought to be really, really competitive.”

Defending champion and preseason favorite UTSA is leaving for the American Athletic Conference next summer, along with Florida Atlantic, North Texas, Rice, UAB and Charlotte.

UTSA quarterback Frank Harris, the league's preseason offensive player of the year, said the Roadrunners have to prepare the same way they did last season, and have the same chip on their shoulder they did when winning as school-record 12 games and becoming a Top 25 team for the first time. He said being their last C-USA season doesn't change anything.

“We've just got to go out there and compete,” said Harris, who threw for 3,177 yards and 27 touchdowns last season, and ran for another 566 yards and six scores. “Game by game, go out and execute and do what we’ve been doing, and try to have another great season.”

There were 14 C-USA schools before Marshall, Old Dominion and Southern Mississippi left this summer for the Sun Belt. Southern Miss, the last of C-USA's original six teams to depart, shared that 1996 title with Houston, which left the league after the 2012 season for the American.

Commissioner Judy MacLeod said it was hard to predict where things would settle and, without being specific, that there were “multiple people” that would like to join C-USA. For now, she said the league was thrilled with the group of schools in place for the 2022-23 academic year.

“The schools that will be moving on, Conference USA has been great to those schools, and those great schools have been great for us,” MacLeod said. “So we expect a tremendous year across the board and I’m really excited for our future following.”

“My personal opinion is I don’t think it’s done yet. I think there’ll be more teams coming,” said Middle Tennessee State coach Rick Stockstill, the league’s most-tenured coach going into his 17th season. “I think if you look at it geographically throughout the country, I think there’s going to be a lot of movement still within the conferences. But I think we’re in a great position.”

The first C-USA job for Helton was as a Memphis assistant from 2004-06 when the Tigers were still in the league, before going to UAB and then Cincinnati after the Bearcats had already departed. Cincinnati, Houston and UCF — former C-USA teams now in the American — jump up to a Power Five league when they go to the Big 12 next year.

Helton anticipates C-USA will “keep growing and evolving, and you’re going to look back in a couple of years and say, ‘Man, that they did a great job of reestablishing themselves again’.”

The league's two first-year coaches are Mike MacIntyre at FIU and Sonny Cumbie at Louisiana Tech — both schools that will remain. Bryant Vincent is the interim coach at UAB after the offensive coordinator was promoted in late June when Bill Clark retired to address chronic back issues.

After finishing last season as interim head coach at Texas Tech, his alma mater, Cumbie said he had no hesitation jumping into a changing C-USA. MacIntyre described himself as excited about the league.

“It’s always reinvented itself over the years and it’s always flourished,” MacIntyre said. “And it’ll do that again.”