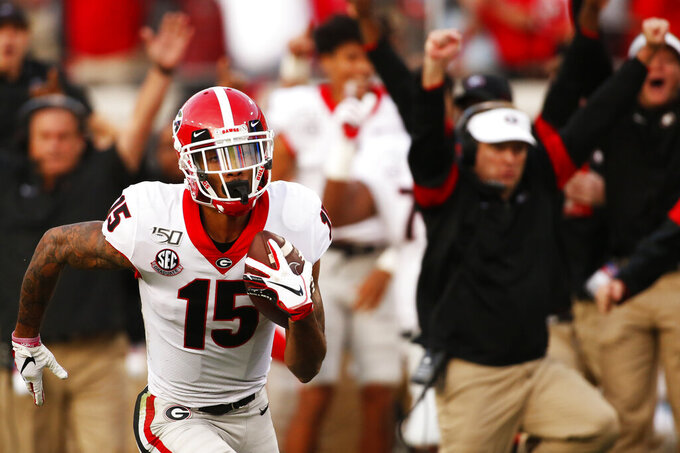 Georgia wide receiver Lawrence Cager (15) drives in for a touchdown as Georgia coach Kirby Smart celebrates at background right during the second half against Florida in an NCAA college football game Saturday, Nov. 2, 2019, in Jacksonville, Fla. (Joshua L. Jones/Athens Banner-Herald via AP) 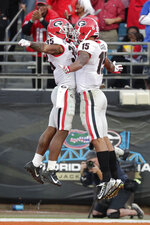 He couldn't have predicted he'd need to use the transfer portal to realize the dream.

Cager's emergence as Jake Fromm's go-to receiver has helped to clear No. 6 Georgia's path to another Southeastern Conference championship game.

Cager, the graduate transfer from Miami, set career highs with seven catches for 132 yards, including a 52-yarder for a touchdown, in the Bulldogs' 24-17 win over Florida last week.

"That's what every receiver dreams of," Cager said Monday of his career-best game.

It's all just as Cager planned. Well, almost.

Cager, from Baltimore, planned to follow his friend Van Jefferson to Georgia in 2015. Jefferson changed his mind on his commitment to the Bulldogs and instead signed with Mississippi before transferring to Florida two years ago. Georgia made other plans at wide receiver, and Cager signed with Miami.

Four years later, Cager's attention returned to Georgia. He saw a path for immediate playing time at Georgia, which lost its top five leaders in yards receiving from last season.

"Here was a better opportunity, I thought, for me than Miami," Cager said. "It hasn't been a disappointment.

"It's kind of funny because as a recruit I wanted to come here but receivers committed before I could. Now, having a good season here, at the school I wanted to come to from the jump, it's incredible."

Cager said former Miami teammates "reach out to me almost every day. That's still family over there. I love all those guys. I reached out to them as well when I heard they beat Florida State. It's always good to beat Florida State."

As defenses consistently stack the line against a running game led by D'Andre Swift, Cager could see more one-on-one matchups in remaining SEC games against Missouri, Auburn and Texas A&M. Georgia can clinch its spot in the SEC championship game by winning two of those three games.

Despite missing Georgia's win over Kentucky with shoulder and ribs injuries, Cager leads the Bulldogs with 26 catches for 377 yards and four touchdowns.

Cager said the chance to play for Georgia coach Kirby Smart and offensive coordinator James Coley "was a once in a lifetime opportunity."

"At the same time, getting to be a part of this team and having Jake as a quarterback, I couldn't have picked a better situation," he said.

Cager gives Fromm a big target, including on plays the receiver isn't the first option.

"Some of those plays Cager got, they weren't featured Cager plays," Smart said Monday. "He was the second, third, fourth option. ... Some of them, he was just the best option."

Cager's experience is important for the Bulldogs. Receivers Mecole Hardman, Riley Ridley and Terry Godwin and tight end Isaac Nauta were selected in this year's NFL draft. Jeremiah Holloman was kicked off the team.

Those departures made Georgia an ideal landing spot for receivers looking for a new home as graduate transfers.

"We had a couple reach out, but either it wasn't a comfortable marriage or we didn't know if they were going to be able to contribute," Smart said, adding in the case of Cager "we just felt comfortable that it was the right fit."