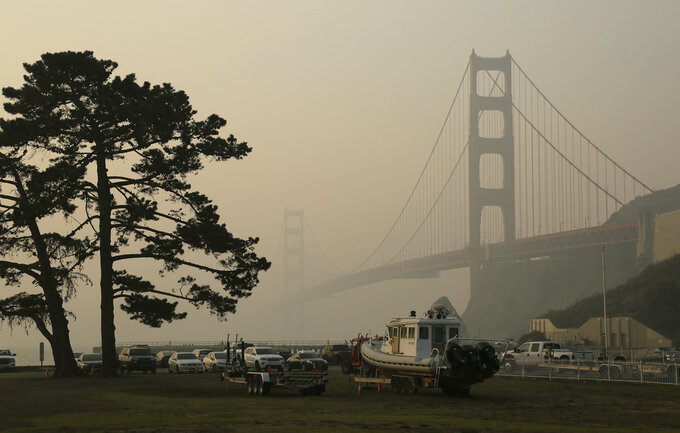 The Golden Gate Bridge is obscured by smoke and haze from wildfires Friday, Nov. 16, 2018, in this view from Fort Baker near Sausalito, Calif. (AP Photo/Eric Risberg)

BERKELEY, Calif. (AP) — The annual Big Game between Stanford and California scheduled for Saturday was postponed two weeks because of the unhealthy air quality in the Bay Area from a wildfire some 150 miles to the north.

Cal announced Friday that the game would be played Dec. 1 with a noon kickoff at Memorial Stadium.

"First and foremost our thoughts are with everyone who has been affected by the tragic California wildfires," Golden Bears football coach Justin Wilcox said in a Twitter post. "While we realize the importance of the Big Game right now, our thoughts are centered around so many who have been so deeply affected. Our primary factors in making the decision to postpone the game were centered around the health and safety of our student-athletes, fans and everyone involved in putting on the game. We look forward to seeing you in Berkeley on Dec. 1."

This is the just the second postponement of the Big Game between Cal (6-4, 3-4 Pac-12) and Stanford (6-4, 4-3). It was delayed one week in 1963 following the assassination of President John F. Kennedy. The rival schools have been playing each year since 1892 with the exception of breaks during World Wars I and II.

"The entire Stanford Athletics community recognizes this has been an extremely challenging time for so many people who have been affected by the wildfires, both in the Bay Area and throughout the state. Our thoughts are with them, first and foremost," Stanford athletic director Bernard Muir said. "We are thankful to the University of California for collaborating with us on the logistical challenges of rescheduling the Big Game, and are looking forward to playing the game on Dec. 1."

Stanford noted the schools tried to hold off a final decision until Saturday but the forecast shows air quality isn't expected to sufficiently improve.

The schools, which also utilized the NCAA and Pac-12 guidelines on air quality in making the decision, offered thoughts to those affected by the devastating Northern California fire.

"We have been carefully tracking air quality in Berkeley and the Bay Area over the past week, relying on the best data and guidance available to us from medical and environmental experts. The forecasts we have received show a minimal chance of the improvement necessary to hold the game on Saturday," Cal athletic director Jim Knowlton said. "While we would have preferred to play the Big Game on its scheduled date, once we realized that air quality would likely not return to acceptable levels, we made the decision to postpone for the health and safety of our student-athletes, coaches, gameday staff, students, band and spirit groups, alumni and fans."

In the NFL, the Oakland Raiders were unable to practice outdoors Thursday and Friday, so they instead held indoor walkthroughs. They play at Arizona on Sunday. The San Francisco 49ers have their bye week.

Cal and Stanford each also canceled men's basketball games, while the No. 7 Cardinal women's home basketball game Sunday against Ohio State was called off. The Buckeyes also had their scheduled game Friday night at Sacramento State canceled.

Several other college sporting events in Northern California were impacted this week. Some were moved, rescheduled or canceled.