Cal at Washington State canceled because of COVID-19 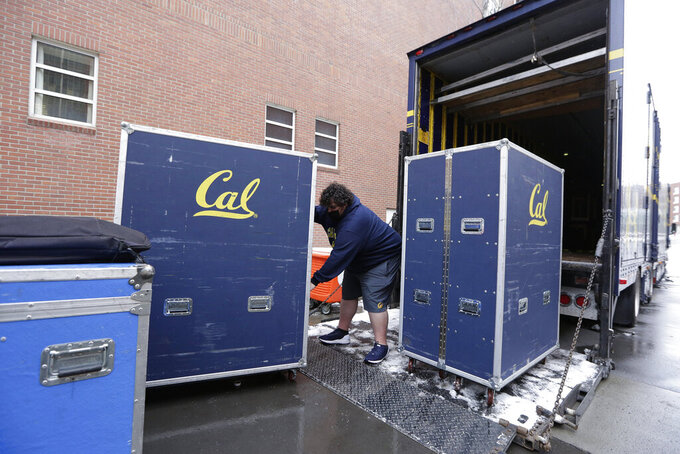 California equipment truck driver Dustin Sandoval loads equipment for his team into the trailer outside Martin Stadium after the NCAA college football game between Washington State and California was canceled due to COVID-19 positive testing and contact tracing on the California team, Saturday, Dec. 12, 2020, in Pullman, Wash. (AP Photo/Young Kwak)

PULLMAN, Wash. (AP) — California's game at Washington State was canceled less than two hours before kickoff on Saturday because of a case of COVID-19 on the Cal team, the Pac-12 said.

It's the third Washington State game that has been postponed or canceled because of the coronavirus pandemic.

Cal was not able to field enough scholarship players to meet the minimum threshold in order to play the game, the Pac-12 said. The Golden Bears had one player test positive and then additional players were sidelined because of contact tracing.

The case was confirmed via a PCR test on Saturday, the league said. The game was declared a no contest.

Cal (1-3) and Washington State (1-2) are struggling to qualify for postseason play. Neither team has an opponent set for next weekend.

“It's the right decision,” Washington State athletic director Pat Chun said. “We're always going to err on the side of caution as a conference.”

“With our team, to be Dec. 12 and have three games under our belt, this is 2020 football in a nutshell right now,” Chun added.

Washington State coach Nick Rolovich joked to the team's radio announcers that perhaps Cal and the Cougars should engage in a snowball fight in snowy Martin Stadium instead.

It would have been Cal's first snow game since 1996, also in Pullman.

“This is something very tough for a young person to go through consistently,” Rolovich said of the three WSU games that have been canceled.

California coach Justin Wilcox was not immediately available for comment and team spokesman Kyle McRae said no statements from the Cal program were expected Saturday.