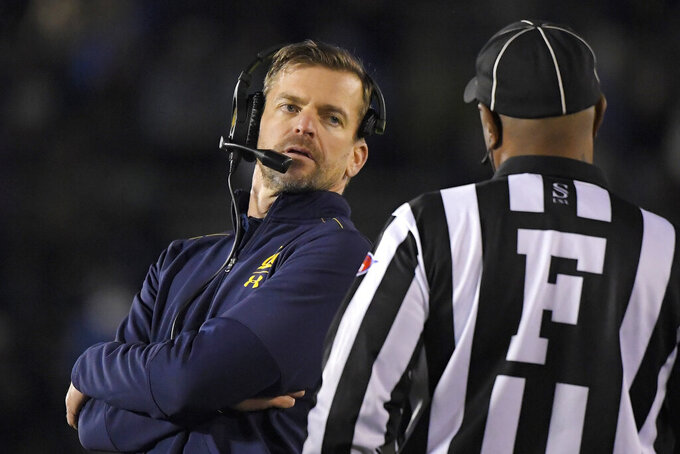 California coach Justin Wilcox, left, talks to an official during the first half of the team's NCAA college football game against UCLA on Saturday, Nov. 30, 2019, in Pasadena, Calif. (AP Photo/Mark J. Terrill)

SANTA CLARA, Calif. (AP) — As a defensive-minded coach trying to find his way in college football, California’s Justin Wilcox was naturally drawn to watching tapes of Lovie Smith’s teams at Illinois. When the two coaches got together a few weeks ago to promote Monday’s Redbox Bowl, Wilcox was like a kid at Christmas.

“I used to study him all the time. He’s an excellent coach,” Wilcox said. “We had a media event two weeks ago and I got to spend part of the day with him. I probably bothered him, I was asking so many questions, but it was really cool for me.”

Smith, whose coaching path has taken him to the NFL and back, is equally a fan of Wilcox and spent much of the past week heaping praise on his California counterpart.

The affinity between the two might also be a result of the similar seasons they’ve gone through this year as well.

Both the Golden Bears (7-5) and Fighting Illini (6-6) endured four-game losing streaks. Both dealt with starting quarterbacks who were in and out of the lineup because of injuries. And both had to rely on their defense to salvage their seasons.

Not surprisingly, both coaches see Monday’s game at Levi’s Stadium as an opportunity to build momentum for next season.

“Our program has made so many strides this year,” Smith said. “What a bowl victory would do would just give us momentum going into the next year as much as anything. We didn’t finish the season up the way we wanted, so to have a good taste in our mouth would be pretty important for us.”

Illinois feels a lot better about its chances now that quarterback Brandon Peters has been cleared to play. Peters sat out the team’s regular-season finale with a concussion, and there were concerns he would have to miss the Redbox Bowl before doctors approved his return.

“I don’t have any concerns because our medical staff, they did it the right way,” Peters said. “We went through all the steps that needed to be done. I feel fine. I feel great.”

A graduate transfer from Michigan, Peters passed for 1,611 yards and 17 touchdowns with seven interceptions. He’ll be facing a California pass defense that has been one of the best in the country over the past two seasons.

“One thing about Brandon, he’s even-keel and that’s a good thing. I saw that the first time we brought him over for a visit,” Smith said. “Just thought he would be a perfect fit for what we’re trying to do.”

Wilcox had similar feelings about Chase Garbers, who was part of a three-man quarterback rotation a year ago before settling in as the starter this season.

Like Peters, Garbers has been beset by injuries. He missed four games and parts of two others with a shoulder injury he suffered early in the year. The Bears are 6-0 this season when Garbers plays at least a full half.

California will be without three starters, two on defense and one on offense. Safety Ashtyn Davis had a minor medical procedure, outside linebacker Tevin Paul will also sit out and wide receiver Jordan Duncan was excused from the team for personal reasons.

The Bears have good depth at receiver and linebacker, but losing Davis is a serious blow. He was one of the leaders in Cal’s secondary and doubled on special teams as a kick returner. Cornerback Elijah Hicks has been practicing at safety and Camryn Bynum has spent time there as well.

Illinois has its own health concerns. Top wide receiver Josh Imatorbhebhe (33 catches, 634 yards, nine TDs) has been dealing with an unspecified injury and will be a game-time decision along with linebacker Jake Hansen, who has been out since Nov. 2.

California linebacker Evan Weaver has been a dominant force in the middle of the Bears' defense and is closing in on the NCAA single-season record for tackles. Weaver has 173 and needs 21 more to break the 17-year-old record of 193 held by Lawrence Flugence of Texas Tech. Coincidentally, Illinois linebacker Dele Harding is the second-leading tackler in the country behind Weaver with 147.

PAIRING IN THE BACKFIELD

Reggie Corbin and Dre Brown have formed a prolific 1-2 punch while splitting time in the Illinois backfield. Corbin has 634 yards and six touchdowns on 129 carries, while Brown tallied 545 yards and five TDs on 102 attempts.