California tries to get back on track against Oregon State 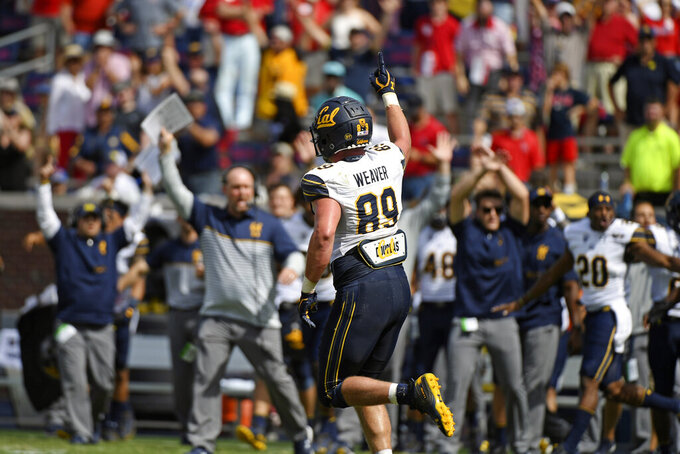 California linebacker Evan Weaver (89) celebrates after a tackle on the final play of an NCAA college football game against Mississippi in Oxford, Miss., Saturday, Sept. 21, 2019. California won 28-20. California used a goal-line stand as time ran out to beat Mississippi, the Bears’ first road win over an SEC school since 1977 and the Pac-12’s first since 2010. Linebacker Evan Weaver swooped in from the outside and stopped Mississippi quarterback John Rhys Plumlee on a sneak as the clock hit zeroes for the last and most important of his career-high 22 tackles.(AP Photo/Thomas Graning)

BERKELEY, Calif. (AP) — California safety Trey Turner III realizes time is running out for the up-and-down Golden Bears to make their mark in the Pac-12 this season.

After starting the season 4-0, including road wins at Washington and Mississippi, Cal has stumbled in consecutive losses to Arizona State and Oregon.

"This is the time where you make or break it," Turner said. "We're going to go on this run that we're determined to try to win out. That's our mindset. It's at that point to where every game matters. At this point you have to be dialed in and you have to execute week in and week out."

A win there would put Cal within one win of becoming bowl eligible for the second time in three seasons under coach Justin Wilcox.

As nice as that would be, quarterback Devon Modster wants the Bears focused solely on the Beavers.

"It's the next game we play so I think it's the most important right now," Modster said. "We're ready to go out and play. If we execute and do our job, we'll be good."

Oregon State is coming off a 52-7 loss at Utah. It was the Beavers' most lopsided loss of the season but have might been a wakeup call, coming on the heels of a 48-31 thumping of UCLA.

"Anytime you go into a game you want to play well and win, and we did not," Oregon State coach Jonathan Smith said. "It was disappointing and frustrating but what are you going to do? You have to move forward and learn from it. That's what these guys do."

Cal is 2-0 against Oregon State since Wilcox took over in 2017. Over the past five games between the two teams, the Bears have outscored the Beavers by an average of 46-26.

Wilcox shrugs all of that off, citing Oregon State's improved production across the board this season.

"They're much improved from a year ago," Wilcox said. "They're scoring a lot of points. They've got a really efficient quarterback, two good backs. They're going to come down here hungry."

Here are other things to watch for when Cal hosts Oregon State:

LUTON TO HODGINS: Beavers quarterback Jake Luton has already thrown for a career-best 14 touchdowns this season and had a streak of 181 consecutive throws without an interception before getting picked off by Utah. Luton's favorite target has been Isaiah Hodgins, the Pac-12's leading receiver, who is fourth in the country with 709 receiving yards. A big-play threat, Hodgins leads the nation with 35 catches of 10 yards or longer. That makes for a potential great matchup against Cal's secondary, which has allowed only three passing touchdowns this year.

THIRD AND TROUBLE: Cal has converted on only 32 of 88 third-down plays, barely more than 33%. A big reason is that the Bears have struggled on first and second downs, and that's left them far too often in 3rd-and-long situations. "Not to oversimplify it but it's the truth," Wilcox said. "We all know 3rd-and-long is difficult. We have to do a better job staying on schedule."

FAST START: Oregon State has scored on its opening drive in four of six games. The Beavers did that three times in all of 2018. Defensively, Smith's team has allowed opponents to score on their first drive just three times. It helps that the Beavers have done a great job protecting the ball. They've turned it over just twice all season, both on interceptions.

WEAVER THE WRECKER: Cal inside linebacker Evan Weaver has been dominant all season. He leads the country with 84 tackles and is second nationally with 48 solos. Weaver has had three games with 15 or more tackles.