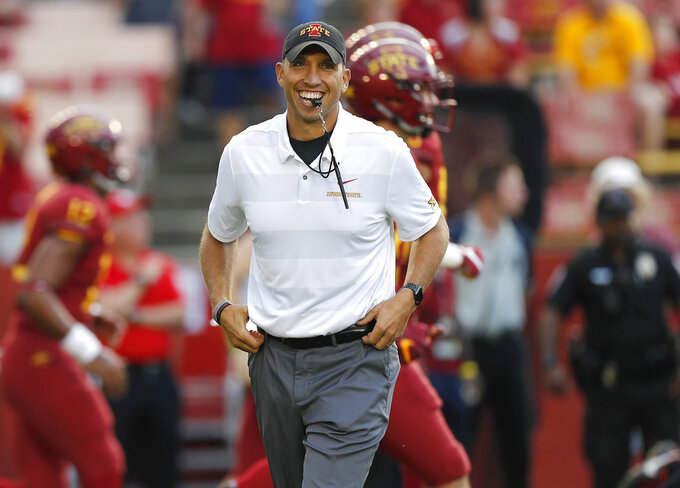 Iowa State's canceled opener on Saturday was its first in 55 years.
For coach Matt Campbell, it was the second time in four seasons that his first game was called off.
Campbell's opener while coach at Toledo was wiped out because of bad weather at halftime against Stony Brook in 2015. It didn't hurt the Rockets, who upset a ranked Arkansas on the road the following week, and Campbell is hoping it won't hurt Iowa State either for Saturday's game at rival Iowa (1-0).
The Cyclones couldn't even get through a quarter on Saturday against South Dakota State before lightning forced a 2 ½-hour delay that led the game to be called.
"You learn to keep your composure. It's such a unique situation. Your team is ready to play — you've actually started a game," Campbell said. "The emotions of wanting to play and then the emotion of not being able to play still takes an emotional toll on your team. Really (it's about) trying to get your kids back as soon as you can, understanding that you can't control what just happened...it's another challenge for any football team that had it happen to them."
Still, Iowa State got less than five minutes of playing time after an eight-month offseason while the Hawkeyes had 60 minutes to work out some jitters.
It undoubtedly helped Iowa, which struggled in the first half to work in a trio of backup tackles with starters Alaric Jackson and Tristan Wirfs suspended for the game. The Hawkeyes found their footing in the second half, rolling off 30 unanswered points in a 33-7 win over Northern Illinois that made Kirk Ferentz the winningest coach in Iowa history.
There was a school of thought that perhaps Iowa State might have gained a slight advantage in not putting much on film for Iowa to study — but it's not one shared by Campbell.
Iowa State wasn't the only team affected by Saturday's awful conditions, as former Big 12 rival and neighbor Nebraska also had to call off its opener.
"I would have loved the opportunity to play an entire football game. I think our team needs that," Campbell said. "Who has the advantage, you can spin it either way. But I really think, if you ask any coach, you want to play. You want to have the ability to start to build your fundamentals, see what your team looks like under a 60-minute adverse situation."
It wasn't a complete washout though, according to Campbell. Iowa State was at least able to have an entire week of game preparation, and some of the program's newcomers were able to experience the run-up to kickoff for the first time.
Campbell said the Cyclones almost have to view Saturday's cancellation as if their bye week was the first one of the season.
"One of the positives for us it that it was a really physical camp. We do have a veteran football team, and so we almost have to treat it that way," Campbell said.
That might prove to be the situation anyway. Iowa State has yet to take the idea of scheduling a game on Oct. 20, the end of their current bye week, off the table — although athletic director Jamie Pollard described the notion of finding an opponent on such short notice "difficult" in a letter to fans on Sunday.
The Cyclones could also extend their season by a week if they find themselves in need of a win for bowl eligibility after the scheduled regular-season finale against Kansas State on Nov. 24.
___
More AP college football: https://apnews.com/tag/Collegefootball and https://twitter.com/AP_Top25

By John Zenor 3 minutes ago
By Pete Iacobelli 2 hrs ago
2 hrs ago
By Ralph D. Russo 6 hrs ago
By Ken Powtak 19 hrs ago