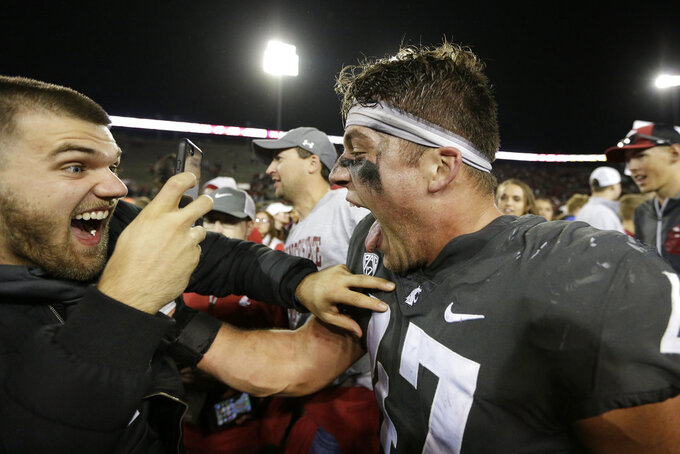 Here are some things to watch in the Pac-12 Conference this week:

GAME OF THE WEEK: Boosted by a statement-making victory over Oregon, No. 14 Washington State visits No. 24 Stanford on Saturday afternoon. The Cardinal popped back into the Top 25 following a victory over Arizona State on the road last weekend and the team is a slim favorite over the Cougars. Washington State may have been motivated by "GameDay" and all the hoopla surrounding the big game on the Palouse last weekend, but the momentum may indeed be greater on the Cougars' side as the lone Pac-12 team with only one loss.

MATCHUP OF THE WEEK: UCLA quarterback Wilton Speight against No. 23 Utah's defense. Speight, a graduate transfer from Michigan, started in the Bruins' season opener but then got sidelined by a back injury. He returned after freshman quarterback Dorian Thompson-Robinson appeared to injure his right shoulder in the second quarter of last weekend's victory over Arizona, and he could be back Friday night at the Rose Bowl against the Utes if Thompson-Robinson isn't ready to go. Utah is ranked seventh nationally for total defense, allowing opponents just 286.4 yards a game. The Utes rank first for run defense, allowing an average of 74.6 yards a game.

NUMBERS GAME: Washington QB Jake Browning has a 35-12 record as a starter and he's one shy of the Pac-12 career record for wins held by Oregon's Marcus Mariota and Stanford's Kevin Hogan. The No. 15 Huskies visit California this weekend. ... Utah swept the Pac-12 Player of the Week honors last week with quarterback Tyler Huntley, linebacker Chase Hansen and kicker Matt Gay all earning honors. It's just the fourth time since the conference started the weekly awards that a single team has swept. ... It's the second time this season that five Pac-12 teams have been ranked in the AP Top 25. ... Washington State and Utah both have three-game winning streaks. ... Stanford quarterback K.J. Costello has three 300-yard passing games this season, the most for the Cardinal since Andrew Luck had five in 2011. ... Arizona State has not allowed a single opponent to score more than 30 points this season, and they're one of just 12 teams nationwide to share the stat. The Sun Devils visit USC this weekend. ... Speaking of the Trojans, Clay Helton is a perfect 19-0 at the Coliseum. ... There are three Ducks with two interceptions apiece this season. Oregon visits Arizona on Saturday.

UPSET WATCH: It's sort of a lackluster week in the Pac-12 with a lot of clear favorites that should win. Stanford is just a 3-point favorite at home over Washington State, but the Cougars are focused and energized as the story of the week in the conference. Guessing Mike Leach has some tricks up his sleeve, too. Edge goes to Washington State.

IMPACT PERFORMER: In keeping with the all-Cougs, all-the-time theme here, Washington State's Gardner Minshew continues to impress. The graduate transfer leads the nation with an average of 36.29 completions per game, an average of 392.1 yards per game and an average of 398.4 yards total offense. He has thrown for 300-plus yards in seven straight games. As a result, he's climbing up many Heisman Trophy watch lists.