CB Bryce Thompson will travel to Vols' game at No. 9 Florida 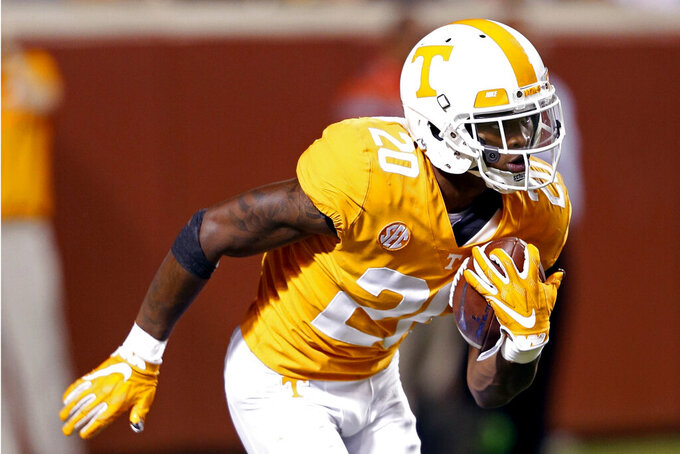 FILE - In this Sept. 22, 2018, file photo, Tennessee defensive back Bryce Thompson returns a kick during an NCAA college football game against Florida in Knoxville, Tenn. Thompson has been cleared to return to practice Wednesday, Sept. 11, 2019, less than three weeks after his arrest on a misdemeanor domestic assault charge. Thompson was arrested Aug. 24 and suspended indefinitely a day later. (AP Photo/Wade Payne, File)

KNOXVILLE, Tenn. (AP) — Tennessee cornerback Bryce Thompson will travel to the Volunteers' game at No. 9 Florida after getting arrested last month on a misdemeanor domestic assault charge.

Vols coach Jeremy Pruitt said Wednesday that Thompson will make the trip but noted that doesn't necessarily mean the sophomore will play Saturday. Pruitt said, "We're going to play these other guys, and one of these days Bryce will be back in shape and be ready to play, but it's going to take a little time for that to happen."

Thompson was suspended after his Aug. 24 arrest and returned to practice last week.

Pruitt said linebacker Jeremy Banks also will make the trip. Banks was arrested early Sunday morning after a traffic stop, as police said he had an active warrant for failure to appear in court from an earlier charge of driving with a suspended license.