Change in air: Strong-armed Dekkers taking over at Iowa St 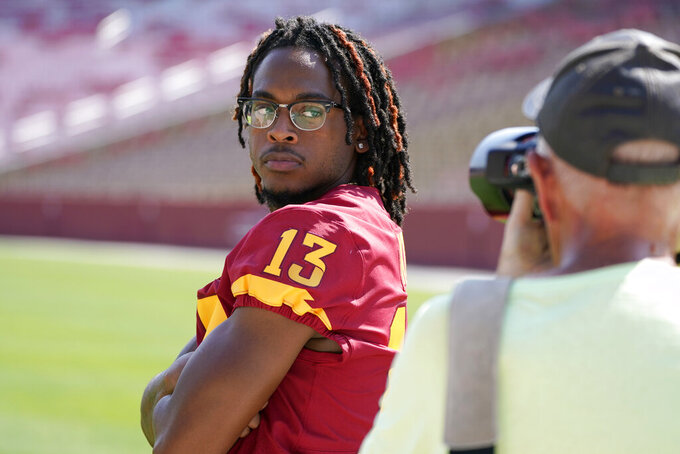 It's long been a foregone conclusion that Hunter Dekkers would be Iowa State's next starting quarterback.

His teammates praise him for his leadership skills and physical tools, and his coach says he's earned the trust of everyone in the program.

For all those positive vibes, it still would be reasonable to think there will be a drop-off when Dekkers becomes the Cyclones' first new starter since 2018. He is, after all, succeeding Brock Purdy, who led Iowa State to unprecedented heights as the school's winningest quarterback and holder of most of its passing records.

Coach Matt Campbell said he has a good feel for what he's getting in Dekkers, which is more than he can say about a number of other positions where new players are taking over for departed stars.

“People ask how we're going to be,” Campbell said, “and you're not going to know until we get into the season and we have to play in front of 70,000 people and have to execute our assignments and do our job.”

Dekkers was a four-star recruit coming out of the small northwest Iowa town of Hawarden and has appeared in seven games over two seasons. Of his 96 snaps, the most meaningful came last season after he took over for Purdy in the second half of a 10-point home loss to Iowa and in the second half of a seven-point loss at Oklahoma. Campbell said that experience, plus the work he's done on the practice field and weight room, has prepared Dekkers for the job.

“Brock has done a great job mentoring me through the good and bad,” Dekkers added. “He's shown me ways to handle things and some ways not to handle things. Learning from mistakes he made and learning from things he did really well are lessons I've taken in.”

Dekkers adds a new element with his ability to throw the deep ball, and he'll have one of the top targets in the country in Xavier Hutchinson. Though the Cyclones had the top passing offense in the Big 12 last season, Purdy built his numbers mostly with short and intermediate throws.

Dekkers, who cut his weight from 235 pounds to 206 in the offseason, also brings a knack for being creative. Teammates see him as a football version of a crafty left-hander.

"I don't think he has a ceiling,” defensive lineman J.R. Singleton said. “I've been back there in spring ball. I think I got him sacked and he'll just make some crazy, ridiculous throw. His arm talent is through the roof.”

Jirehl Brock has the inside track to succeed All-America running back Breece Hall after appearing in every game and starting the Cheez-It Bowl. Eli Sanders, Deon Silas and Cartevious Norton also are in the mix.

ON THE OTHER SIDE

Will McDonald IV is one of the nation's top pass rushers, and it was a mild surprise when he decided to return to Ames rather than declare for the draft.

The defensive end spot opposite McDonald is a question mark. Blake Peterson is first in line. Though Peterson was a four-star recruit coming out of Beresford, South Dakota, he said the physical adjustment and learning curve since arriving in 2019 has been significant.

“The whole recruiting thing doesn't matter to me," he said. "It was a big transition from high school playing against tackles that are 160 pounds to guys twice that weight in the Big 12.”

The Cyclones open Sept. 3 at home against Southeast Missouri State before traveling to Iowa for the annual Cy-Hawk game. Their toughest Big 12 games are at home, Sept. 24 against defending champion Baylor and Oct. 29 against Oklahoma.