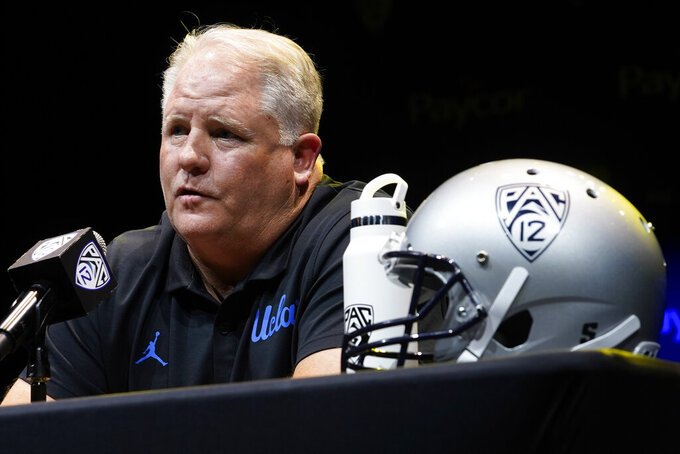 FILE - UCLA coach Chip Kelly speaks during the Pac-12 Conference NCAA college football media day on July 29, 2022, in Los Angeles. Kelly enters his sixth season as the Bruins’ coach after winning eight games a year ago. UCLA and USC are playing their final season in the Pac-12 before leaving for the Big Ten. (AP Photo/Damian Dovarganes, File)

The last major change in the Pac-12 came with the addition of Colorado and Utah in 2011, an expansion met with excitement.

The latest bit of realignment feels a lot different.

UCLA and Southern California aren't leaving for the Big Ten until 2024, but there's already an uncomfortable air out West.

The Pac-12's future is still up in the air, whether it's standing pat with 10 teams, expanding or losing more schools to other major conferences.

The main goal will remain no matter what schools are still there: getting through to the College Football Playoff.

The Pac-12 has put two teams through to the CFP and none since Washington lost to Alabama in the 2017 national semifinals. The conference's last national champion was USC in 2005.

“This conference has been really deep and it’s really hard to run the table in this conference,” Stanford coach David Shaw said. “Maybe other conferences it’s easier playing eight conference games, maybe the conference is not quite as deep. You have three games to get up for every year. Our conference, if you slip up, you’re going to get beat.”

Utah won the Pac-12 championship a year ago and is favored to win it again, picked first in the preseason media poll.

Quarterback Cameron Rising's return is a big reason why.

As a sophomore, he threw for 2,493 yards and 20 touchdowns with just five interceptions. Rising had the Utes in position to knock off Ohio State in the Rose Bowl on New Year's Day, but went out in the fourth quarter after his head slammed to the turf as he was sacked. The Buckeyes won 48-45 with Rising on the sideline.

Rising completed nearly 64% of his passes last season and has added arm strength so he can take more deep shots down the field this year.

“Cam means so much to our football team,” Utah coach Kyle Whittingham said. “Off the field he’s the leader of the leaders, the alpha dog of our team, really sets the standard. You couldn’t ask for a better leader.”

USC finished 4-8 last season and coach Clay Helton was fired after an early-season loss to Stanford.

The Trojans have reloaded and are one of the favorites to win the Pac-12 this season.

USC lured Lincoln Riley from Oklahoma to lead the resurgence and added 24 veteran transfers from programs across the country. Among them are Pitt's Jordan Addison, who won the Biletnikoff Award as the nation's best receiver last season, and Oklahoma quarterback Caleb Williams, among the favorites to win the Heisman Trophy this year.

Oregon has a new coach, lost one of the nation's best defensive players and has questions at quarterback.

Don't expect it to slow down the Ducks.

Dan Lanning takes the reins after Mario Cristobal left for Miami and inherits a program still oozing with talent.

Oregon has key players returning on both sides of the ball and added Auburn transfer Bo Nix, the frontrunner to win the quarterback competition with redshirt freshmen Ty Thompson and Jay Butterfield.

Replacing defensive end Kayvon Thibodeaux, the fifth overall pick in the NFL draft, will be difficult, but the Ducks have one of the conference's best linebackers in Noah Sewell and a talented front seven.

“I feel like we have the talent to be competitive in the games we’re going to play in,” said Lanning, Georgia's former defensive coordinator and linebackers coach. “Doesn’t mean we have to play our best game every single week, but we want to improve. I want to see measured growth.”