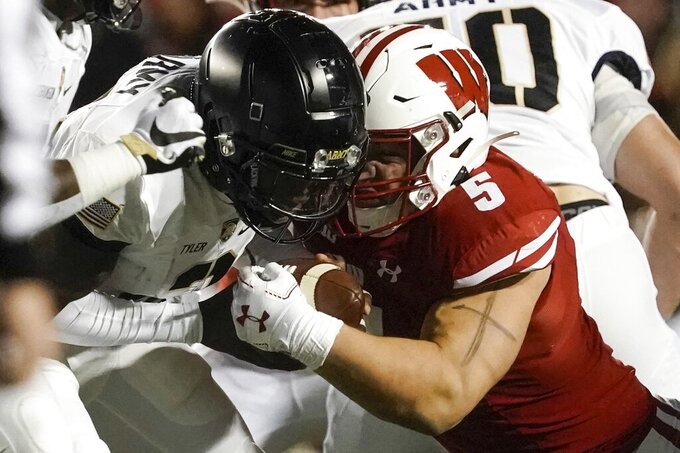 MADISON, Wis. (AP) — The one big weakness of Wisconsin’s otherwise outstanding defense this season has been its inability to force turnovers.

But the Badgers finally produced a takeaway at a critical moment Saturday late in the fourth quarter and outlasted a pesky Army team 20-14.

Army (4-2) trailed 13-7 and had the ball when Leo Chenal delivered a punishing hit that knocked the ball loose from quarterback Jabari Laws. Wisconsin’s Keeanu Benton recovered the fumble at Army’s 1-yard line with 2:55 remaining.

On the next play, Graham Mertz scored on a quarterback keeper for his second touchdown run of the night.

“It was definitely the game-changing moment we needed,” Benton said.

Wisconsin (3-3) entered the weekend having allowed the second-fewest yards per game of any Football Bowl Subdivision program, but the Badgers were among the nation's worst teams at forcing turnovers.

Laws' fumble was just Wisconsin's fourth takeaway of the season.

“We always want to be going for that ball,” said Chenal, who also had a career-high 17 tackles. “We need to be creating more turnovers than we are right now.”

Army cut the lead to 20-14 on A.J. Howard's 6-yard touchdown run with 38 seconds left, but Jack Sanborn recovered the ensuing onside kick to seal the victory.

“When we practiced it this week, I actually messed up that exact same play and our onside team recovered it in practice,” Sanborn said. “I told everyone that I got it out of the way that day and that Saturday I would get it. I knew it was coming my way.”

Wisconsin’s Braelon Allen rushed for 108 yards on 16 carries, including a 33-yard touchdown.

This marked the second straight game in which Allen rushed for at least 100 yards. The 17-year-old freshman ran for 131 yards and a touchdown on 18 carries last week in a 24-0 victory at Illinois.

“I definitely feel myself getting more comfortable and confident,” Allen said. “My line's done a great job. I've had huge holes to run through these past two weeks.”

Army (4-2) played a second straight game without usual starting quarterback Christian Anderson, who is dealing with a shoulder injury. The Black Knights lost 28-16 to Ball State without Anderson two weeks ago.

Tyhier Tyler and Laws both played quarterback in Anderson’s absence. Tyler started, played most of the game and rushed for 90 yards on 17 carries. Laws had all of Army’s pass attempts and went 5 of 6 for 87 yards.

But the Black Knights once again came up just short against a Power Five team. Army lost in overtime to Oklahoma in 2018 and in double overtime at Michigan in 2019 before falling 24-21 to West Virginia in last season's Liberty Bowl.

“Our team expected to win,” Army coach Jeff Monken said. “The only people that are shocked are the guys in our locker room. Shocked that they didn't win. Our guys expect to win the game. That's just the way they roll.”

Wisconsin (3-3) led 13-0 at halftime and outgained Army 230-48 in the first two periods before the Black Knights rallied, thanks to Tyler’s tenacity.

Tyler took a big hit while executing a pitch early in the fourth quarter and stayed on the ground for a few minutes before walking to the sideline under his own power. Monken said Tyler had the wind knocked out of him.

After sitting out just one play, Tyler returned to the game and promptly raced 36 yards on a keeper. Two plays later, Tyler ran into the end zone from 5 yards out on third-and-goal to cut Wisconsin’s lead to 13-7 .

Wisconsin announced before the game that reserve running back Isaac Guerendo will miss the remainder of the season due to a injured left leg.

Guerendo hadn’t played since a 38-17 loss to No. 8 Michigan on Oct. 2. He finishes the season with 160 yards rushing on 23 carries, including an 82-yard touchdown against Eastern Michigan.

Army: Although his team lost the game, Andre Carter continued his outstanding season by forcing a fumble on a sack and blocking an extra-point attempt. Carter increased his season sack total to 8 ½. He entered the weekend leading all Football Bowl Subdivision players in that category.

Wisconsin: The Badgers won thanks to huge efforts from their two outstanding inside linebackers. Chenal delivered the best performance of the night, but Sanborn added 12 tackles and a couple of big plays on special teams. Before recovering an onside kick in the closing seconds, Sanborn took a snap and ran 8 yards on a successful fake punt attempt that set up a second-quarter touchdown.

Wisconsin: At Purdue on Saturday.