Chip Kelly gets 1st win at UCLA, 37-7 over California 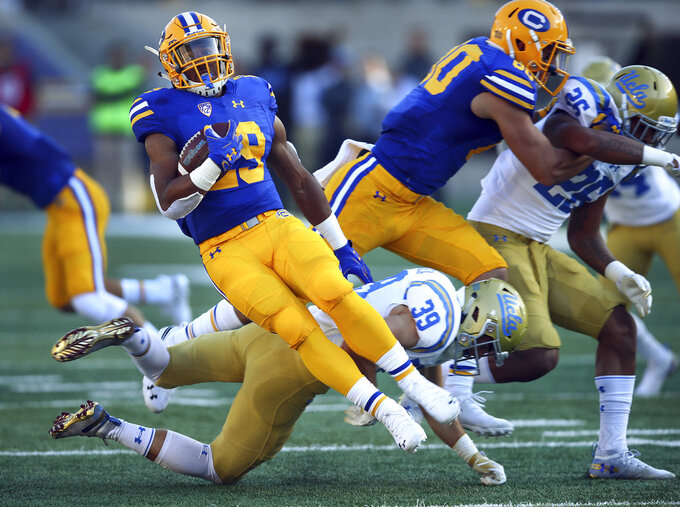 California running back Marcel Dancy, front left, gets turned around by UCLA's Ethan Fernea (39) during the first half of an NCAA college football game Saturday, Oct. 13, 2018, in Berkeley, Calif. (AP Photo/Ben Margot) 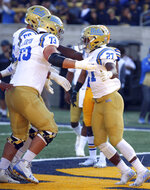 BERKELEY, Calif. (AP) — The final seconds of UCLA's first win of the Chip Kelly era ticked off and the Bruins gathered to celebrate with their traveling fans before performing a rousing rendition of their fight song in the locker room.

After five straight losses to open the season, this celebration was a long time coming.

Joshua Kelley ran for 157 yards and three touchdowns, the defense had four of its five takeaways in the second half and Kelly earned his first win as a college coach in more than five years by beating California 37-7 on Saturday.

"For me, it just hit home when we celebrated with the student section that traveled here," Kelley said. "When we sung that fight song, it felt right. It felt right man."

The Bruins (1-5, 1-2 Pac-12) entered the day one of four winless teams in the FBS as part of their worst start since 1943. But UCLA dominated the trenches against the Golden Bears (3-3, 0-3) to give Kelly his first win as a college coach since leaving Oregon for the NFL following the 2012 season.

Kelley scored on a 5-yard run to cap a 59-yard drive set up by a fumble by Patrick Laird in the first quarter. Then, after Cal finally got on the board with Laird's 1-yard run on the opening drive of the second half, Kelley and the Bruins answered with two straight scoring drives capped by Kelley's 1-yard runs that made it 27-7.

He has been a bright spot in a down season for UCLA, becoming the first Bruins player with three straight 100-yard games since Jordon James in 2013.

Keisean Lucier-South put the capper on the rout with a 38-yard fumble return for a score after one of Cal's five turnovers.

The Bears dropped their third straight conference game after starting the season 3-0 and getting into the AP rankings for the first time since 2015. The offense struggled for any consistency outside of the 75-yard drive to open the third quarter. Cal was stopped twice on fourth-and-short in the second half, dooming any hopes of a comeback.

Brandon McIlwain completed 22 of 40 passes for 168 yards but was held to minus-2 yards rushing, lost two fumbles and threw two interceptions.

UCLA: Bruins freshman QB Dorian Thompson-Robinson was very efficient. He completed 13 of 15 passes for 141 yards including one that deflected off receiver Michael Ezeike's hands and right to teammate Caleb Wilson to set up Kelley's first TD. He also did damage with his legs, including a 20-yard run that helped set up one of Kelley's second-half scores.

"Each week he's gotten better the more experience he gets," Kelly said.

California: The first-half woes for the Bears could be summed up on a late drive. In the closing seconds, Kanawai Noa tried to fight for extra yards instead of going out of bounds on a sideline catch. That forced Cal to spike the ball on third down at the 15. Greg Thomas came on for a 32-yard field goal and hit the upright after being iced with two timeouts, leaving Cal scoreless at the half.

"We couldn't get anything going in the first half, didn't really get anything started and, for whatever reason that is, it really wasn't there and we've got to figure out a way to get it back," McIlwain said.

"We knew we could play like this. It was just about finding that rhythm and everyone doing their job. Guys in the previous weeks were just trying to overcompensate for somebody else's job instead of just doing theirs." — Thompson-Robinson.

Lucier-South did a little of just about everything in the fourth quarter defensively for the Bruins. He intercepted a pass on fourth-and-1 to stop one drive. The then scooped up the fumble and returned it for his first career touchdown. He then added a strip-sack.

Cal freshman linebacker Chris Fatilua, who suffered a serious spinal cord injury during a swimming accident in June, got a warm ovation from the crowd in his first appearance at Memorial Stadium. He was hurt just before starting his college career.

"There's a lot of emotions that go on, just overwhelming really but just really happy to be out here and be with the guys, just really grateful," he said.