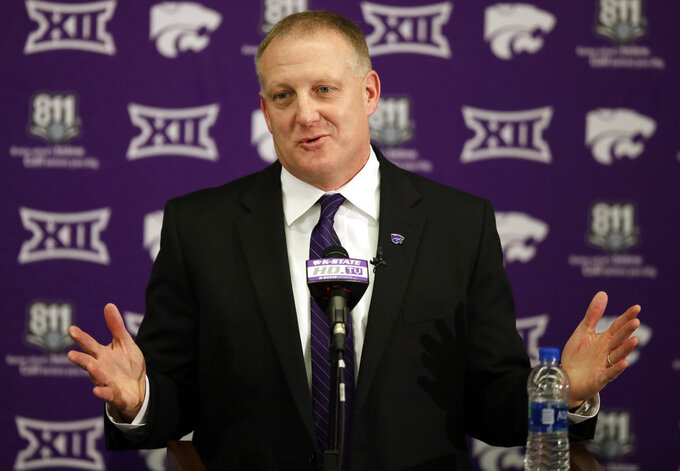 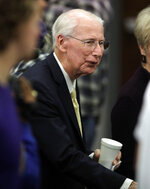 MANHATTAN, Kan. (AP) — Chris Klieman needed no better reminder of the monumental task ahead of him Wednesday than the one sitting in the front row of his introductory news conference at Kansas State: Hall of Fame coach Bill Snyder.

Klieman was hired this week to replace what Wildcats athletic director Gene Taylor called "a legend." Snyder won 215 games during two tenures lasting 27 seasons, and a large statue of him sits just outside the recently renovated football stadium that now bears his name.

"I've looked up to Coach Snyder since the early '80s, growing up in Waterloo, Iowa," he said. "Coach was working for Hayden Fry and I'd go attend his camps and stand in the quarterback line and spin it around and talk to him a little bit.

"I know the shoes I have to fill," Klieman added, turning toward Snyder in a packed auditorium. "I'm going to make you proud, Coach."

Klieman was hired after winning three national titles in his first four seasons at North Dakota State. And he will have a chance to continue the pursuit of a fourth when he returns to Fargo to lead the Bison in Friday night's national semifinals against South Dakota State.

It will cap what has been a whirlwind week.

Klieman accepted the job Monday night, right in the midst of a practice, then took a late flight to Kansas State on Tuesday. He was greeted by fans at the airport, had a team meeting with returning players and spent Wednesday morning in a series of staff meetings. The early signing period begins Dec. 19.

He planned to spend the rest of the week with North Dakota State while simultaneously laying the groundwork at Kansas State, including the piecing together of a coaching staff.

Klieman's hiring has been met with tepid response from who wonder whether a coach with little experience in major college football can succeed.

"I'm still going through my email," said Taylor, who also hired Klieman to succeed Craig Bohl at North Dakota State. "I had about 300 and now I'm down to about 120. What I love about it is our fans passion and they care a great deal, which is what makes this a special place."

Klieman said he understands their concerns. But after helping the Bison beat the Wildcats as their defensive coordinator in 2013, he made it clear that "football is football."

"Our whole team is already on board and we are ready to get back here in January," said Kansas State quarterback Skylar Thompson, who attended the press conference. "What sticks out to me the most is how much he talks about winning and wanting to win national titles here."

Taylor emphasized that Klieman has great credentials, including a sterling 67-6 record with the Bison that includes wins over such Power Five programs as Iowa. But it ultimately came down to fit, and Taylor thought Klieman was the best candidate for Kansas State.

There are no doubt challenges at Kansas State, many of which Snyder was able to overcome. The school has a local airport but is a long drive from a major metropolitan area, and only a handful of Division I recruits are produce within the state each year.

But he also went head-to-head with big-name schools in recruiting at North Dakota State, and he pointed out that three years ago he coached quarterback Carson Wentz, the No. 2 pick in that draft.

"You don't always need five-star recruits," Klieman said, "but you need guys that have great character, leadership and hold each other accountable. Make no mistake about it, when you put guys between the lines there is no one looking across the field wondering what star recruit a guy was.

"I know many people in Oklahoma and Texas," he added, "so I will be getting a hold of them soon to help me out."

Klieman acknowledged the challenge of being the head coach of two programs simultaneously, but he learned a bit about how to handle it from Bohl, who left North Dakota State to take over at Wyoming.

"We still have some work to do at North Dakota State and part of the reason I'm here is because of the support I have there," Klieman said. "I love every one of those kids, but they know this is a great opportunity and wanted me to do this today and be ready for a game on Friday."