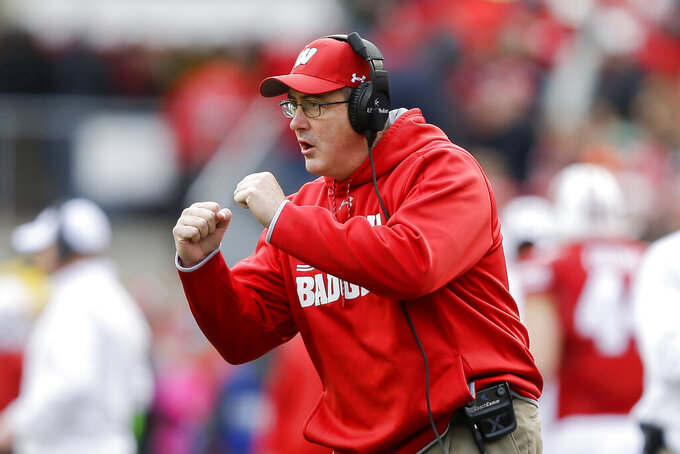 FILE - In this Oct. 12, 2019, file photo, Wisconsin head coach Paul Chryst gestures during the first half of an NCAA college football game in Madison, Wis. Wisconsin will head into spring practice with plenty of questions as the Badgers attempt to replace their top playmakers from a team that reached the Rose Bowl last season. (AP Photo/Andy Manis, File)

MADISON, Wis. (AP) — Wisconsin will head into spring practice with plenty of questions after losing much of the star power from a team that reached the Rose Bowl last season.

“I’m anxious to see kind of who kind of emerges as genuine leaders of this team,” coach Paul Chryst said Monday.

Yet he also is remaining patient.

That was evident from his decision to adjust the Badgers’ spring schedule and push back the start of workouts.

Wisconsin initially planned to open spring practice Tuesday. Chryst said the team instead won’t hold its first workout until March 22 to give players more time to make the transition from offseason conditioning to actual practices.

“I think we kind of need this week and next week to transition to try to make the most of the spring practice opportunities we get,” Chryst said.

Wisconsin’s toughest task is trying to replace one of college football’s most prolific all-time rushers in Jonathan Taylor.

Taylor entered the draft after his junior season but still ranks sixth among all Football Bowl Subdivision players in yards rushing with 6,174. The two-time Doak Walker Award winner is the first FBS player to rush for at least 6,000 yards in only three seasons.

Wisconsin’s top returning rusher is Nakia Watson, who ran for 331 yards and two touchdowns on 74 carries. Garrett Groshek is back after contributing 42 carries for 194 yards and 29 catches for 289 yards last season. This spring also represents a chance for Julius Davis to make his case after redshirting last season.

Chryst wouldn’t speculate on whether he’d prefer to use one featured back or distribute the carries more equally. Wisconsin opens the season Sept. 4 by hosting Indiana.

“I’m not going to worry right now in how we’re going to try to play the fall,” Chryst said. “All those guys will get great work in the spring.”

Taylor isn’t the only notable player Wisconsin loses on offense.

Wide receiver Quintez Cephus and All-America center Tyler Biadasz also bypassed their final seasons of eligibility to enter the draft. Cephus had more than twice as many yards receiving and nearly twice as many catches as any of his teammates last year.

That means Wisconsin’s hopes of winning at least 10 games for the sixth time in seven seasons could depend on whether a quality defense gets even better.

One of those returners and potential leaders on defense is safety Eric Burrell, who will miss spring practice as he recovers from an injured left arm. The defense also will be missing safety Scott Nelson and nose tackle Bryson Williams this spring as they continue to come back from leg injuries that sidelined them for much of the 2019 season.