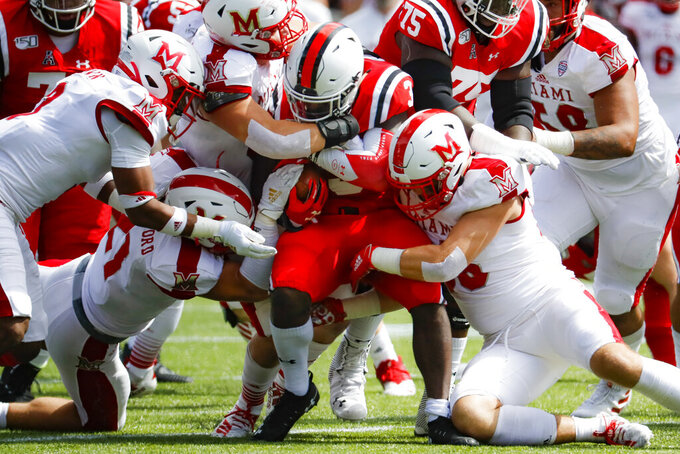 Cincinnati running back Michael Warren II, center, is tackled in the first half of an NCAA college football game against Miami of Ohio, Saturday, Sept. 14, 2019, in Cincinnati. (AP Photo/John Minchillo)

CINCINNATI (AP) — Michael Warren II scored three touchdowns and Cincinnati overcame a sluggish start for a 35-13 win over its oldest rival, Miami of Ohio, on Saturday, the Bearcats' 14th straight win over the RedHawks.

Cincinnati (2-1) suffered a 42-0 loss to Ohio State last week and was scoreless against the RedHawks after the first quarter, falling behind 10-0.

Ridder was 14 of 30 for 186 yards passing. He threw one interception, the only turnover of the game.

Miami's Tyre Shelton scored his first collegiate touchdown on a 1-yard plunge to give the Redhawks the early lead.

Miami's Brett Gabbard completed his first six passes but was sacked four times. He missed on his first six attempts in the second half when Miami only managed a field goal. Gabbard finished 10 of 18 for 143 yards.

A pair of brothers were on opposite sidelines: Cincinnati linebacker Kyle Bolden and younger brother, Luke, who started at linebacker for the RedHawks. Their father, Tom, is a celebrated high school coach at Cincinnati's Colerain High. Their cousin Joe Bolden was a standout linebacker at Michigan and his brother Dan is a linebacker at Toledo.

Miami has had several famous coaches in its history. Paul Brown, Woody Hayes, Bo Schembehler and Ara Parseghian coached in Oxford. John Harbaugh of the Baltimore and Sean McVay of the Los Angeles Rams are former RedHawks.

Two of Cincinnati's starting offensive lineman come from overseas. Lorentz Metz is from Germany where he had just two years of club football experience. Chris Ferguson is from Nassau, Bahamas. He is a sixth-year redshirt who played one year of high school football.

Cincinnati is celebrating the oldest rivalry west of the Allegheny Mountains by wearing vintage uniforms from the late 1950s and early 60s. This is the oldest nonconference rivalry in the FBS.

The teams met on Dec. 8, 1988 in Oxford, the first college football game in the state of Ohio. They have played each other every year since 1945.

Miami: The Redhawks will travel to play Ohio State next Saturday. The Redhawks last played the Buckeyes in 2012 in a 56-10 loss.

Cincinnati: The Bearcats will be on the road for a Sept. 28 game at Marshall.