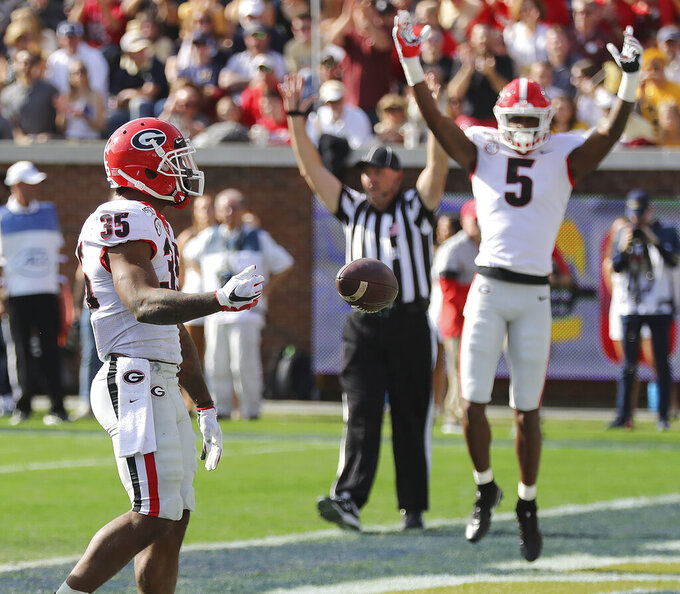 Georgia tailback Brian Herrien scores while teammate Matt Landers and the official signal the touchdown for the early 10-0 lead over Georgia Tech during the first quarter in a NCAA college football game on Saturday, November 30, 2019, in Atlanta. (Curtis Compton/Atlanta Journal-Constitution via AP) 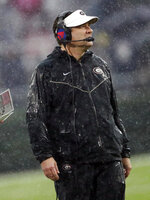 ATLANTA (AP) — LSU is perfectly comfortable in an offensive shootout, both teams racing up and down the field, throwing caution to the wind and lighting up the scoreboard with big play after big play.

Georgia would prefer a defensive quagmire, where every yard in a struggle, the sort of knock-'em-back stalemate that puts a premium on old-school concepts like field position and turnovers.

In that never-ending debate over what's more important — offense or defense? — the Southeastern Conference championship game offers a most compelling match-up.

“When you come out of the SEC and represent your programs in this game, you've been through the gauntlet,” Georgia coach Kirby Smart said.

LSU is averaging 48.7 points — trailing only Ohio State — with a high-octane spread offense led by Heisman Trophy favorite Joe Burrow and a pair of 1,000-yard receivers.

It has been a stunning turnaround for a program long known for its stalwart defense but one that often struggled to put points on the board.

The last LSU team to go undefeated during the regular season was the 2011 Tigers, who were totally stifled by Alabama in the national championship game. That team lost 21-0 and did not even cross midfield until the closing minutes.

What a contrast to this team, which has twice eclipsed 60 points, scored at least 50 in four other games and has been held below 36 just one time.

The Tigers have no intention of backing off against the Bulldogs, though Burrow offered a bit of a caveat.

Georgia's previous opponents can attest to that.

The Junkyard Dawgs are surrendering a puny average of 10.4 points — second only to Clemson — and have recorded three shutouts for the first time since 1981. They have not given up more than 17 points in regulation (their only loss, a 20-17 setback against South Carolina, went to double overtime).

“We've done some amazing things as a defense in this regular season," Georgia safety J.R. Reed said. “We've got our work cut out for us this game.”

As is always the case with the SEC championship, the winner is surely headed to the College Football Playoff.

But many pundits believe LSU, which has high-quality victories over Alabama, Florida and Auburn, has already done enough to claim a spot.

So a Georgia upset could mean a postseason two-fer for a conference that already holds super-sized influence over the college football landscape.

“We've got to finish the SEC championship, and then let's see where we're ranked," LSU coach Ed Orgeron said. “None of that stuff matters right now. We've got to win this football game. This is a big football game for our team, and that's all we're thinking about.”

Some things to keep an eye on when the Tigers face the Bulldogs:

LSU’s 35th-ranked defense looked like a liability much of the season — particularly in mid-November at Ole Miss, when the Tigers allowed 614 yards and 37 points.

The last game was a different story, however. LSU surrendered just 169 yards, picked off three passes and came recorded six sacks — one for a safety — in a 50-7 rout of Texas A&M, which came in averaging 32.1 points per game.

“Too bad it came late in the season, but it’s only going to get better,” edge pass-rusher K’Lavon Chaisson said. “There’s too many high-caliber players on this defense to where we shouldn’t be clicking how we wanted to click.”

It's been a strange year for Georgia quarterback Jake Fromm, who has struggled to find the level of consistency he showed his first two seasons.

The last four games have really been a puzzler. Fromm has thrown 10 touchdown passes with no interceptions, but he's failed to complete 50% of his throws in any of those contests.

Before this stretch, he only had three games in his entire career when he didn't connect on half his passes.

Fromm's struggles have come under extra scrutiny because of Justin Fields' stellar season at Ohio State. He was Fromm's backup a year ago, but failed to get much playing time and transferred to the Buckeyes.

Georgia star D'Andre Swift has rushed for 1,203 yards, but he left last week's victory over Georgia Tech with an injured shoulder.

Smart downplayed the injury, saying it was merely a contusion.

“I expect D'Andre to be fine,” the coach said.

If Swift is still hurting, it will fall to Brian Herrien, James Cook and Zamir White to pick up the slack.

The Bulldogs know they'll be limited in the receiving corps. Lawrence Cager is likely done for the season after ankle surgery, while freshman George Pickens must sit out the first half after getting ejected from the Georgia Tech game.

With so much attention on Burrow and JaMarr Chase, a Biletnikoff Award finalist at receiver, opposing defenses often seem to lose track of diminutive but dangerous scat back Clyde Edwards-Helaire.

Orgeron and Burrow often compare LSU’s use of Edwards-Helaire to the New Orleans Saints’ use of Alvin Kamara. That seems apt because Joe Brady, one of LSU’s new offensive assistants, spent the previous two seasons on the Saints’ staff.

When these teams met during the 2018 regular season, LSU romped to a 36-16 victory in Baton Rouge.

It will be interesting to see if the Bulldogs are still smarting from a game that happened nearly 14 months ago.

“I’m sure they’re going to want some revenge on us," Burrow said. "But it’s the SEC championship. I don’t think you need any more motivation.”