Clemson-Alabama IV has precedents in other sports 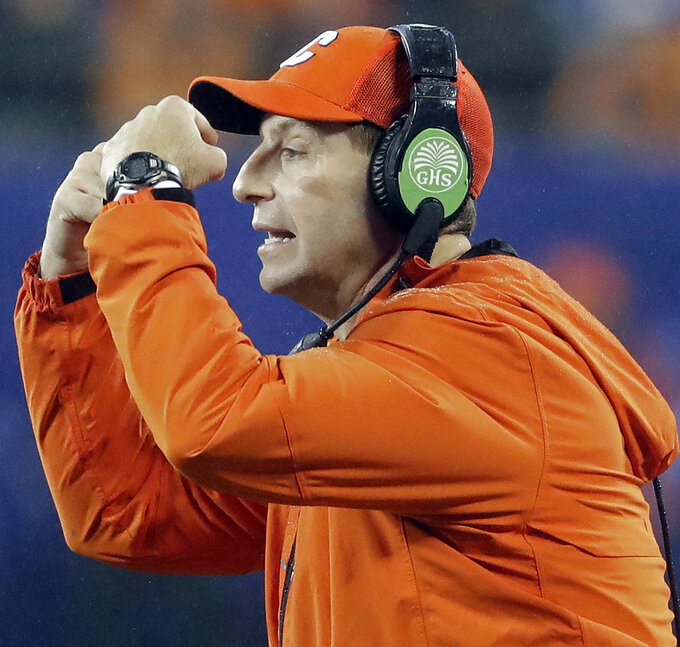 FILE - In this Dec. 1, 2018, file photo, Clemson head coach Dabo Swinney directs his team against Pittsburgh in the first half of the Atlantic Coast Conference championship NCAA college football game, in Charlotte, N.C. The Tigers are set to square off against the Crimson Tide for the fourth straight year in the College Football Playoff in Monday night's, Jan. 7, 2019, title game. While most of the players have changed since Alabama won the first meeting for the championship in January 2016, the coaches have remained the same. (AP Photo/Chuck Burton, File) 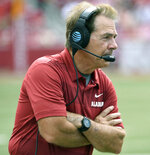 SANTA CLARA, Calif. (AP) — LeBron vs. Steph in the spring, Dabo vs. Nick in the winter.

As much as Cleveland and Golden State became annual opponents in the NBA Finals before James left the Cavaliers last summer to join the Los Angeles Lakers after losing the title for the third time in four years to Curry and the Warriors, Clemson and Alabama have squared off in the winter to help determine college football's champion.

The Tigers are set to square off against the Crimson Tide for the fourth straight year in the College Football Playoff in Monday night's title game. While most of the players have changed since Alabama won the first meeting for the championship in January 2016, the coaches have remained the same.

Alabama's Nick Saban won the championship the first year before Clemson's Dabo Sweeney got his first championship a year later. The Tide won in the semifinals last season and now the teams are set to meet again.

"There are going to be a lot of similarities as far as the blueprint of the game plan because the head coaches are the same," said Mount Union coach Vince Kehres.

If anyone knows what Alabama and Clemson are going through this week it would be the staffs that were at Mount Union and Wisconsin-Whitewater when they played for the Division III championship seven straight years from 2005-11.

Kehres was defensive coordinator under his father, Larry, during that run when Mount Union won the first two meetings and three of the first four. Whitewater then took the next three titles before Mount Union beat St. Thomas of Minnesota in 2012.

The Raiders then resumed the rivalry with Whitewater the following year with the younger Kehres as head coach, but Whitewater won those two meetings as well.

"You're certainly more prepared for the fact that you may play them based on the fact that you have played them so many times," Vince Kehres said. "As soon as you know it's a done deal that game plan is already kind of set. Then you're just tweaking as you get those tapes and you look at the most recent days."

Here are some other noteworthy matchups that happened in four straight postseasons from around the sports world:

SIBLING RIVALRY: While it doesn't quite count as postseason matchups, Venus and Serena Williams squared off for the title at four straight tennis majors starting with the 2002 French Open that Serena won in straight sets for her second career grand slam title. Serena followed that by beating her big sister in the final at Wimbledon, the U.S. Open and the 2003 Australian Open, winning the first of her two career Serena Slams. The sisters have met 30 times in all on the court, with Serena winning 18, including seven of nine meetings in slam finals.

GRIDIRON GREATS: Few rivalries were as heated as the one between the Pittsburgh Steelers and Oakland Raiders in the 1970s. The games were physical, memorable and often impacted the championship. It got so intense that Pittsburgh coach Chuck Noll referred to Raiders safety George Atkinson as part of the "criminal element" in football, leading to an unsuccessful defamation suit.

The teams played in five straight postseasons starting with the most memorable one in 1972 when Franco Harris' 60-yard TD on the Immaculate Reception led the Steelers to a 13-7 win. The Raiders got revenge the following year before Pittsburgh beat Oakland in two straight AFC title games on the way to Super Bowl wins. The run ended with Oakland winning 24-7 in the 1976 AFC championship on the way to the Raiders' first Super Bowl win.

KINGS OF THE COURT: There have been several NBA rivalries that featured four straight playoff meetings, including when Bill Russell's Celtics took three out of four Eastern Conference finals from Wilt Chamberlain and the 76ers from 1965-68.

The Knicks and Bulls squared off each year from 1991-94 with Michael Jordan and Chicago taking the first three and Patrick Ewing and New York winning the fourth when Jordan was playing baseball.

The Knicks went to the limit four straight times against Miami starting in 1997, with the Knicks winning three of the series that featured fights, suspensions and plenty of bad blood.

The Lakers and Spurs then traded dominance in the Western Conference with four straight meetings in 2001-04 between teams featuring Shaquille O'Neal and Kobe Bryant in Los Angeles and Tim Duncan in San Antonio.

QUEENS OF THE COURT: Connecticut and Notre Dame have been the dominant powers in women's college basketball this decade with the rivalry that began when both were in the Big East. The Irish won semifinal matchups in 2011 and '12 before Geno Auriemma and the Huskies got revenge with three straight wins from 2013-15. The last two came in the title game.

SOCCER POWERHOUSES: Spanish soccer rivals Real Madrid and Atletico Madrid squared off for four straight years in the knockout stage of the Champions League. Ronaldo and Real Madrid won each time, including the finals in 2014 and '16, the quarterfinals in 2015 and the semifinals in 2017.