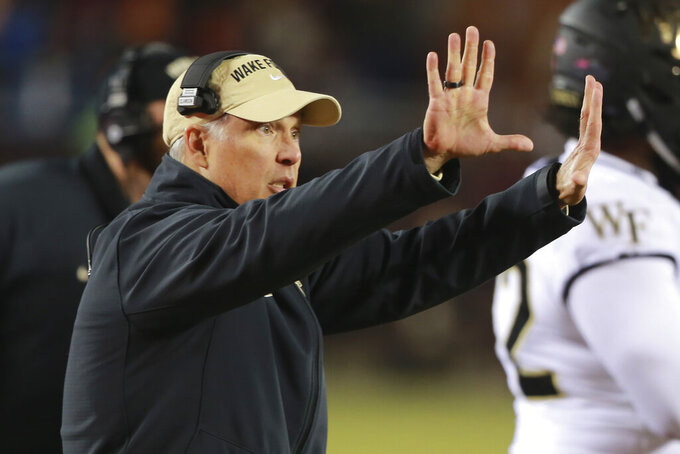 Clemson is looking to make the College Football Playoff for a fifth straight season — and that would vanish with a slip-up against Wake Forest. The Demon Deacons had hoped this game would be a showdown for the ACC Atlantic crown, but that fell away last week with their loss at Virginia Tech coupled with the Tigers’ takedown at North Carolina State.

Clemson: RB Travis Etienne. The defending ACC player of the year is making a bid for a second straight award. He leads all league runners with a nearly nine-yard a carry average and his 13 rushing TDs are tied for first in the league.

Clemson has won 10 straight in the series. In fact, Wake Forest’s last win in 2008 led to the ouster of former coach Tommy Bowden and elevation of Dabo Swinney as interim coach. ... Wake Forest will be without receiver Sage Surratt, the ACC leader with 111 yards a game, who is out for the year with an unspecified injury that the school said will require surgery. ... Along with its 25-game overall win streak, Clemson is seeking its 22nd straight victory at home to break the program record it tied two weeks ago when it beat Wofford at Memorial Stadium. ... Clemson plans to honor 19 seniors playing for a final time at Death Valley. The honorees include former Clemson offensive lineman Zach Giella, who was suspended last December for testing positive for banned substance ostarine. Giella lost an appeal of his yearlong suspension and left the team since was in his final season. ... Wake Forest’s senior class had had four winning seasons, the first time that’s happened in 71 years.