Clemson next for soon to be Lea-less Fighting Irish defense 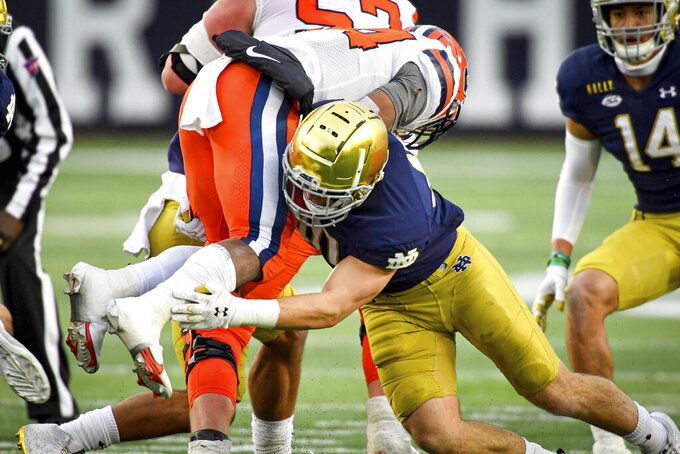 SOUTH BEND, Ind. (AP) — Clark Lea is on the way out at Notre Dame just as his defense has been on the way up.

The 38-year-old Lea, a Tennessee native, was named head coach at alma mater Vanderbilt on Monday. Before he focuses on rebuilding the Commodores, the second-ranked Fighting Irish (10-0) face Trevor Lawrence and No. 3 Clemson (9-1) in the ACC championship game.

“It’s not going to disrupt what he does in his preparation for the game and hopefully moving forward," Kelly said. "I’m not concerned (and) I know our players aren’t as well.”

It isn’t coincidence that Notre Dame’s four-year run of 43-6 has occurred since Lea joined Kelly’s staff as linebackers coach under defensive coordinator Mike Elko. When Elko left for Texas A&M following the 2017 season, Kelly elevated Lea and the Irish defense has improved.

In 2018, Lea’s defense with its 4-2-5 alignment was the cornerstone as Notre Dame won its first 12 games to gain a semifinal berth in the Cotton Bowl against Clemson. Lawrence and the Tigers burned the Irish for three second-quarter touchdowns and 327 passing yards total in a 30-3 victory before knocking off Alabama 44-16 for the national championship.

“They were a great team in ’18,” Clemson coach Dabo Swinney said. “This year, they can get pressure with that front. Their backers are really good, and they’ve got two of the best players (rover Jeremiah Owusu-Koramoah and safety Kyle Hamilton) that you’ll see in college football.”

When the teams last met on Nov. 7 in Notre Dame Stadium, Lawrence was sidelined by COVID-19 and his 6-foot-5 freshman replacement, D.J. Uiagalelei, threw for a Notre Dame opponent-record 439 yards.

Notre Dame did limit Clemson star running back Travis Etienne to 28 yards on 18 carries and recovered three fumbles, one returned for a touchdown by Owusu-Koramoah. The Irish got back-to-back sacks by ends Adetokunbo Ogundeji and Daelin Hayes and a fumble recovery by cornerback Nick McCloud in the second overtime to secure the 47-40 victory.

“We’ve got to play better,” Kelly said of the rematch. “There are some things we have to do much better in defending the passing game. We have to continue to keep their running game in check.”

Kelly is hoping for a performance like Notre Dame put up in the second half against North Carolina's prolific offense. Even after losing Hamilton to a first-half targeting penalty, the Irish held the Tar Heels to zero second-half points in a 31-17 victory.

In all, the defense surrendered 414 yards, including 229 on the ground, to North Carolina — so the yards have been there for the top offenses to take.

“Our guys have an immense amount of pride,” Kelly said. “It starts with Clark.”

Lea, whose calmness has impressed even Kelly, is expected to be in the coaching booth Saturday at Bank of America Stadium in Charlotte, North Carolina. Lea could stay in place if the Irish secure a CFP berth – the Rose Bowl and Sugar Bowl semifinals are Jan. 1 and the championship in suburban Miami is Jan. 11.

By John Zenor 1 minute ago
By Pete Iacobelli 2 hrs ago
3 hrs ago
By Ralph D. Russo 6 hrs ago
By Ken Powtak 20 hrs ago