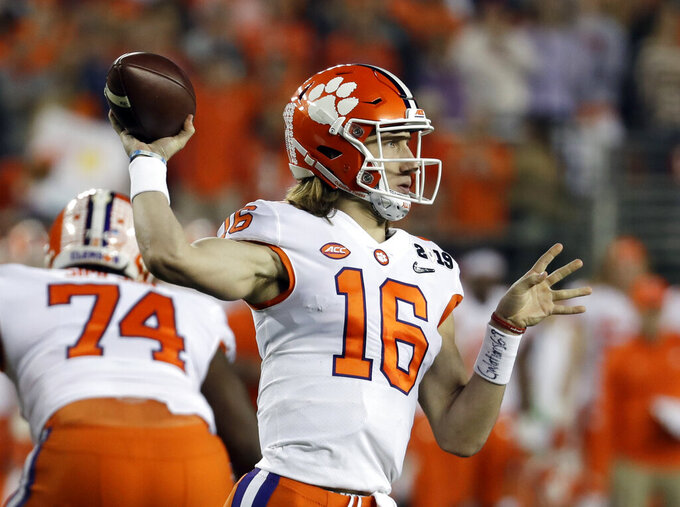 FILE - In this Jan. 7, 2019, file photo, Clemson's Trevor Lawrence throws during the first half the NCAA college football playoff championship game against Alabama, in Santa Clara, Calif. Sure, Clemson lost all four of its “Power Rangers” defensive line and seven starters on defense from its title team. But the Tigers’ offense, led by Heisman Trophy candidates quarterback Trevor Lawrence and tailback Travis Etienne, looks ready to operate at an even higher level than a year ago when it averaged 527 yards and 44.3 points a game. (AP Photo/Chris Carlson, File)

When asked recently what's left the Tigers, who have won two of the past three national titles, to accomplish, coach Dabo Swinney grinned slyly then said, "We haven't won two in a row yet."

The Tigers are poised to make a run at repeating.

Sure, Clemson lost all four of its "Power Rangers" defensive line and seven starters on defense from its title team. But the Tigers' offense, led by Heisman Trophy candidates quarterback Trevor Lawrence and tailback Travis Etienne, looks ready to operate at an even higher level than a year ago when it averaged 527 yards and 44.3 points a game. Clemson finished the season 15-0 and routed Alabama 44-16 in the title contest.

"You saw last year kind of us start flourishing, start clicking," said Lawrence, who took over as the starter in game five. "I think that's one thing, we're picking up kind of where we left off from last year."

That's a scary thought for anyone on Clemson's schedule.

The Tigers were picked in the preseason poll to win their fifth straight Atlantic Coast Conference crown. With that comes a probable berth in the Tigers' fifth College Football Playoff and a possible fifth consecutive matchup with Alabama. The Crimson Tide and Clemson have combined to win the past four national titles.

Swinney tries to temper early talk of a Clemson-Alabama title rematch, saying this group of Tigers have not won anything even though their prospects may be strong.

Co-offensive coordinator Jeff Scott hears regularly from Clemson backers who say they've already got flights and hotels for New Orleans, site of the next championship game.

Scott is gracious in thanking them, but likens it to buying an undeveloped plot of land and setting a date for dinner with friends in the house yet to be built.

"There are lots of steps to accomplish before we get to that," Scott said.

Some other things to watch with Clemson this season:

Quarterback Trevor Lawrence and tailback Travis Etienne are Heisman Trophy candidates this season. Lawrence, the sophomore passer, threw for 3,280 yards and 30 touchdowns despite splitting time for the Tigers' first four games. Etienne, the junior back, led the Football Bowl Subdivision with 24 touchdowns and set Clemson's single-season record with 1,658 yards. Lawrence said he and Etienne don't talk about the attention, or even to joke about it. "That's when things go wrong," Lawrence said.

Clemson will have several new players up front this season after defensive ends Clelin Ferrell and Austin Bryant and tackles Christian Wilkins and Dexter Lawrence were all drafted. Justin Foster and Xavier Thomas came out of spring as starting defensive ends while Jordan Williams and Nyles Pickney will fill the middle. Clemson will also start two new linebackers and a new cornerback in Derion Kendrick to take over for underclass draftee Trayvon Mullen.

Clemson held its national championship staff together for another offseason, not that it didn't cost the school. Clemson upped the salaries for co-offensive coordinators Tony Elliott and Jeff Scott to $1 million for this season while defensive coordinator Brent Venables makes $2.2 million a year. It all starts at the top as Swinney was awarded with a new deal worth $93 million over 10 years.

With defensive linemen Christian Wilkins and Dexter Lawrence off to the NFL as first-round draft picks, Clemson coach Dabo Swinney was asked if that meant the end to the team's "Jumbo" package in goal-line or short-yardage situations. Both Wilkins and Lawrence rushed for touchdowns last year, sending a stream of defenders knocking on Swinney's door for the chance to score. Swinney wasn't sure who, if anyone, would inherit those roles. "I've got to think about it," he said. "That's kind of been my baby."

Clemson counted on sophomore Braden Galloway to take over the tight end spot this season. But Galloway was among three players who tested positive for the banned substance, ostarine, right before the start of the College Football Playoffs. Galloway, the only one still on the Tigers, lost his appeal and will miss the next year, although he can practice with the team. Junior J.C. Chalk, the grandson of Swinney's mentor and former coach at Alabama Gene Stallings, goes into camp as the starter. Behind Chalk are freshmen Davis Allen and Jaelyn Lay, meaning it will be a position of concern entering the season.