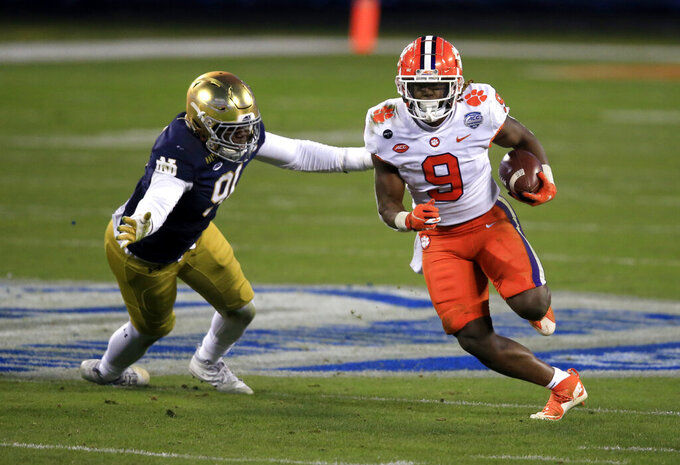 Clemson running back Travis Etienne (9) evades a tackle by Notre Dame defensive lineman Adetokunbo Ogundeji (91) as he runs for a touchdown during the first half of the Atlantic Coast Conference championship NCAA college football game, Saturday, Dec. 19, 2020, in Charlotte, N.C. (AP Photo/Brian Blanco)

CLEMSON, S.C. (AP) — While Travis Etienne's rushing total alone this season tells a disappointing story, the Clemson senior tailback believes there is a more positive tale that has made his decision to return to school for a final year well worth it.

Etienne finished last season as the two-time reigning Atlantic Coast Conference player of the year. He was — and is — a speedy, powerful runner who had totaled 4,038 yards and 56 touchdowns as he led the team in rushing in each of his three years.

He was NFL ready, but instead of heading to the pros, Etienne made another of his signature moves fans gasp at and returned to the Tigers for his senior season.

It all sounded good, but he's got 882 yards, little more than half his totals of the previous two years. But for Etienne, the numbers don't tell the story.

“Coming back, I feel like I accomplished everything I wanted to accomplish,” he said. “I've grown as a player in so many ways, you wouldn't understand.”

Clemson coach Dabo Swinney said Etienne's choice in the wake of the team's disheartening, 42-25 loss to LSU in last year's national title game was one of a mature player understanding his shortcomings and wanting to improve.

Etienne had gotten a second-round grade from the NFL's underclassmen advisory panel — good, just not good enough for Etienne.

He understood he needed to improve in pass protection and become more of a threat on the outside. Mission accomplished. He has a career high 44 catches for 524 yards, the most ever gained receiving by a back at Clemson. He's also led the Tigers with a 24.3-yard average on kickoff returns this season.

“I feel I've proven that I'm an all around back, first-, second- and third-down back that can be on the field at any time in the game,” he said. “I feel more complete than I was.”

That versatility was evident to others, too, as Etienne was named this week a first-team AP All-America at all-purpose player.

“He's so versatile with the way he can attack you," Werner said. “He can beat defenses whether they're running the ball or passing the ball, they're both threats.”

Etienne's change may have started in last year's CFP semifinal as the Buckeyes keyed in on stopping the run. Etienne had only 36 yards rushing, but he led the Tigers with 98 yards and two touchdowns receiving in a 29-23 win at the Fiesta Bowl last season.

Elliott acknowledged defenses are loading up front to stop Clemson's run and the Tigers' offensive line, with four first-time starters, has not always been as stout as in Etienne's earlier seasons.

At times, “we can't get going before there is that contact on Travis,” Elliott said. "So it’s just a combination of things.”

It's hard to knock Etienne's milestones. The 5-foot-10, 205-pound senior from Jennings, Louisiana, was a late add to Clemson's 2017 recruiting class when another tailback prospect went elsewhere. He quickly rose as the Tigers' featured back and has become the Atlantic Coast Conference's all-time leading rusher, surpassing a mark held by North Carolina State's Ted Brown since 1978.

Etienne is also the league's career leader in rushing touchdowns and total TDs.

He is very satisfied with how his season has gone. Etienne came back, he said, to graduate (he got his degree in sports communication in December) and to set the right example for his younger brother, Trevor, a junior at Jennings High in Louisiana.

“Knowing that he's going to go through this process, I just want to know I was the best role model for him,” Travis Etienne said.

Etienne hopes to finish the season with another national title before starting his pro career.

“Me coming back was the best thing for me,” he said. “And I made the most out of it.”