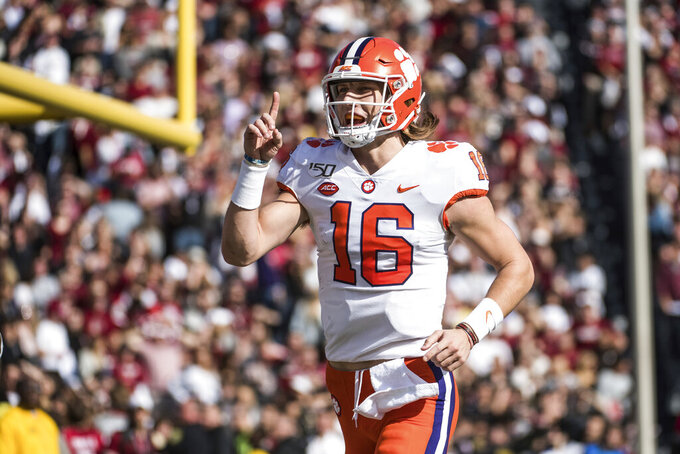 Clemson quarterback Trevor Lawrence (16) celebrates the a touchdown against South Carolina during the first half of an NCAA college football game Saturday, Nov. 30, 2019, in Columbia, S.C. (AP Photo/Sean Rayford)

And Perkins isn’t the only Cavalier with big-play potential the third-ranked Tigers (12-0; No. 3 College Football Playoff) will need to contain when they take on Virginia (9-3) in Charlotte, North Carolina, on Saturday night.

Virginia receivers Joe Reed and Hasise Dubois have a combined for 1,476 yards and nine touchdowns.

Perkins leads the league in total offense with 303 yards a game. He’s had a hand in 27 of Virginia’s 50 touchdowns this season (16 passing, 11 rushing) and is at his best, Clemson defensive coordinator Brent Venables said, when things break down and the Cavaliers need a play.

“I just look at him as a great player on his own. He’s the heart and soul” of Virginia, Venables said. “He’s just difficult to defend.”

Perkins made second team all-ACC while Reed, the league leader in kick returns, was picked as a first-team all-purpose player.

Clemson had 16 players named to All-ACC teams on Tuesday.

One of them at the top of the list is Perkins’ counterpart, Clemson’s Trevor Lawrence, who has thrown 30 touchdowns, 10 of them for 30 yards or more. Another is Tigers tailback Travis Etienne, who leads the ACC with 16 rushing touchdowns and set the league career mark for running TDs with 53.

On the outside, the Tigers are power-packed, too, with receivers Tee Higgins and Justyn Ross combining for 1,548 yards and 17 touchdowns.

Lawrence, Etienne and Higgins are all part of the all-ACC first-team offense.

Virginia coach Bronco Mendenhall knows the challenge his team is up against.

He said Clemson’s offense is matchup nightmare because of all the ways they can advance the football. The bevy is standout skill players makes it near impossible to take away one aspect and expect to shut the Tigers down.

“When you allocate resources, and at any point if you allocate an additional resource to any one of those spots, there’s an instant trade-off that you’re making somewhere else,” explained Mendenhall.

Lawrence and Clemson’s offense have averaged 541 yards and 45 points this season, topping the ACC by far in both categories. While the Tigers have the postseason experience edge on Virginia — Clemson is seeking to become the first school to win five straight league title games — Lawrence said it’s essential to keep level-headed this week.

“I think just not making the moment too big. That's something that's easy to do,” he said.

Clemson’s been able to easily navigate any bumps during games this year — they’ve won 27 straight games.

Swinney believes that in the chase to find flaws, a sublime season by his Tigers has been somewhat overlooked. He said his offense and defense are playing at higher levels than at this point in Clemson’s 15-0 national championship season a year ago.

“Will they finish?” Swinney asked. “I don’t know.”

Virginia hopes to have a big say in that answer.