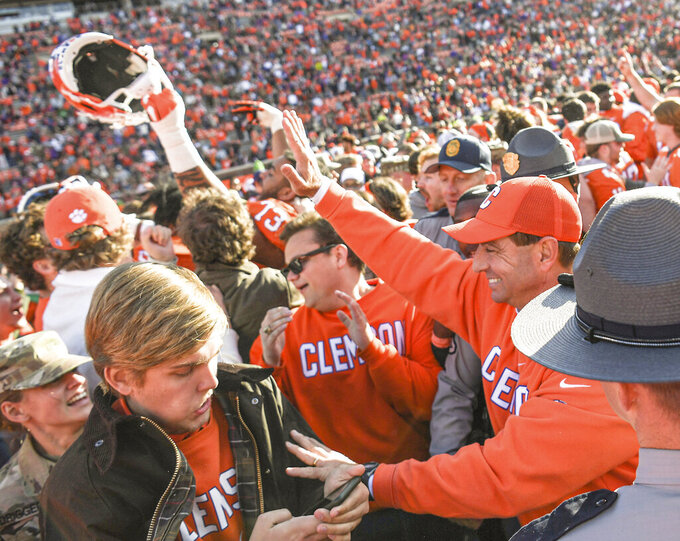 CLEMSON, S.C. (AP) — Clemson did what it had to do for a chance to extend its run of ACC Atlantic Division titles.

Now, it's out of the Tigers hands. They have to wait for this weekend's results to see what's next for them.

Clemson (8-3, 6-2 Atlantic Coast Conference) closed out league play with its most dominant performance of season Saturday with a 48-27 win over No. 21 Wake Forest. A loss would've ended the Tigers chances at a seventh straight appearance in the ACC championship game.

With that win against the Demon Deacons, if Wake Forest and No. 24 North Carolina State lose this weekend, Clemson would be playing for the league title — again.

Clemson tailback Will Shipley said players are aware of the situation, but focused on winning their seventh straight game in the Tigers' regular-season finale at South Carolina (6-5) on Saturday night.

“Obviously, we want to make the ACC championship,” he said. “But another one of our goals is to win the state championship.”

The Tigers are rolling at the moment, shaking off a 2-2 September with wins in six of their last seven games. They had their most complete performance in the dismantling Wake Forest, which was previously unbeaten in the conference.

Clemson coach Dabo Swinney pleased his players found a way to remain a factor despite the early issues.

“For us to have any hopes at all we had to win the game to stay alive,” Swinney said of the victory against Wake. “We definitely didn't want anybody to come in here to the Valley and get a trophy.”

“We know they’re immensely talented and it looks like they’re playing their best football here in November,” Beamer said. "It looks like they’ve continued to improve as the year’s gone on.”

Maybe enough to play for a championship, depending how the Wolfpack fare against rival North Carolina on Friday and the Demon Deacons' result at Boston College on Saturday.

“We'll be checking those scores all throughout the day,” said Collins, a freshman who had a left-armed, one-handed catch for a 58-yard touchdown in the Wake win. “

Clemson has usually had the division race wrapped up by its rivalry game. Losses to North Carolina State in September and Pitt in October set them back in the standings as Wake and the Wolfpack took control.

Elliott believes the focus players showed since mid-season to stay in the mix will serve them well during a busy, Thanksgiving Week of preparation.

After the loss to Pitt, Elliott said the players on offense realized how close they were to playing like Clemson's recent title-winning teams.

That was in full effect last week against Wake Forest. Quarterback D.J. Uiagalelei threw for 208 yards and a touchdown, tailback Kobe Pace ran for 191 yards and two scores, Shipley had 112 yards and two touchdowns and also passed for a 2-yard score off a direct snap.

Still, there's little the Tigers can do this week to improve their chances in the title chase — except cross their fingers and hope.

“We're depending on a little bit of help right now ,” Collins said.