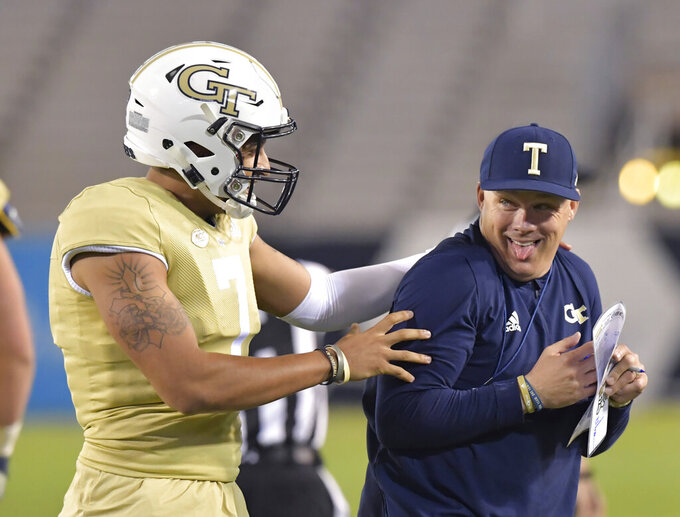 FILE - In this April 26, 2019, file photo, Georgia Tech head coach Geoff Collins, right, reacts as quarterback Lucas Johnson (7) holds him during the team's NCAA college spring football game in Atlanta. Collins is only a few days away from the first big test for his new team, a visit to No. 1 Clemson, the defending national champion Thursday, Aug. 29, 2019. (Hyosub Shin/Atlanta Journal-Constitution via AP, File)

Lawrence appears cool, calm and more confident than he was last season when he helped the Tigers win their second national championship in three years .

Clemson's journey to repeat starts Thursday night when the top-ranked Tigers open the season hosting Atlantic Coast Conference opponent Georgia Tech. Lawrence, the 6-foot-6 sophomore, led the Tigers (15-0 last season) to the national title after becoming the starter and he capped off the season with a stunning performance in a 44-16 win over Alabama in the championship game.

"I'm still the same person," Lawrence said. "The only thing that comes from success is having a little bit more confidence."

Lawrence believes it comes from knowing he's the starter instead of fighting for the job as he had to last year when he came into school as a highly promising freshman.

Lawrence continued to work as he competed against returning starter Kelly Bryant for the job. But after four games, Clemson coach Dabo Swinney anointed Lawrence his starter. The popular Bryant transferred — he'll start for Missouri on Saturday — and Clemson rolled to the title.

The offense averaged better than 45 points a game the rest of season. Lawrence threw for 3,280 yards and 30 touchdowns, including three against the Crimson Tide.

Now, Lawrence believes the Tigers can pick up where they left off.

"We have so many great playmakers, it's nice to be the quarterback and have options," Lawrence said.

He also said he's improved his mechanics, including his footwork and ability to read defenses. Lawrence is more willing to challenge teammates to dig in and focus during tough times.

"We want to be the best offense in the country," he said. "That's one of our goals and I think we have the talent to do that."

The Tigers figure to get things going quickly against the Yellow Jackets (7-6 last season) , who have changed defensive schemes under new coach Geoff Collins .

"He's unbelievable at making all the variety of throws. He's not known as a runner but very good at just pocket presence and just escaping," Thacker said. "I can't compliment him enough."

Some other things to watch when Georgia Tech plays Clemson:

Fans might have to check their rosters when trying to identify Clemson's new defensive front. All four of last year's starters were picked in the NFL draft, end Clelin Ferrell and tackles Christian Wilkins and Dexter Lawrence in the first round. It's unclear will start Thursday night. Only senior tackle Nyles Pinckney has locked down a starting spot. The other three spots were listed has players listed as either/or on Clemson's depth chart.

Georgia Tech will select a player each week to wear the No. 90 that belonged to defensive tackle Brandon Adams, who died before spring practice. Collins announced defensive tackle Chris Martin, who usually wears No. 96, will be the first to wear Adams' number. Adams, who was 21, died while practicing a dance routine.

"Just teaching the young guys, the freshmen, that didn't get to know Brandon just what he meant to this program, how he was such an unbelievable teammate, an unbelievable member of our Georgia Tech athletic association," Collins said.

The celebration of last year's national champions will conclude Thursday night when Clemson unveils new banners and signs around Death Valley to let the crowd of more than 80,000 cheer the 2018 title one final time.

Lucas Johnson, who has never thrown a pass in a game, is thought to be the favorite to start at quarterback. Collins isn't announcing starters, and says he won't release depth charts. Instead, Georgia Tech released Collins' list of players, in numerical order by position, who are "above the line."

The quarterbacks on the list were Johnson, Tobias Oliver and James Graham. Oliver ran for 876 yards and 12 touchdowns in 2018.

It's the first football game on the newly launched ACC Network. Count Clemson coach Dabo Swinney a fan. "So what does it do? I mean, heck, it's got people sitting around talking about the ACC all day every day," he said. "It gives us a channel."