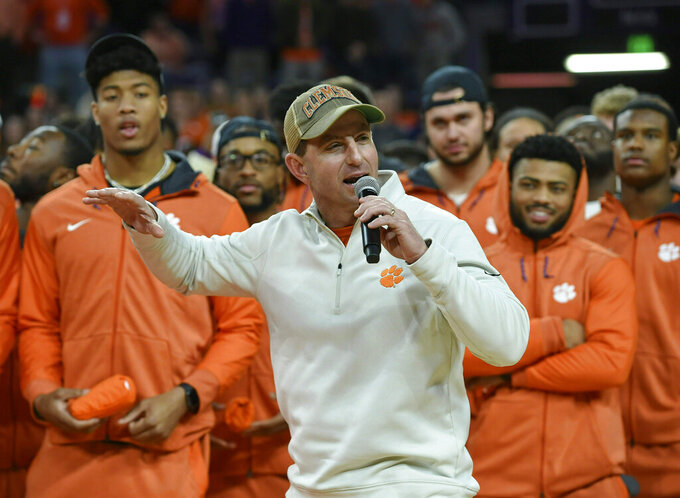 FILE - In this Saturday, Jan. 12, 2019 file photo, Clemson head football coach Dabo Swinney along with members of the 2019 National Championship football team address the crowd during the first half of an NCAA college basketball game between Clemson and Virginia in Clemson, S.C. Clemson just keeps on winning on the football field, and in recruiting. Less than a month after the Tigers won their second national championship in three years, they polished off the best class in the Atlantic Coast Conference on Wednesday, Feb. 6, 2019, the first day of the traditional signing period .(AP Photo/Richard Shiro, File)

They received raises that increased their yearly salary to $1 million, giving the national champion Tigers three assistants making at least that much. The school's board of trustees approved salary increases for several Clemson assistants and staffers Friday.

The move comes a month after Clemson completed a 15-0 season by beating Alabama 44-16 in the national championship game. Elliott and Scott each made $850,000 last season and received raises of $150,000.

Venables was the only member of the staff not to get a salary increase since his deal was redone last summer.

Clemson will pay its assistants a total of $7.1 million, for now the highest total in the country. That total is up from $6.5 million last year.

Clemson athletic director Dan Radakovich said it was important to head coach Dabo Swinney to reward his assistants. "There's been very little turnover and I think that helps with the culture and the environment inside the program and has helped create the outstanding results that we've had," Radakovich said.

Each assistant also had a year added to their contracts.

Radakovich said he's reworking Swinney's contract. Swinney, who'll start his 11th full season with the Tigers, made $6.5 million in salary last season with another $1 million or so in bonuses for Clemson's perfect season. Swinney is also in line for a $1 million retention payment from Clemson if he's the coach on March 1.

Offensive line coach Robbie Caldwell received a salary increase of $30,000, upping his compensation to $570,000 for next season.

Quarterback coach Brandon Streeter, instrumental in the development of Clemson freshman passer Trevor Lawrence, will be paid $500,000 after getting a raise of $45,000.

Among off-the-field staffers, longtime strength and conditioning coach Joey Batson got a raise of $100,000, increasing his salary to $600,000 next season.