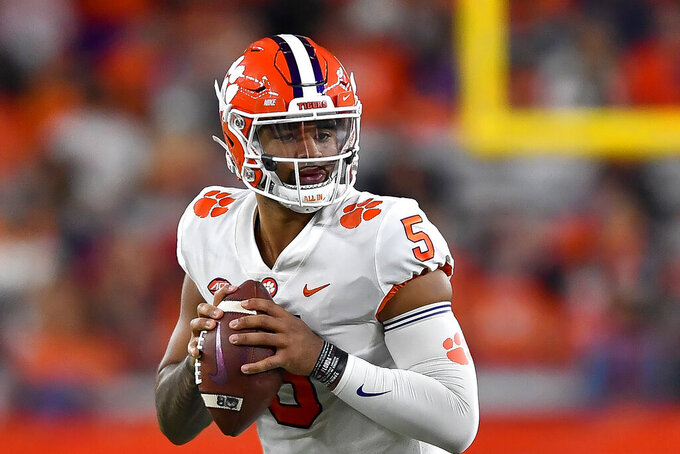 FILE - Clemson quarterback DJ Uiagalelei looks to pass during the first half of an NCAA college football game against Syracuse in Syracuse, N.Y., Friday, Oct. 15, 2021. Clemson coach Dabo Swinney won't let all the questions about changes on the Tigers ruin his excitement to get back on the field. (AP Photo/Adrian Kraus, File)

CLEMSON, S.C. (AP) — Clemson coach Dabo Swinney won't let all the questions about changes on the Tigers ruin his excitement to get back on the field.

“This team has a great vibe to it already,” Swinney said as Clemson continued spring drills Friday.

The perpetually positive Swinney probably has more need for it these days with his team breaking in four new assistants including first-time Clemson coordinators on defense in Wes Goodwin and offense in Brandon Streeter.

Former Clemson standout Nick Eason, a first-team all-Atlantic Coast Conference pick at defensive tackle in 2002, was hired to coach that position after Todd Bates joined Venables' staff with the Sooners.

Kyle Richardson was named to coach tight ends, something Elliott did before heading to Virginia.

“We've had a great, uncommon stability here so our world was shaken with Coach V and some of those guys leaving,” Clemson defensive end K.J. Henry said.

Swinney acknowledged the changes led to a few extra sessions of “coaching the coaches” to get prepped for spring ball. The Tigers will conclude workouts with their annual Orange and White game on April 9.

All certainly seemed good as Clemson went through its second practice Friday.

Henry said it has been fun watching Goodwin step into a leadership role on a defensive group that will have questions after losing five starters among its linebackers and secondary who opened in a 20-13 win over Iowa State in the Cheez-it Bowl last December.

Goodwin is not the loud, crazed wild-man Venables showed on the sideline at times the past 10 years. But Goodwin is a smart coach who can diagnose mistakes and put players in good positions to perform at their peak, Henry said.

Offensive lineman Jordan McFadden said Austin, who was part of Clemson's staff as an offensive analyst last season, has gained the trust of his players at a position where starters Hunter Rayburn had to give up football due to a neck injury and center Mason Trotter will be out most of the year with an undisclosed issue.

All Swinney would say is what Trotter is dealing with is “not a legal issue or a university issue."

Streeter's biggest concern on offense is getting starting quarterback DJ Uiagalelei playing like he was expected to at the start of last season. Uiagalelei has shed about 15 pounds, Swinney said, and has healed from a sprained right knee ligament sustained last November and a tendon injury on the index finger of his throwing hand.

Swinney thought Uiagalelei improved as the season went on and the Tigers, after starting 2-2, won eight of nine games for their 11th straight season of 10 wins or more.

Uiagalelei entered last season a trendy pick for the Heisman Trophy, a push that faded as he struggled early and the Tigers faded from the ACC and College Football Playoff race.

Swinney said national championship quarterbacks Deshaun Watson and Trevor Lawrence made their share of errors, bad reads and poor throws, too. “DJ's mistakes were magnified,” Swinney said. “We weren't near as good around him as we were around those other two dudes.”

Uiagalelei said he's improved his technique and his diet to help the Tigers reach their championship goals. He called last season one of the most challenging of his career. “But it's a blessing in disguise,” he said.

Despite its strong finish, McFadden said players were disappointed at ending a six-year run of ACC titles and CFP appearances. He believes the team is ready to start a new streak this season.

“We want to give ourselves a chance to win those big games,” he said. “Since we didn't last year, it was a different feeling, a feeling I didn't like.”