Clemson's Swinney knows the job is to win big over UConn 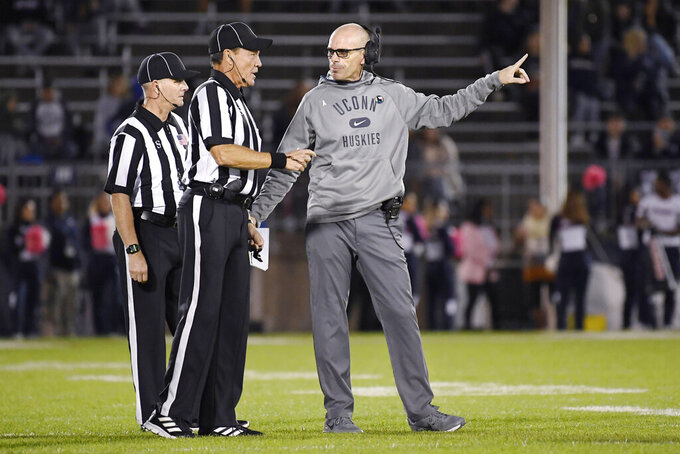 He understands that any FBS team, including the Tigers' opponent this week UConn (1-8), is capable of pulling off a surprise upset. Still, Swinney knows the job for his Tigers (6-3) is to win big against an overmatched opponent.

Swinney was asked if he might rest banged up quarterback D.J. Uiagalelei given Clemson is favored by 40 1-2 points, according to FanDuel Sportsbook.

“If we lose this game,” Swinney said, “there will be a new head coach here.”

That's not likely given that Uiagalelei and the offense have taken steps forward in their past two games after struggling to find a rhythm much of the season. They had back to back games with 30 points apiece, the most they've scored against FBS opponents this fall.

And Uiagalelei has directed two fourth-quarter, winning touchdown drives after Florida State and then Louisville had taken late leads. That's something, Swinney noted, the Tigers hadn't done in the coach's 13 full seasons.

The quarterback sprained a knee ligament in the win at Louisvill e, yet stayed in despite a visible limp and scored the go-ahead touchdown on an 8-yard run where Swinney said he “hobbled in” — a play that's become known as the “quarterback hobble.”

Swinney said Uiagalelei doesn't need surgery on the injured posterior cruciate ligament. Uiagalelei came back out with a brace on his right knee, something that's likely to stay on for his time against the Huskies.

UConn interim coach Lou Spanos was disappointed with the loss to Middle Tennessee, but saw positive signs of a team wanting to improve in spite of its struggles.

“Even though we lost, the energy was there,” he said. “We were saying, ‘Mmm, we let that one go. I’ve got to get better.' When I say ‘I,' I mean all of us and that's why I take great pride in our team and what we're trying to accomplish.”

Some other things to watch when UConn plays at Clemson:

UConn hired former UCLA coach Jim Mora as its next head coach. The school had searched for a coach since Randy Edsall stepped down in September. Mora will be designated an assistant coach through the final regular season game against Houston on Nov. 27. Mora will take over the next day.

This marks the first meeting between Clemson and UConn, which has been an FBS team since moving up from the old Division I-AA in 2000. The teams do not have another game currently scheduled. UConn will get $1.2 million from Clemson for the game.

The game will be a reunion between Clemson backup quarterback Taisun Phommachanh and his younger brother, Tyler, a freshman passer for UConn. Tyler injured his knee in the Huskies loss to Vanderbilt last month, but is still traveling with the team South. Clemson's Taisun saw action last week against Louisville and figures to play more this week should the Tigers get up early on UConn.

UConn comes into Clemson not having played a game since Oct. 22. The Huskies opened the season a week earlier than most, falling to Fresno State 45-0 on Aug. 28 to start a run of nine consecutive games without a break. Interim coach Lou Spanos acknowledged the challenge in balancing rest and work over the 22-day span without playing. “Two weeks consecutive, that's a first,” he said.

Clemson has had difficulty finding an effective slot receiver this season. Tigers offensive coordinator Tony Elliott thinks they may have found their next great one in freshman Beaux Collins. Clemson's offense has featured several reliable inside receivers like Artavis Scott, Hunter Renfrow and Amari Rodgers through its decade-long run of success. Collins, a 6-foot-3, 205-pound wideout from Los Angeles, has a knowledge of the position that makes him an asset, Elliott said.