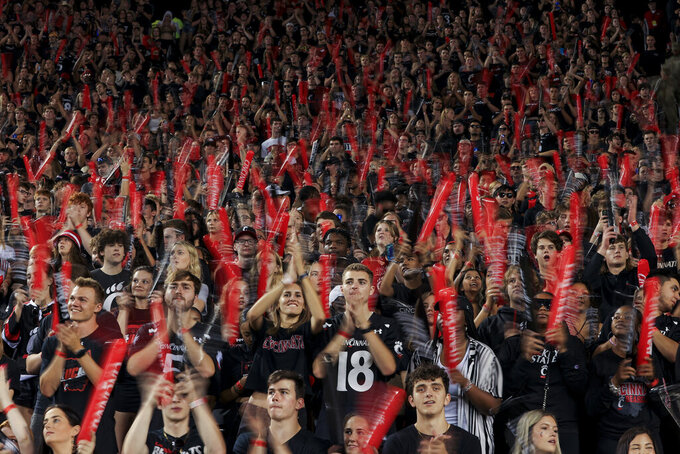 The Cincinnati student section reacts during the first half of an NCAA college football game against Temple, Friday, Oct. 8, 2021, in Cincinnati. (AP Photo/Aaron Doster)

CINCINNATI (AP) — The bubble that covers Cincinnati's practice field to create an “indoor facility” when the temperatures begin to drop in the Midwest is patched with duct tape and casts a musty scent over the proceedings.

The space isn't big enough to accommodate the whole team, so groups of players periodically file in and out through revolving doors to work on the adjacent outdoor field on this cool, sunny day.

The Bearcats embrace the grit and low-frills aspects of their program. “Clifton Style,” they call it, a shoutout to the trendy if rough-around-the-edges neighborhood that abuts their urban campus.

“Yeah, it’s not the prettiest place and it’s not for everybody,” linebacker Joel Dublanko said. “Cincinnati is a blue-collar city and so that’s what we pride ourselves on. And that’s what we try to put on film every Saturday.”

The Bearcats do not have all the creature comforts typically found at college football powerhouses such as Alabama, Ohio State and Oklahoma. Maybe those will come when the program joins the Big 12, but it is not holding them back.

Heading into the second half of the season, No. 2 Cincinnati (7-0) is ranked ahead of all three of those blue bloods and aiming to break college football's glass ceiling.

The Bearcats head into Saturday's game against American Athletic Conference rival Tulane positioned to be the first team from outside the Power Five conferences to have a realistic shot to make the College Football Playoff. The first CFP rankings come out Tuesday night.

The Luke Fickell era at Cincinnati began Jan. 8, 2017, with a team meeting where the new coach talked about blind faith.

The Ohio native and former Ohio State player and assistant coach under both Jim Tressel and Urban Meyer had replaced Tommy Tuberville, whose laidback style and propensity for recruiting outside the state had allowed a consistently winning program to slip.

“We inherited a group of guys that was under a completely different leadership style, in my mind," Fickell told AP. "So as we walked in, I said this is the way we’re going to be and you guys got to have blind faith that what we’re doing is best for you and our program, and is going to give you an opportunity to grow as a man — to be successful on and off the football field.”

The next day, the Bearcats started a week of Attention Training. The exhausting, bone-chilling, predawn outdoor workouts certainly got their attention.

“I remember I was doing pushups in the snow and, like, there’s like little blood spots in the snow because my hands were bleeding,” said Dublanko, one of Cincinnati's three sixth-year seniors.

On top of the foundation of toughness and togetherness laid down that winter, the 48-year-old Fickell has built a powerhouse (38-6 over the last four seasons) with players who have been undervalued or overlooked.

"We’re an offensive line-driven program because we want guys to care about the team. Want guys to be humble in what they do and we want guys who don't really care who gets the credit," Fickell said.

And he wants the Bearcats to be mostly built in Ohio.

The roster for Tuberville’s last team showed 38 players who went to high school in Ohio. The current Bearcats have 75 players from Ohio high schools, including 27 who list Cincinnati as their hometown.

If there is a high school football player in the Buckeye State who can help the Bearcats, Fickell and his staff have the connections to find him.

The perfect example came in his first recruiting class.

Fickell coached Bryant's brother, Christian, with the Buckeyes and knew Coby had not just the size and athleticism to develop into a productive defensive back, but also the maturity and work ethic to become a tone-setter for the program.

“I didn’t want to have anything easy. I wanted everything to be earned,” Bryant said.

Ask Bryant what NFL players he admires he mentions two Glenville alumni: New Orleans Saints star cornerback and former Buckeye Marshon Lattimore, who was a first-round draft choice, and Justin Hardee, an undrafted free agent out of Illinois who has carved out an NFL career as a special teams demon.

Bryant is among Cincinnati's super seniors who took advantage of the NCAA's eligibility give back for competing during the pandemic-altered 2020 season to return for a fifth year.

The group also includes star quarterback Desmond Ridder, a former three-star recruit from Louisville, Kentucky, who was committed to previous staff, and linebacker Darrian Beavers, who went to UConn and transferred back home to play for Fickell.

In subsequent recruiting classes, Cincinnati has swiped high-upside recruits such as Myjai Sanders from Power Five programs. Sanders was a long but light defensive end from Florida who is up to 255 pounds since signing in 2018 and still chasing down running backs.

Then there is Gardner, nicknamed Sauce and the Bearcats' best player. The long-armed lockdown corner from Detroit picked Cincinnati over Indiana, Kentucky and other P5s in 2019 and has developed into a potential first-round pick.

“Coach Fick told me from the jump we got something big that's going to be coming here in the next couple years,” Gardner said. “He didn’t lie about it.”

The Bearcats are most definitely doing big things, Clifton Style.

“It's the brand. It's the identity of the football team," Brooks said. “It's a tough, gritty school.”