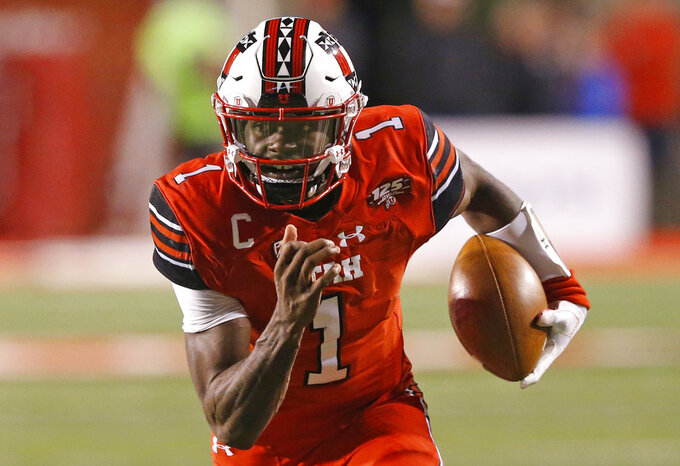 SALT LAKE CITY (AP) — Those final seconds on the game clock have really come to mean something in Southern California's series with Utah.

Three of the last four games between the two have been decided by plays in the final minute.

"When you look at basically three of the last four games, they've gone down to the last drive," USC coach Clay Helton said. "It's one of those games that you know is going to be a 60-minute game."

The next chance for a nail-biter comes Saturday in Salt Lake City.

The Trojans came out on the positive end of those dramatic finishes a year ago, edging Utah 28-27 when they stopped Troy Williams on a 2-point conversion run after he scored on a 1-yard run with 42 seconds left. They weren't so lucky in their last two trips to Rice-Eccles Stadium, falling in 2014 and 2016 after the Utes scored game-winning touchdowns in the final seconds.

"It's a very hostile atmosphere," Trojans running back Aca'Cedric Ware said. "Their fans are crazy. It's loud, but it's also exciting. I can't wait to play there again. Last time didn't go so well, so hopefully we can make a change this time."

Both teams have bounced back from rough starts and are finally playing with the swagger of teams that were picked before the season to finish at the top of the Pac-12 South.

USC has won three straight — highlighted by a 31-20 victory over previously unbeaten Colorado — after enduring lopsided losses against Stanford and Texas. During the winning streak, the Trojans have averaged 6.02 yards per play.

Freshman quarterback JT Daniels settling into the offense is driving the consistent production. Daniels has totaled 721 yards and six touchdown passes over his last three games.

Containing Daniels will be a challenge even for Utah's stout defense, but it's one the Utes feel prepared to handle.

"We're No. 1 in the conference in pass efficiency defense, which is our barometer of how we are doing versus the pass, and we're among the leaders nationally," Utah coach Kyle Whittingham said. "We've given up some yards in certain weeks, but you judge it by the efficiency of it all and I think we are doing a good job."

Utah has averaged 41 points and 458 yards per game in back-to-back wins over Stanford and Arizona. This uptick in production came after the Utes totaled just 48 total points in the preceding three games.

Whittingham pointed to improved offensive line play, fewer drops by receivers and junior RB Zack Moss returning to full strength as factors behind the offensive surge. A changed mentality among the players has also helped.

"We've been in these shoes before and we've come up short in the past," Utes LB Cody Barton said. "We have that taste in our mouth of losing, that two-game losing streak we had. That's something we don't want to feel again."

Other things to note when Utah hosts USC:

GUSTIN OUT: Senior linebacker Porter Gustin will miss the remainder of the season after fracturing his ankle against Colorado. It is a huge blow to the USC defense. Gustin led the Pac-12 with seven sacks and ranked fourth in the league with 10 tackles for loss. He ranked in the top 20 nationally in both categories.

RUNNING WILD: Utah is dominating the run game on both sides of the ball this season. Through six games, the Utes have totaled 1,115 rushing yards while limiting their opponents to 449 yards. They are averaging 4.6 yards per carry while allowing only 2.6 yards per carry.

INTERCEPTION MAGNET: Cameron Smith has four interceptions in 3 ½ seasons with USC. All four of those picks have come against Utah. Smith had three interceptions — returning one for a touchdown — in a 42-24 win over then-No. 3 Utah in 2015. His fourth interception came in last season's 28-27 win over the Utes.

TRIPLE THREAT: Tyler Huntley is the only Pac-12 quarterback this season to throw for a touchdown, run for a touchdown, and catch a touchdown pass in the same game. Huntley achieved the feat in Utah's 42-10 win over Arizona. He threw two TD passes, ran for another, and scored on a 58-yard pass from sophomore WR Britain Covey.