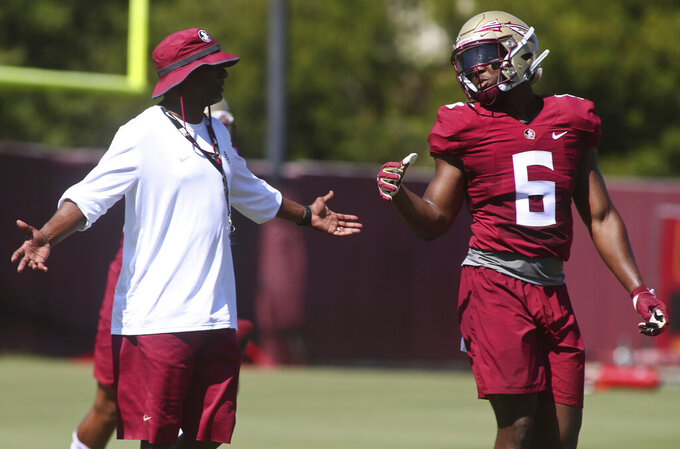 TALLAHASSEE, Fla. (AP) — Coach Willie Taggart arrived at Florida State and ramped up expectations with the promise of "Lethal Simplicity."

But the Seminoles' offense was anything but fun to watch in 2018, averaging just 22 points per game.

Taggart knew after a 5-7 season that he would have to make significant changes. He brought in Kendal Briles to run the offense, while Briles' close friend, Randy Clements will coach the offensive line. Former Florida State receiver Ron Dugans, who won a national title in 1999, is back two decades later to coach his old position group.

Florida State looks to make a big improvement after missing out on a bowl game for the first time since 1981 and suffering its first losing season since 1976, which was Bobby Bowden's first year as the Seminoles' coach.

While Taggart was evaluating everything about his first season in Tallahassee and preparing for year 2, he also took a long look at his plate and decided to give up play-calling responsibilities to Briles.

"I think last year my ego was telling me, 'No, don't give it up, coach.' But my instincts were telling me that I should," Taggart said. "And it was the first time that I was going against my instincts because of my ego. I pushed my ego out of the way for the betterment of the team and I think it's going to pay off big time for us."

He believes the Seminoles are primed for a similar jump in 2019. One of the reasons are the playmakers on offense, which includes tailbacks Cam Akers (a 1,000-yard rusher in 2017) and Khalan Laborn as well as receivers Tamorrion Terry (eight TD receptions last fall), D.J. Matthews and Keyshawn Helton. Tight end Tre' McKitty is also a quality blocker and legitimate downfield threat.

"It may be one of the best skill groups that I've ever been around - talking about running backs, tight ends, receivers," Briles said. "So it's on us to put them in a good position to make plays. . All gas, no brakes."

Here are some things to watch at Florida State this season:

Florida State will go into the season with three scholarship quarterbacks available: redshirt sophomore James Blackman and Wisconsin graduate transfer Alex Hornibrook and Jordan Travis, who transferred from Louisville in January. Blackman, who has 12 college starts under his belt, is the front-runner but is being pushed by Hornibrook. Travis has received his waiver and can play in 2019. A walk-on quarterback, Western Michigan transfer Wyatt Rector, arrived in May and has not received his waiver to play this fall.

Florida State's offensive line allowed 36 sacks, tied for 109th in the FBS. The Seminoles' line has been a problem area for five years and new position coach Randy Clements looks to rebuild the group. Graduate transfer Ryan Roberts, a two-year starter at Northern Illinois, has been working at right tackle in preseason camp. One lineman to watch is early enrollee Dontae Lucas, a guard who Taggart has said is the most powerful lineman on the roster.

The Seminoles experimented with 3-4 defensive fronts in the spring and have used that alignment throughout preseason practices. Florida State lost its elite pass rusher — junior defensive end Brian Burns was a first-round pick by Carolina. But the 3-4 allows the Seminoles to utilize some of their strengths, putting three massive defensive tackles up front while also having defensive ends or outside linebackers act as stand-up rushers. One concern is a knee injury to defensive tackle Marvin Wilson, which has limited the practice time for a player that is one of the top interior linemen in the ACC.