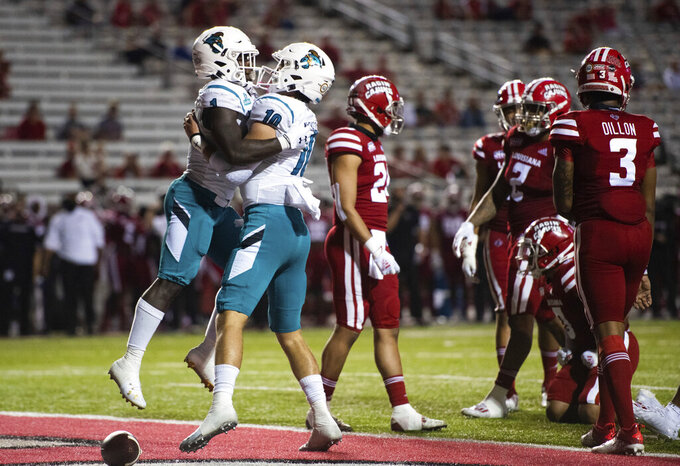 Coastal Carolina running back CJ Marable (1) and quarterback Grayson McCall (10) celebrate after Marable scored a touchdown during the first half of an NCAA football game against Louisiana-Lafayette in Lafayette, La., Wednesday, Oct. 14, 2020. (AP Photo/Paul Kieu)

The attention keeps rolling in for No. 20 Coastal Carolina.

Two weeks of being ranked in the Top 25 for the first time has given coach Jamey Chadwell a new appreciation for how little attention he usually gives to media coverage.

When Coastal Carolina was toiling at or near the bottom of the Sun Belt Conference in each of the last three years, the Chanticleers (5-0, 3-0 Sun Belt) never had ESPN’s Game Day come to campus to film a segment. But a Game Day crew was on site this week, and Chadwell has tried to strike a balance between meeting the demand of national outlets and keeping his players focused Saturday’s game at Georgia State (2-2, 1-2).

“I try to remind them that we’re at this point because of the things we’ve done,” Chadwell said. “And if you want to go back to who we were, start believing the hype, start patting yourselves on the back. They’re kids, and social media is the thing to do, but we’ve had good leaders. It hasn’t been an issue yet, and I don’t anticipate that it will be.”

The status of Coastal Carolina quarterback Grayson McCall is uncertain heading into Saturday. Chadwell said McCall first got banged up in the win at Louisiana-Lafayette two weeks ago and wasn’t able to fully participate in practice the following week. He still hasn’t returned as a full participant because of an upper body injury.

If McCall can’t play, Fred Payton will start for the second straight week. Coastal Carolina is coming off a 28-14 victory over Georgia Southern.

Strachan tore his ACL in the season-opening win at Tennessee last year, but he stayed true to his rehab regimen and returned in better shape than before the injury. Strachan leads the Sun Belt with 6.5 tackles for a loss and five sacks. In his last two games, Strachan has four sacks, 4.5 tackles for a loss, two fumble recoveries and two caused fumbles.

“He was going to have an extremely successful year for us last season. He had that injury and had to battle back physically and mentally,” Elliott said. “It’s amazing to think he was a free safety and now he’s an outside linebacker coming off the edge. He has great power and presence in his pass rushing ability. He’s got a knowledge of stripping the football and getting it out of the quarterback’s hands. He’s done everything we asked him to do.”

Coastal Carolina receiver Jaivon Heiligh worked on his speed and quickness during the offseason, and he’s reaping the benefits thus far. He has team highs with 25 catches, 434 yards receiving and four touchdown receptions.

“He always was able to make some plays on the ball, but he’s gotten faster and has given himself another threat that people have to be aware of,” Chadwell said. “We’re able to put him a lot of different positions and he really has the offense down. We can line him up in some different areas where they can’t just key on him.

Elliott has tried to calm down quarterback Quad Brown and let him know it’s impossible to be perfect on every throw. Georgia State is coming off a 36-34 victory at Troy.

“I told him that punting the football is not the worst,” Elliott said. “He seems to think it’s the worst thing ever. Listen, a lot of times that’s beneficial. You don’t have to win the game with every throw. I want him to understand that. He’s a great young man who has a lot of confidence, and I want him to understand that the game can’t be won on every single play. I certainly don’t fault him for that.”

Payton was intercepted twice by Georgia Southern in the first half last week, but he did not turn the ball over in the second half, as he went 8 of 16 passing for 90 yards and ran five times for 49.

“We had complete confidence going in with Fred,” Chadwell said. “We knew he’d be rusty. He just needed to get some more playing time. We weren’t surprised by it. That would be the expectation, for him to go out and play at another high level.”

Elliott has received a three-year contract extension through the 2024 season. He is in his fourth season at Georgia State and is 17-23 over that span.