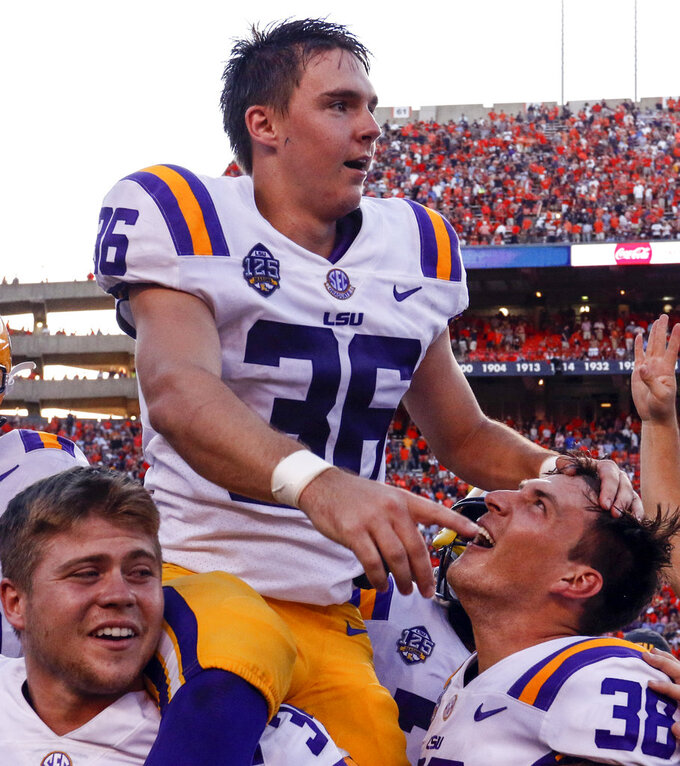 LSU place kicker Cole Tracy (36) is hoisted on the shoulders of his teammates after kicking the winning field goal to defeat Auburn 22-21 during the second half of an NCAA college football game, Saturday, Sept. 15, 2018, in Auburn, Ala. (AP Photo/Butch Dill) 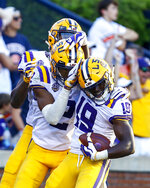 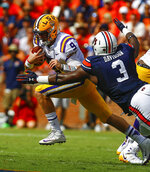 AUBURN, Ala. (AP) — Cole Tracy kicked a 42-yard field goal on the final play to give No. 12 LSU a 22-21 victory over No. 7 Auburn on Saturday in their Southeastern Conference opener.

Joe Burrow led LSU (3-0) down the field in the final minutes with clutch plays and two pass interference calls against Auburn (2-1). That set up Tracy's field goal that was almost right down the middle and sent LSU players swarming onto the field to celebrate.

"There was no question in my mind that he was going to make this field goal," LSU coach Ed Orgeron said. "It worked out perfect."

It capped a wild fourth quarter in a rivalry that has produced many of them.

The LSU defense held to set up another chance with 5:38 remaining. The result was a 14-play, 52-yard drive and Tracy's kick.

"I knew on Monday that it was going to come down to this," he said. "Once we got past Southeastern (Louisiana), you know that when you're playing at Auburn, it's going to be a close game."

A pass interference call against Jeremiah Dinson on third-and-11 kept the drive alive. Then Burrow hit Stephen Sullivan for 9 yards on fourth-and-7 to keep the offense on the field.

"When you get put out at the end of the game in that situation, you've got to shut it down," Auburn defensive lineman Derrick Brown said.

Burrow held his own against Auburn's more heralded Jarrett Stidham. He completed 15 of 34 passes for 249 yards, with Justin Jefferson gaining 97 yards on five catches.

Stidham was 16 of 28 for 198 yards and a touchdown but threw two interceptions. JaTarvious Whitlow ran for 104 yards on 22 carries.

LSU, which trailed 21-10 in the second half after scoring the first 10 points, overcame a 20-0 deficit against Auburn to win last season.

"It was a dogfight from the get-go," Auburn coach Gus Malzahn said. "We had the turnover early and they got the score. We got behind but dug ourselves out of the hole with a halftime lead. Third quarter we were doing a good job.

"We were close to getting some distance with a chance to put the game away. We didn't make the plays to do that."

LSU: Struggled to sustain solid start offensively after outgaining 188-63 in building the 10-0 lead. But kept coming back to secure its second win over a Top 10 opponent after opening with a victory over then-No. 8 Miami.

Auburn: Stidham started out 0-for-4 passing with an interception on his first attempt, but regrouped nicely. Auburn couldn't produce late against a tough LSU defense, creating an uphill battle for a second straight SEC West title.

LSU safety John Battle was ejected after a targeting call early in the fourth quarter. He made a helmet-to-helmet hit on Anthony Schwartz.

LSU gets a break from SEC games with a visit from Louisiana Tech.