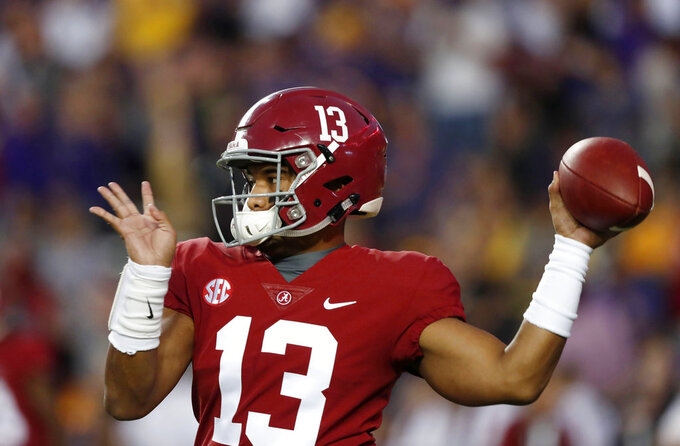 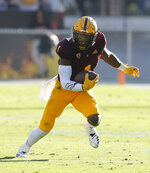 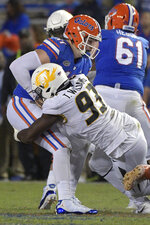 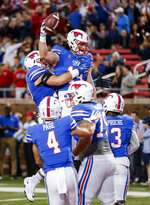 Tagovailoa took the field wearing a brace on right knee, threw his first interception of the season late in the first half and also played into the fourth quarter for the first time this season. None of those developments proved consequential. He was 25-of-42 passing for 295 yards and moved as well as well as he needed to, particularly when he sprinted up the middle of the field or his long TD run in the third quarter to give Alabama (9-0, 6-0 SEC, No. 1 CFP) a 22-0 lead.

Tagovailoa limped off the field after that play, went into the medical tent for some treatment and rode a stationary bike on the sideline, but returned for the next series.

LSU (7-2, 4-2, No. 3 CFP) entered a chance to control of the SEC Western Division with a victory, but that began to decreasingly realistic with every possession.

Alabama led 16-0 by halftime and forced LSU punts on the Tigers' first nine possessions. LSU drove to the Alabama 15 on its 10th series early in the fourth quarter, only to miss a field goal with 10:45 to go.

Tigers quarterback Joe Burrow completed 18 of 35 passes for 184 yards. He was sacked five times and had a pass intercepted.

The Tigers (6-0 Atlantic Coast Conference, No. 2 CFP) improved to 9-0 for the third time in four seasons and can wrap up their fourth ACC Atlantic Division title next week at Boston College.

Freshman Lyn-J Dixon ran for 116 yards, the second time this season Clemson has had three runners with 100 or more yards. They finished with a season high 492 yards rushing.

Linebacker Isaiah Simmons had a pick-six, the Tigers collected five sacks, coach Dabo Swinney's eldest son Will caught a TD pass and even "Big Dex," a junior defensive tackle projected as a can't-miss, NFL first-rounder got in on the fun in the Tigers' "Fridge Package" against overmatched Louisville (2-7, 0-6).

The Fighting Irish (9-0, No. 4 CFP) remained in line for a playoff spot and continued to build on their best start since the 2012 team went undefeated before losing to Alabama in the BCS championship game. The Wildcats (5-4) had won four in a row to grab the Big Ten West lead and they stayed in this one when it looked like Notre Dame was ready to pull away.

Book threw a 20-yard touchdown pass to a leaping Miles Boykin in the corner of the end zone and a 47-yarder to Michael Young in the third to give the Irish a 21-7 lead. He sealed it in the closing minutes when he turned up the left side for that 23-yard run.

The Wolverines (8-1, 6-0 Big Ten, No. 5 CFP) moved a step closer toward their goals of winning a conference championship for the first time since 2004 and earning their first spot in the College Football Playoff. The Nittany Lions (6-3, 3-3, No. 14 CFP) scored with 1:59 left, avoiding getting shut out for the first time since 2001 against Michigan.

Karan Higdon ran for 132 yards and a score that put the Wolverines up 35-0 early in the fourth quarter. Michigan held Penn State to 186 yards and forced three turnovers, including Tommy Stevens' interception that was returned 62 yards by Brandon Watson for a touchdown.

Swift had an 83-yard breakaway in the third quarter that gave Georgia (8-1, 6-1, No. 6 College Football Playoff) a 28-3 lead. He also had a nifty 20-yard scoring run in the second period when the game was close. Elijah Holyfield ran for a career-high 115 yards on 18 carries, scoring on a 4-yarder in the third quarter.

LUBBOCK, Texas (AP) — Kyler Murray recovered from a pair of early interceptions that led to a two-touchdown deficit, throwing for 360 yards and three touchdowns and running for 100 yards and another score to rally Oklahoma.

Trey Sermon set career highs with 206 yards rushing and three TDs as the Sooners (8-1, 5-1 Big 12) stayed in the hunt for a return to the College Football Playoff with their 19th straight win in a true road game and 14th consecutive November victory.

Oklahoma was seventh in the first playoff rankings released this past week.

The Red Raiders (5-4, 3-3) led 31-28 at halftime, but freshman quarterback Alan Bowman didn't return in the second half of their eighth straight loss against a Top 10 team going back to 2012. Texas Tech officials didn't immediately say why Bowman left the game.

Texas Tech punted three straight times without getting a first down after Jett Duffey replaced Bowman again, just as he did five weeks ago when Bowman sustained a partially collapsed lung against West Virginia. Bowman returned two weeks ago against Kansas.

Duffey then started moving the Red Raiders, and they pulled within two on his 4-yard scoring pass to Zach Austin on fourth down midway through the fourth quarter. But Robert Barnes intercepted the 2-point conversion pass and returned it 98 yards for two points and a 44-40 OU lead.

After Nebraska quarterback Adrian Martinez threw a 17-yard touchdown pass to JD Spielman to pull within five with 3 minutes left, Dobbins pounded away for two first downs to run out the clock.

Before the late Nebraska score, Dobbins broke through the right side and romped for a 42-yard touchdown with 5 minutes left to give Ohio State (8-1, 5-1 Big Ten, No. 10 CFP) breathing room.

Dobbins rushed for a season-high 163 yards — only his second 100-yard game this season. Running back Mike Weber added 91 yards on the ground.

AUSTIN, Texas (AP) — Will Grier threw a 33-yard touchdown pass to Gary Jennings with 16 seconds left, and then ran in the 2-point conversion to lift West Virginia past Texas.

Grier broke his finger on a run to the pylon in the first quarter of a loss to Texas last year, and his winning run came on a similar scramble. But there was no defender near him this time as he held the ball up while crossing the goal line untouched.

The 2-point conversion came moments after Grier connected with David Sills. Texas had called timeout just before the ball was snapped so the Mountaineers had to line up again. Grier dropped back, took a step into the pocket, and then swung out to his left to break for the corner of the end zone.

Lock completed 24 of 32 passes for 250 yards, with scoring throws to Albert Okwuegbunam, Kam Scott and Emanuel Hall that stunned the Swamp. Fortunately for the Gators (6-3, 4-3 Southeastern Conference), they won't have to face the senior and possible first-round draft pick again.

They might have seen the last of Feleipe Franks, too.

Coach Dan Mullen benched Franks late in the third quarter — the home crowd cheered wildly — and backup Kyle Trask promptly directed a 75-yard touchdown drive in which he converted two fourth downs. Trask found Josh Hammond in the end zone on the second one for a 7-yard score that made it 35-17.

The Tigers (5-4, 1-4) responded with a field goal that essentially sealed their first SEC win of the season and sent fans scrambling for the exits.

Huntley was injured when he was hit while forcing a throw with 5:33 left in the third quarter. Freshman Jason Shelly replaced him and the offense struggled after that.

Harry caught nine passes for 161 yards, including TD catches of three, 23 and 61 yards. His three TD catches were a career high. Wilkins completed 19 of 24 for 285 yards and three scores with one interception. Eno Benjamin rushed for 175 yards, including a 44-yard TD run that sealed the victory with 4:12 to play. Arizona State (5-4, 3-3) gained 536 yards against a Utah defense that had been ranked No. 1 in the Pac-12.

The Mustangs (4-5, 3-2 American) never trailed, jumping out to a 17-0 lead after Hicks threw his second TD, a 17-yarder to Tyler Page less than a minute into the second quarter. Houston played its first game as a ranked team under second-year coach Major Applewhite.

Hicks threw three touchdowns as a redshirt freshman in the shocker two years ago, when SMU beat the then-No. 11 Cougars 38-16 and knocked them all of the way out of the poll.

After Houston (7-2, 4-1, No. 17 CFP) got to 38-31 on quarterback D'Eriq King's 3-yard touchdown run with 9:34 left, the Mustangs went on a time-consuming 13-play drive that ended with Ke'Mon Freeman's second touchdown run, an 8-yarder with 2:43 left. That drive was interrupted for about 90 minutes because of lightning and heavy rain. Freeman ran 20 times for 107 yards.

Jordan Love threw a 16-yard touchdown pass to Ron'quavion Tarver and ran in a 1-yard score on the final play of the first quarter.

Cole McDonald threw a pair of touchdown passes for Hawaii, which finished with 390 yards of total offense.

David Blough threw three touchdown passes to Terry Wright and topped the 300-yard mark for the fifth time this season. The Boilermakers (5-4, 4-2 Big Ten) have won five of their last six and beat their third ranked team this season — the first time they've achieved that feat since 2003 — to move within one game of division leader Northwestern.

The Hawkeyes (6-3, 3-3) lost their second straight road game despite Nate Stanley's big day. The junior quarterback threw for 275 yards with one TD and ran for another but the conference's No. 2 scoring defense allowed a season-high point total.And when the Hawkeyes needed one last stop, Blough drove Purdue 43 yards to set up Evans for the winning kick.

Fresno State (8-1, 5-0 Mountain West) won its seventh straight and ended its two-game losing streak to the Rebels. The Bulldogs kept their one-game lead in the West Division over San Diego State, which won at New Mexico 31-23 Saturday night.

McMaryion completed 26 of 35 passes and rushed for 39 yards as his defense held UNLV to 175 total yards of offense through three quarters.

KeeSean Johnson had eight receptions for 97 yards to move his streak to 45 consecutive games with a catch. Coming into Saturday, Johnson led the nation in active career receptions at 234.

Fresno State's defense only allowed the Rebels over midfield twice in the first three quarters.

Mississippi State (6-3, No. 18 CFP) didn't have much trouble, scoring 21 points in the first quarter of what quickly turned into a lopsided game. Fitzgerald completed 17 of 28 passes and threw his touchdowns to Stephen Guidry, Deddrick Thomas, Kylin Hill and Jesse Jackson.

Fitzgerald also ran for 107 yards. Mississippi State has a 16-3 record during Fitzgerald's career when he breaks the 100-yard mark.

Louisiana Tech (6-3) was competitive in a loss to LSU this season, but its second game against a Southeastern Conference opponent didn't go well. J'Mar Smith completed 14 of 30 passes for 98 yards.

BC (7-2, 4-1 Atlantic Coast Conference, No. 22 CFP) limited the Hokies to 32 yards in the third quarter and erased a 14-7 deficit with 21 unanswered points after halftime. First-place in the ACC Atlantic Division will be on the line when the second-ranked Tigers visit Boston College.

Ryan Willis threw for 281 yards with three touchdown passes for Virginia Tech (4-4, 3-2), but the Hokies lost their third straight at home for the first time since 1992. It came on a day when they could have moved into a share of first place in the Coastal Division with a victory.

The Tigers (6-3, 3-3 Southeastern Conference) had a 14-point outburst over the final 5:14 and the defense came up with big stops. Stidham delivered big on both final drives.

Kellen Mond and the Aggies (5-4, 3-3) pushed the ball into Auburn territory on their final drive, converting a fourth-and-5. Then a holding call pushed them back across midfield and Mond's desperation pass into the end zone was incomplete. Officials put a second back on the clock, and Mond was sacked by Nick Coe on the final play.