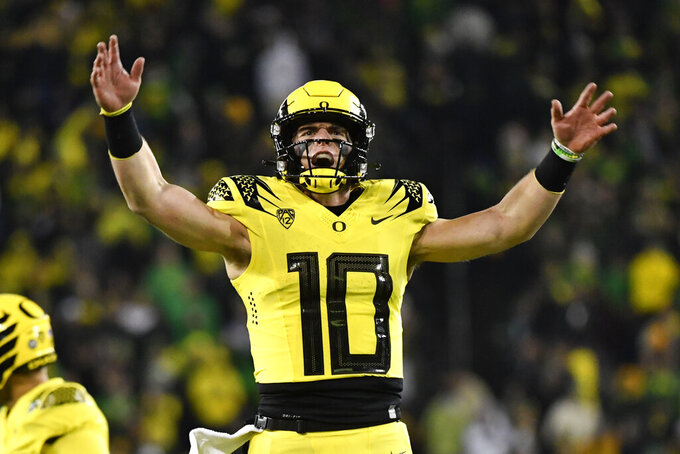 The Pac-12's big weekend turned out to be not quite as big as it could have been after some upsets last week.

Still, the conference's marquee matchups are the highlights of this weekend's schedule, with four top-16 teams that could determine who plays in the league championship game.

Those loses left the Trojans as the Pac-12's last hope to get a team in the College Football Playoff. The self-described Conference of Champions has not had a CFP team since 2016.

The five most intriguing games of Week 12:

No. 7 Southern California at No. 16 UCLA

The future Big Ten rivals haven't played with both ranked since 2014. The last time they were both ranked anywhere near this high was 2005, when the top-ranked Trojans hammered the No. 11 Bruins, 66-19. UCLA dropped 62 on USC last season and Bruins QB Dorian Thompson-Robinson was talking about getting to 60 again this week. Considering the way these two teams play defense, it's very possible. If USC wins, it's in the Pac-12 title game. If UCLA wins, it would still have work to do.

The Horned Frogs (10-0) keep rolling along, winning close games and staying unbeaten. The Bears are coming off their worst performance of the season against Kansas State. Still, Baylor (6-4) has shown it can at times play at a high level and the rivalry between the Horned Frogs and Bears is sneaky intense.

The Ducks' playoff hopes went out the window last week, but they still control their path to the Pac-12 title game. The Utes would be in great shape to defend their Pac-12 title in Las Vegas with a victory. These two met twice last season, with Utah pounding the Ducks each time to the tune of 76-17.

The Hawkeyes' offense has come to life — relatively speaking — and just like that they are well-positioned to defend their Big Ten West title and return to Indianapolis for the conference title game. But who isn't still alive in the Big Ten West race? Stylistically and aesthetically, this game should be the antithesis of USC-UCLA.

No. 24 Oklahoma State at Oklahoma

Not much at stake for Bedlam this year with the Sooners (5-4) still working toward bowl eligibility. But in some ways that makes it even more intriguing. OU has dominated this rivalry (82-19-7). The Cowboys have a chance to win two straight for the first time since 2001-02.

Here is the rest of the Top 25, with lines from FanDuel Sportsbook:

Mustangs have won seven straight meetings since both joined the AAC ... TULANE 31-28.

In eight meetings since the Scarlet Knights joined the Big Ten, Rutgers has failed to break 10 points and is 0-8 ... PENN STATE 24-7.

Knights need to win out against Midshipmen and USF to host AAC title game ... UCF 31-17.

Irish have won eight straight against the Eagles since snapping a six-game skid in the series in 2009 ... NOTRE DAME 30-14.

Do the Mountaineers have another upset in them to help save coach Neal Brown's job? ... KANSAS STATE 31-17.

QB Jordan Travis and the Seminoles are looking to roll into rivalry game with Florida off a fourth straight blowout victory ... FLORIDA STATE 34-14.

Boise State at Wyoming (plus 13)— @MDWDFW. First-place on the line, Broncos can clinch a spot in the Mountain West title game ... BOISE STATE 27-17.