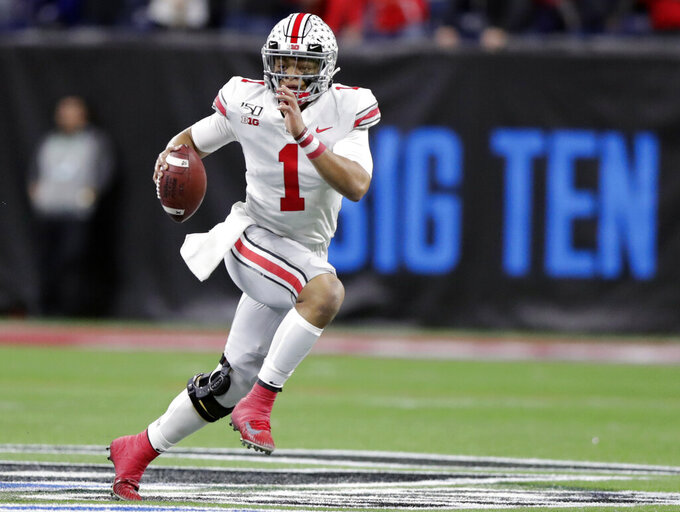 FILE - In this Dec. 7, 2019, file photo, Ohio State quarterback Justin Fields (1) runs with the ball against Wisconsin during the first half of the Big Ten championship NCAA college football game, in Indianapolis. The ACC, Big 12 and SEC have been playing anywhere from three to five weeks amid the pandemic, and all the players and coaches around the Big Ten could do is watch. “Most of it's been torture, just not being able to play games,” Ohio State coach Ryan Day said. (AP Photo/Michael Conroy, File)

The conference that called off fall football in August only to reverse course a month later kicks off a nine-week season with no breaks and five teams already in the AP Top 25.

No. 14 Wisconsin and Illinois get things rolling Friday night at Camp Randall. “Jump Around” won't be the same between the third and fourth quarters without fans in the stands, but with a high of 49 degrees and showers forecast for Madison, it will be a perfect setting for Badgers-style bully ball.

No schools pushed harder for the Big Ten to play through the pandemic than Ohio State and Nebraska. The fifth-ranked Buckeyes open at home against the Cornhuskers as a huge favorite. The forecast calls for 54 and mostly cloudy in Columbus.

The Huskers drew the toughest early season schedule in the reboot, getting Wisconsin next week and No. 8 Penn State in the Big Ten's week four. Nebraska was also the most openly critical of the Big Ten's decision to postpone. Coincidence?

The Nittany Lions open at Indiana, a scrappy team coming off an eight-win season. It will be 55 and mostly cloudy in Bloomington.

The showcase game in primetime is No. 18 Michigan at No. 21 Minnesota in the Little Brown Jug game. The temperature in Minneapolis is expected to be in the mid-20s.

Let's not forget the Mountain West also starts this week to provide some late-night viewing that has been sorely lacking in a season that so far has mostly played out in the Eastern and Central time zones.

Kicking off at 10:30 p.m. ET will be UNLV at San Diego State and Air Force at San Jose State.

Grab a blanket and a warm drink, sink into the couch, and enjoy the first long and chilly day of the college football season.

Badgers have won their last three openers by a combined 129 points ... WISCONSIN 35-14.

The Crimson Tide winning streak against the Vols is 13, including the last four by an average of 34 points ... ALABAMA 47-13.

Prepare for a tsunami of snarky social media comments about why the Cornhuskers were so adamant to play this season when they fall behind by three touchdowns ... OHIO STATE 42-21.

Bearcats and Mustangs have gone to overtime in their last two meetings, splitting the games ... SMU 35-31.

BYU QB Zach Wilson leads FBS with a 78.7 completion percentage and Texas State is allowing quarterbacks to complete 70.6% of its passes ... BYU 52-21.

The 100th meeting between the Wolfpack and Tar Heels, and just the third when both are ranked; UNC is 2-0 in those games ... NORTH CAROLINA 42-23.

Wildcats have won 11 straight in the series and Jayhawks RB Pooka Williams just opted out of the season ... KANSAS STATE 35-17.

Florida State (plus 5) at Louisville — @_calebbailey

Seminoles have found some offensive answers behind the running of QB Jordan Travis ... FLORIDA STATE 31-28.

Boilermakers will play without coach Jeff Brohm on the sideline after he tested positive for COVID-19 ... PURDUE 27-23.

Baylor (plus 9) at Texas — @TexasFancyBoots

Houston (minus 14) at Navy — @alanwooten

Appears the Midshipmen are returning to form after two straight victories ... HOUSTON 38-21.

Auburn (minus 3) at Mississippi — @DaveCMckinney