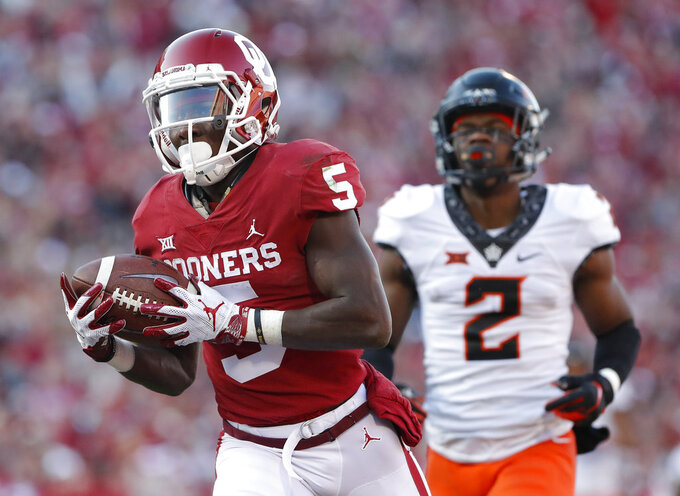 FILE - In this Nov. 10, 2018, file photo, Oklahoma wide receiver Marquise Brown (5) runs in for a touchdown ahead of Oklahoma State cornerback Tanner McCalister (2) in the second quarter of an NCAA college football game in Norman, Okla. The Sooners and Longhorns are loaded with playmakers on the outside, but the ones with the best case to be All-Americans are Oklahoma’s Marquise Brown and Texas’ Lil’Jordan Humphrey. (AP Photo/Alonzo Adams, File)

There was a time when the Big 12 championship game was routinely a dream-wrecker for national title contenders.

From the first Big 12 title game in 1996 to 2010, the last before it took a hiatus while the conference realigned, the league's championship was won by the lower-ranked team five times. There was also a memorable near-upset.

No. 9 Texas tries to become the latest Big 12 team to spoil the conference's chances at a national championship Saturday when it faces No. 5 Oklahoma in Arlington, Texas. The Longhorns beat the Sooners in the regular season on a last-second field goal.

Missouri was No. 1 in the country in the unpredictable 2007 season when it was beaten by Oklahoma in the Big 12 title game. Texas nearly had a BCS championship game appearance slip away in 2009 when it beat Nebraska 13-12, a game remembered most for Ndamukong Suh's dominant performance for the Cornhuskers.

The return of the Big 12 title game came with a new format. The 10-team conference no longer has divisions, but matches Nos. 1 and 2 in the standings. And because the Big 12 plays a round-robin, nine-game conference schedule, the championship game will always be a rematch. Conference leadership believed it needed an extra quality game to best position its champ for playoff selection and the risks outweighed the reward.

Oklahoma beat TCU to make the playoff last season. We'll see if Big 12 volatility makes an appearance with the Sooners in prime position to make it again, sitting at fifth in the playoff rankings, behind Georgia, which plays top-ranked Alabama in the Southeastern Conference championship.

MAC championship: Buffalo (minus 4) vs. Northern Illinois at Detroit

Utes looking for first Pac-12 championship since joining the conference in 2011 ... WASHINGTON 21-20.

American Athletic championship: Memphis (plus 3) at No. 7 UCF

Last two meetings, including last season's AAC championship, have been wild affairs. The Knights won both by a combined 92-85, but UCF won't have injured QB McKenzie Milton this time ... MEMPHIS 38-35.

ACC championship: Pittsburgh (plus 26½) vs. No. 2 Clemson at Charlotte, North Carolina

Big Ten championship: No. 21 Northwestern (plus 14) vs. No. 6 Ohio State at Indianapolis

Big 12 championship: Texas (plus 7½) vs. Oklahoma at Arlington, Texas