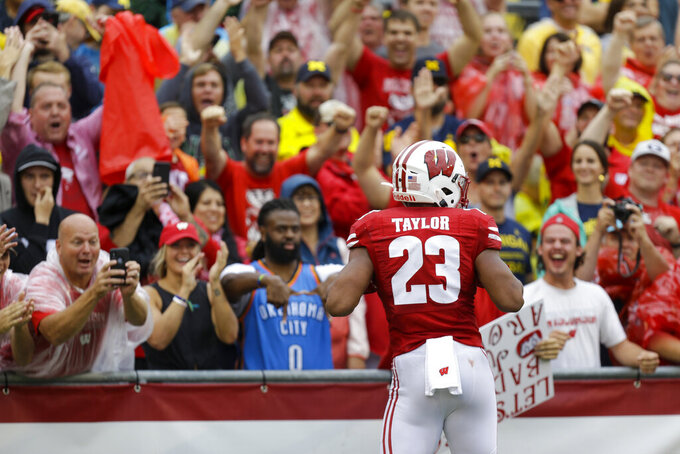 Wisconsin running back Jonathan Taylor celebrates a touchdown against Michigan during the first half of an NCAA college football game Saturday, Sept. 21, 2019, in Madison, Wis. (AP Photo/Andy Manis)

As any artist who has ever produced a hit record will attest, the follow-up can be a real challenge.

Last week, Wisconsin, Auburn and Southern California were at the top of the charts in college football, registering big wins and looking like teams that could seriously contend for conference titles. Now come the follow-ups, with varying degrees of difficulty.

No. 7 Auburn returns home after knocking off Texas A&M to face Mississippi State in a series the Tigers dominated for a long time but has recently played about even.

No. 8 Wisconsin would seem to have the easiest task with struggling Northwestern coming to Madison, a week after the Badgers bullied Michigan. Then again, the Wildcats have been a real nuisance for Wisconsin recently. The Wildcats have won three of the last five meetings.

No. 21 USC popped back into the rankings after beating Utah at the Los Angeles Coliseum and now heads to No. 17 Washington for what could turn be a pivotal game for both Pac-12 divisions. Not to mention the status of Trojans coach Clay Helton. A second Pac-12 loss could all but doom the Huskies before September ends while USC could go to 3-0 in the South Division.

No. 10 Notre Dame faces a different type of follow-up, coming of a rugged loss at Georgia. The Irish most refocus quickly with No. 18 Virginia coming to town or all that credibility they built up by hanging with the Bulldogs will be burned.

First road trip of the season for the Nittany Lions, who are still kind of a mystery team ... PENN STATE 28-21.

Crimson Tide has won 28 straight at home, the last loss coming to Ole Miss in 2015 that was the second of consecutive wins by the Rebels in the series. That seems like a very long time ago ... ALABAMA 52-13.

Red Raiders will try to keep up with QB Jalen Hurts and the Sooners without injured QB Alan Bowman ... OKLAHOMA 52-28.

Could be an SEC battle of freshman quarterbacks with Bo Nix for Auburn and Mississippi State still starting Garrett Shrader in place of Tommy Stevens (shoulder) ... AUBURN 24-17.

Northwestern (plus 24) at No. 8 Wisconsin

Nothing about the way these teams have played suggests this should he close ... WISCONSIN 35-7.

Player you should know: Virginia LB Charles Snowden, who had 15 tackles and two sacks last week in a win over Old Dominion ... NOTRE DAME 24-16.

Last tuneup before the Hawkeyes get serious in the Big Ten ... IOWA 42-14.

Utes could be without star RB Zack Moss, and QB Tyler Huntley's status is up in the air ... WASHINGTON STATE 28-27.

There's no good time for the Huskies to face the Knights, but following a UCF loss is particularly problematic ... UCF 56-14.

Aggies have won seven straight against the Razorbacks since moving to the SEC, but four of the last five have been seven-point games ... TEXAS A&M 35-17.

Hoosiers QB Michael Penix (undisclosed injury) will be a game-time decision; Indiana will need him against a nasty Spartans defense ... MICHIGAN STATE 27-20.

Iowa State (minus 2½) at Baylor — @SUSIEALLRED1

Bears are paying some salty defense, albeit against the softest of nonconference schedules ... IOWA STATE 23-18.

UCLA (plus 7½) at Arizona — @IrishHoodlum

Bruins scored more points (50) in the second half of their comeback against Washington State than they did in their first three games ... ARIZONA 35-29.

Kentucky (plus 3) at South Carolina — @johnboyette

Wildcats have won five straight in the series and if they make it six, the Gamecocks are in serious danger of not getting bowl eligible ... KENTUCKY 23-21.

With a trip to Clemson looming, Seminoles try to string together consecutive victories for the first time since September 2018 ... FLORIDA STATE 31-23.

After opening the season with four straight Power Five opponents, the Cougars face a tricky visit to the MAC ... TOLEDO 31-28.