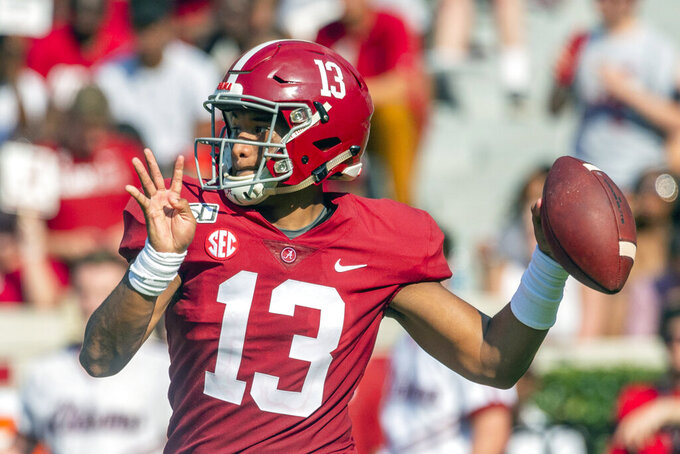 FILE - In this Sept. 7, 2019, file photo, Alabama quarterback Tua Tagovailoa (13) looks to throw during the first half of an NCAA college football game against New Mexico State, in Tuscaloosa, Ala. For the first time in college football history, there will be two games matching teams of at least 8-0 on the same day, according to ESPN Facts and Info. In Tuscaloosa, Alabama, LSU and the Crimson Tide will play the first regular-season game matching AP Nos. 1 and 2 since 2011 _ when No. 1 LSU beat No. 2 Alabama 9-6 in overtime. (AP Photo/Vasha Hunt, File) 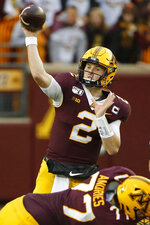 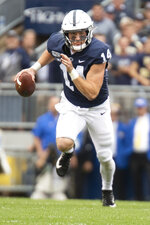 The starting positions have been set for the College Football Playoff race. They will get an immediate makeover this weekend.

For the first time in college football history, there will be two games matching teams that are at least 8-0 on the same day, according to ESPN researchers.

Top-ranked LSU visits Alabama to play the first regular-season game matching AP Nos. 1 and 2 since 2011 — when No. 1 LSU beat No. 2 Alabama 9-6 in overtime. The CFP selection committee has LSU and Alabama ranked second and third, respectively, this week, but what fun is that? The Crimson Tide has won eight straight meetings since the last Game of Century in '11.

Regardless of the numbers, the winner is likely to be (almost) everybody's No. 1 next week, while the loser will be No. 2 — in the SEC West.

The other big game nobody would have seen coming back in September, when No. 13 Minnesota was barely scraping by against South Dakota State, Georgia Southern and Fresno State. The Gophers, 8-0 for the first time since 1941, host No. 5 Penn State.

The selection committee wasn't so impressed with Minnesota and ranked the Gophers 17th on Tuesday night, well behind the Nittany Lions (No. 4 CFP).

In a twist, you'll be able to watch both big games, have a late dinner and still be asleep by 11 p.m. on the East Coast. The Big Ten game is at noon and, for the first time since 2010, LSU-Alabama is an afternoon game, kicking at 3:30 p.m.

Score one for the early to bed, early to rise crowd. The picks:

Only once since 2007 have the Tigers and Tide combined to reach the 50-point mark; They come into this game averaging a combined 95 points ... ALABAMA 35-28.

Can Buckeyes DE Chase Young build on his Heisman momentum against an overmatched opponent the way offensive players can? ... OHIO STATE 56-10.

Defending national champion Tigers, fifth in the CFP rankings, might be a little ticked ... CLEMSON 45-10.

It is really hard to run against the Nittany Lions; No team in the Big Ten runs more and passes less than the Gophers ... PENN STATE 23-17.

Sooners have already taken their almost annual upset as a double-digit favorite. Another one would be devastating ... IOWA STATE 35-34, UPSET SPECIAL.

Hawkeyes are averaging 18.2 points in Big Ten games and that includes 30 against Rutgers ... WISCONSIN 16-9.

Bearcats needed a late rally to escape last week at East Carolina. Shouldn't be a problem this week ... CINCINNATI 45-7.

Pirates have shown some fight, but still have lost four straight ... SMU 48-21.

Demon Deacons victory sets up a first-place showdown at Clemson next week. How about that? ... WAKE FOREST 31-27.

Tennessee (minus 1) at Kentucky — @JeffMuirBP

Wildcats WR-turned-QB Lynn Bowden Jr. has run for 499 yards in last three games and has not thrown an interception in 33 attempts ... TENNESSEE 21-17.

Louisville (plus 6½) at Miami — @laruerobinson

Hurricanes were an unlucky team early in the season and could still finish strong ... MIAMI 28-20.

Illinois (plus 15) at Michigan State — @GARandall