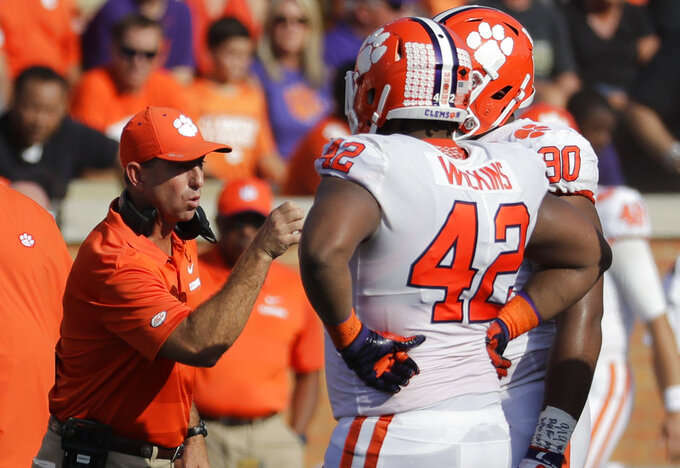 FILE - In this Oct. 6, 2018, file photo, Clemson head coach Dabo Swinney talks to his team during the first half of an NCAA college football game against Wake Forest in Charlotte, N.C. Thirteen ranked teams are playing road games this weekend, from No. 2 Clemson to No. 25 Appalachian State, and only two are playing other ranked teams. The Tigers take on Florida State on Saturday. (AP Photo/Chuck Burton, File)

For many ranked teams, the last chance to influence the College Football Playoff selection committee before its first ranking of the season will come away from home.

Thirteen ranked teams are playing road games this weekend, from No. 2 Clemson to No. 25 Appalachian State, and only two are playing another ranked team. That's not including No. 3 Notre Dame taking on Navy in San Diego and No. 7 Georgia and No. 9 Florida having their annual meeting in Jacksonville, Florida.

All that travel raises the likelihood of upsets and unexpected results, like last week when Purdue pounced on Ohio State in West Lafayette, Indiana.

The 13-member committee meets this weekend and its first rankings will be unveiled Tuesday night. There is a long way to go and history suggests there will be plenty of movement between the first rankings and the final selections on Dec. 2. The committee's first top four has never been the same as its final one.

No. 1 Alabama is off this week. Same goes for No. 4 LSU. The Crimson Tide and Tigers play Nov. 3, ensuring at least some shake up from week one to week two of the rankings. No. 5 Michigan, No. 10 Central Florida and No. 11 Ohio State are also off.

Bears need two more victories for bowl eligibility and will need to pull off at least one upset to get there ... WEST VIRGINIA 35-24.

No. 25 Appalachian State (minus 10½) at Georgia Southern

Seminoles have a chance to turn their season around, but face a difficult back end of the schedule, starting with the Tigers ... CLEMSON 31-14.

Fighting Irish had an open date to prepare for the triple option ... NOTRE DAME 35-17.

Longhorns have lost three straight to the Cowboys, who are pretty much out of the Big 12 race but could play spoiler ... OKLAHOMA STATE 24-21, UPSET SPECIAL.

Huskies have won eight of nine in the series and still control their Pac-12 title hopes ... WASHINGTON 28-14.

The demise in the play of Wildcats QB Khalil Tate, uncertain with an ankle injury this week, has been one of the sadder stories of this season ... OREGON 28-21.

No. 20 Wisconsin (minus 7) at Northwestern

North Carolina (plus 9) at Virginia — @MBeutell25

Cyclones try to make it three straight victories behind freshman QB Brock Purdy, who has completed 75 percent of his passes for 572 yards and seven touchdowns in wins against Oklahoma State and West Virginia ... IOWA STATE 31-30.

Tennessee (plus 7½) at South Carolina — @jclowersVFL

Last six meeting have been decided by an average of 3.0 points with each team winning three ... SOUTH CAROLINA 27-24.