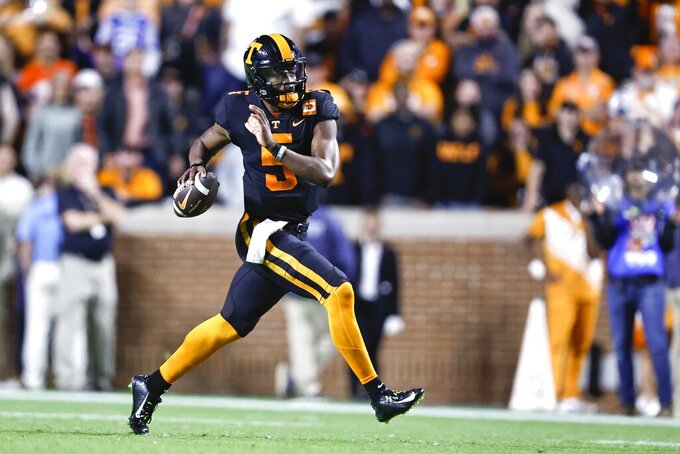 Tennessee quarterback Hendon Hooker (5) rolls out to pass during the first half of an NCAA college football game against Kentucky, Saturday, Oct. 29, 2022, in Knoxville, Tenn. (AP Photo/Wade Payne)

The College Football Playoff and the Bowl Championship Series before it made No. 1 vs. No. 2 rather routine in the postseason.

Before all that, back in the old bowl system, everything needed to fall into place just right so No. 1 could play No. 2 for a national title. Then the BCS-style postseason was built to create that outcome, which was a good idea.

The No. 1 vs. No. 2 regular-season game is still fairly rare. No. 1 Georgia facing No. 2 Tennessee on Saturday is just the 25th meeting between AP's top two teams in the regular season. It is fifth this century.

No. 1 has won each of the past four 1-2 tilts, with LSU beating Alabama in 2019 and '11. In 2006, Ohio State played in two 1-2 games as the top-ranked team in the country, winning at Texas in September and beating Michigan in November. The Buckeyes then lost a 1-2 BCS championship game to second-ranked Florida.

The most intriguing game of Week 10 was an easy pick:

The Volunteers and Bulldogs have never even played a top-five matchup before this weekend's “Game of the Century.” The winner takes command of the SEC East and virtually locks up a spot in the conference championship game. Vols QB Hendon Hooker could build a massive lead in the Heisman Trophy race by adding the defending national champions to the list of teams he has toppled along with Alabama.

No. 5 Clemson at Notre Dame

This looked like a potentially huge game when the Tigers and Fighting Irish were preseason top-five teams. Three losses later for Notre Dame the Irish are just trying to play spoiler against an unbeaten Clemson team that is heading for another ACC title.

Brian Kelly's first season at LSU is going better than many expected after the Tigers lost their opener to Florida State. LSU is ranked coming into this game for the first time in three years and Alabama has had some trouble on the road this season, but this seems like a big ask from a rebuilding program.

Texas at No. 13 Kansas State

The Wildcats are coming off a shutout of Oklahoma State, which just beat Texas two weeks ago. But this is the Big 12 and week-to-week the results can be all over the place. While unbeaten TCU and K-State lead the conference, Texas and Baylor are both very much alive with no more room for error.

No. 18 Oklahoma State at Kansas

The Jayhawks (5-3) were the feel-good story of the first month of the season, but have now lost three straight and still need one more victory to secure bowl eligibility. What to expect from an Oklahoma State team coming off the most-lopsided loss in 18 years with Mike Gundy as coach?

The rest of the games involving ranked teams, with lines from FanDuel Sportsbook.

Forecast is calling for a soggy and windy night in Seattle ... OREGON STATE 23-20.

Spartans will be down at least eight suspended players, including sack leader Jacoby Windmon, after last week's tunnel incident at Michigan ... ILLINOIS 27-13.

With a four-game winning streak, the Tar Heels have taken control of the ACC Coastal ... NORTH CAROLINA 31-14.

Golden Hurricane have won the last two meetings by a combined 13 points ... TULANE 27-21.

Two of the best running backs in the ACC on display with Sean Tucker of Syracuse and Pitt's Israel Abanikanda ... PITTSBURGH 24-23.

Flames only loss this season was by one point to Wake Forest ... ARKANSAS 42-24.