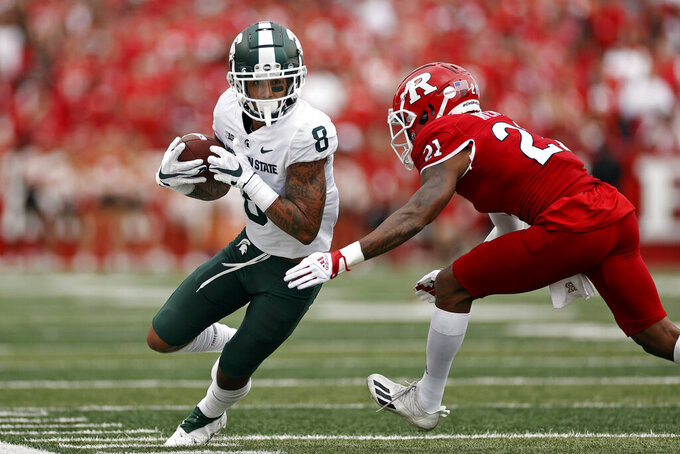 Michigan State wide receiver Jalen Nailor (8) is forced out of bounds by Rutgers defensive back Tre Avery during the first half of an NCAA college football game Saturday, Oct. 9, 2021, in Piscataway, N.J. (AP Photo/Adam Hunger)

—Jalen Nailor, Michigan State, had 221 yards receiving and three TDs as the Spartans remained unbeaten with a 31-13 victory over Rutgers.

—Frank Harris, Texas-San Antonio, threw for 349 yards and six TD, and hauled in a 23-yard TD reception in a 52-46 victory over Western Kentucky.

—Will Levis, Kentucky, threw for three TDs and ran for two more scores and the No. 16 Wildcats dominated LSU throughout in a 42-21 blowout.

—Brennan Armstrong, Virginia, threw for 487 yards and a 1-yard TD pass to Grant Misch with 22 seconds left to give the Cavaliers a stunning 34-33 comeback victory over Louisville.

—Cole Kelley, Southeastern Louisiana, threw for 406 yards and five TDs in a 58-48 win over Nicholls.

—Tyler Badie, Missouri, rushed for a career-high 217 yards and scored three TDs to lead the Tigers to a 48-35 victory over North Texas.

_Gerry Bohanon, Baylor, had career highs of 336 yards passing and four TDs, while also scoring on a 1-yard sneak in the Bears' 45-20 victory over West Virginia.

—Isaiah Malcome, Pennsylvania, rushed for 204 yards in a 20-0 win over Lehigh.

He fulfilled that promise in his first try since that vow Saturday night, handing the defending national champions their first loss since 2019 in a thrilling upset. Seth Small made a 28-yard field goal as time expired and Texas A&M stunned top-ranked Alabama 41-38 to end the Crimson Tide’s winning streak at 19 games.

Alabama had scored 21 straight points — capped by a TD reception and 2-point conversion grab by Jameson Williams — to take a 38-31 lead with five minutes to go.

Texas A&M tied it at 38 when Zach Calzada connected with Ainias Smith for a 25-yard touchdown with three minutes left. Calzada was hit as he threw the strike and had to be helped off the field but returned for the next drive after a visit to the medical tent.

Calzada returned after the Aggies forced a punt to orchestrate the winning drive, highlighted by a 17-yard pass to Isaiah Spiller before Small finished it off to send fans streaming onto the field to celebrate.

Kennedy Brooks took the final snap for sixth-ranked Oklahoma, after freshman quarterback Caleb Williams had taken over when Spencer Rattler was again benched in the Red River rivalry game.

Brooks ran for 217 yards and two go-ahead touchdowns in the fourth quarter, including a direct snap for a 33-yard game-winner with 3 seconds left, and the Sooners beat No. 21 Texas 55-48 in the highest-scoring game of 117 meetings in a series that will soon move to the Southeastern Conference.

The Sooners appeared to be trying to set up for a game-ending field goal when Brooks instead broke free for a sprint to the end zone.

The Sooners overcame a 28-7 deficit after the first quarter, matching the second-largest comeback in program history. And when it was over, Oklahoma students who were part of the sellout crowd at 92,100-seat Cotton Bowl Stadium streamed onto the field to celebrate with their team.

51_Years since Kentucky last started a season 6-0 before this season. Bear Bryant was the coach the previous time.

54_Years since Eastern Washington started 6-0 before this season.

Iowa was in victory formation and the emotion was about to spill over as dusk settled over Kinnick Stadium.

Spencer Petras took the last snap, took a knee and took off, apparently thinking he could get off the field before the students and other fans pouring out of the end zone seats could catch him.

He barely made it to midfield. That’s where he and his teammates were swarmed and the mosh pit formed on the Hawkeyes logo to celebrate No. 3 Iowa’s hard-earned 23-20 victory over fourth-ranked Penn State.

Petras threw a 44-yard touchdown pass to Nico Ragaini to complete Iowa’s comeback from a two-touchdown deficit, all accomplished while Penn State’s offense did next to nothing after quarterback Sean Clifford was knocked out of the game.