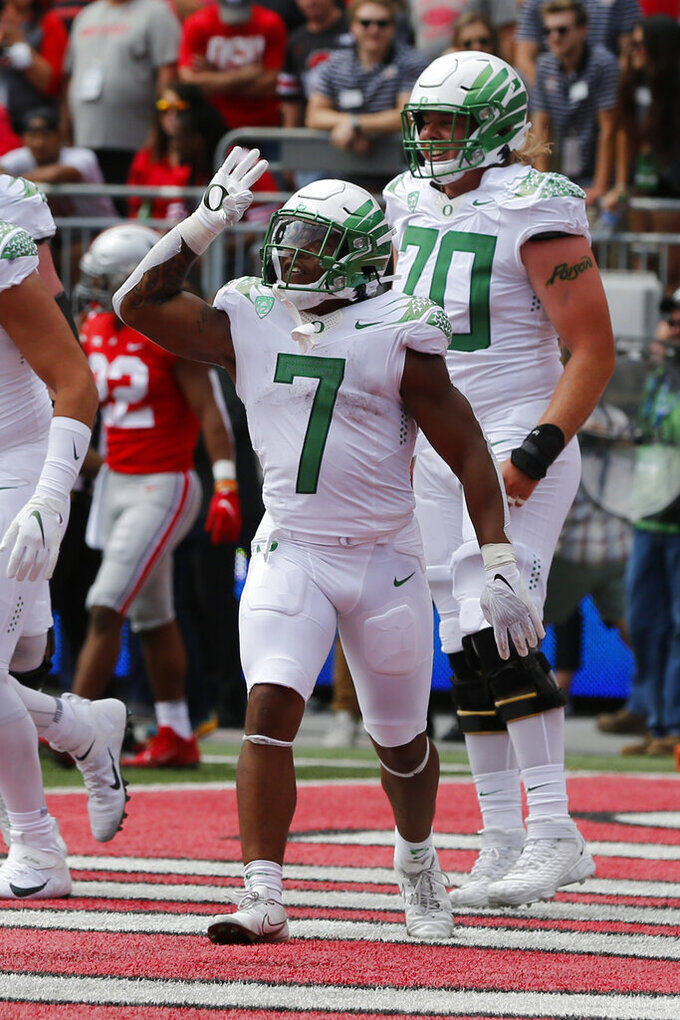 Oregon running back CJ Verdell celebrates his touchdown against Ohio State during the first half of an NCAA college football game Saturday, Sept. 11, 2021, in Columbus, Ohio. (AP Photo/Jay LaPrete)

—C.J. Verdell, Oregon, ran for 161 yards and had three TDs as the short-handed No. 12 Ducks upset the No. 3 Buckeyes 35-28 for their first regular-season loss in nearly three years.

—Stetson Bennett, Georgia, tied a school record with five TD passes filling in for injured starter JT Daniels, leading the No. 2 Bulldogs to a 56-7 rout of UAB.

—Brennan Armstrong, Virginia, threw for five TDs and became the third quarterback in program history to pass for over 400 yards in a 42-14 win over Illinois.

— Jayden Daniels, Arizona State, ran for a career-high 122 yards and went 20 of 29 passing for 175 yards, two touchdowns and an interception in the Sun Devils' 37-10 win over UNLV.

—Jaren Hall, BYU, threw three touchdown passes and totaled 241 yards of offense in the Cougars' 23-17 victory over No. 21 Utah.

—Tanner McKee, Stanford, passed for two touchdowns, rushed for another score and went 16 of 23 for 234 yards as the Cardinal beat No. 14 Southern California 42-28.

—Chris Rodriguez Jr., Kentucky, rushed for a career-high 207 yards and three of his four TDs, including the go-ahead score from 8 yards with 11:28 remaining, lifting the Wildcats to a 35-28 win over Missouri.

—Treyson Potts, Minnesota, rushed for 178 yards and two touchdowns in his first career start to help the Gophers fend off Miami of Ohio 31-26.

—Payton Thorne, Michigan State, threw for four touchdowns, including two long strikes to Jayden Reed, and ran for another score in a 42-14 victory over Youngstown State.

—Sam Howell, North Carolina, threw three TD passes and rushed for two more scores as the No. 24 Tar Heels shook off the disappointment of a loss in their opener with a 59-17 win over Georgia State.

—Hunter Rodrigues, UC Davis, passed for 322 yards and accounted for five TDs in a 53-7 win over San Diego.

—Ren Hefley, Presbyterian, threw for 386 yards and five TDs in a 68-3 rout of Fort Lauderdale.

—Camron Humphrey, Montana, threw a career-high five TD passes to in a 42-7 rout of Western Illinois.

—Logan Bonner, Utah State, passed for a career-best 390 yards with four TDs in a 41-24 win over North Dakota.

—Jarquez Hunter, Auburn, rushed for 147 yards as the No. 25 Tigers raced past FCS program Alabama State 62-0.

Verdell, who has struggled with injuries the past two seasons, made it happen. He ran for 161 yards and scored three touchdowns as short-handed No. 12 Oregon stunned No. 3 Ohio State 35-28.

The Buckeyes’ last loss in the regular season came at Purdue in October 2018 under Urban Meyer.

The most anticipated game in Iowa history ended with a loss to rival Iowa State.

Jack Campbell returned a fumble 6 yards for a touchdown and No. 10 Iowa ran its winning streak against No. 9 Iowa State to six games with a 27-17 victory.

In the first Cy-Hawk Trophy game matching ranked teams in 65 total meetings, the Hawkeyes were not about to play the foil for Iowa State’s feel-good story.

The Hawkeyes used a familiar formula as last week when they had two defensive touchdowns in a rout of Indiana, another upstart program looking to build off 2020′s success.

Maybe the Cyclones will have better luck in the Big 12 because the Hawkeyes from the Big Ten are heartbreakers.

The Seminoles (0-2) couldn’t make a 10-point lead in the fourth quarter hold up. Florida State lost for the first time in 27 games against FCS teams.

McKenzie Milton made his first start at Florida State, completing 18 of 31 passes for 133 yards, a touchdown and an interception.

JSU beat a FBS team for the second straight year.

10_Years of football at UTSA before the school's first shutout, a 54-0 win over Lamar.

52_Years since the last time Indiana scored two TDs on special teams before accomplishing the feat in a 56-14 rout over Idaho.

358_Rushing yards by Old Dominion to set a school record in a 47-7 win against Hampton.

Texas hasn’t considered Arkansas to be a rival for a long time. Judging by the goal posts coming down and with the Longhorns set to join the Southeastern Conference soon, that won’t last.

Arkansas ran for 333 yards, held Texas to 256 yards of total offense and the Razorbacks beat their former Southwest Conference nemesis 40-21 on Saturday night. The ninth-largest crowd in Arkansas history, 74,531 strong, was jubiliant all night and many of them stormed the field afterward, celebrating their team’s first win over Texas in Fayetteville since 2003.

Arkansas coach Sam Pittman was the Razorbacks’ offensive line coach the last time they played Texas in the 2014 Texas Bowl. He credited his former unit for the big night. Arkansas was 120th in FBS last year in sacks allowed.