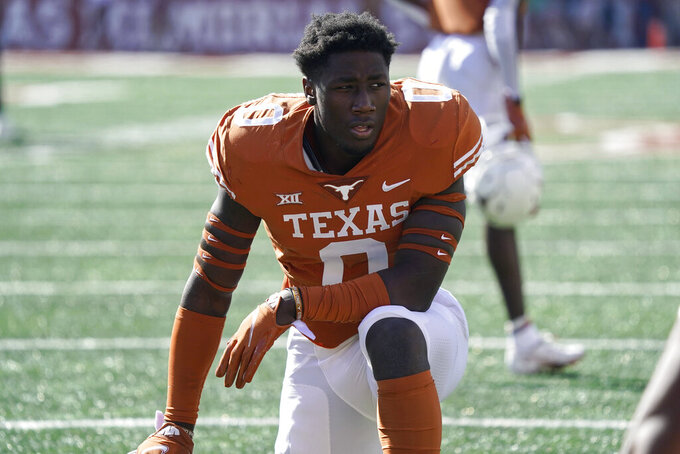 FILE - Texas linebacker DeMarvion Overshown pauses after taking the field before an NCAA college football game against Oklahoma State in Austin, Texas, Oct. 16, 2021. A year after the NCAA gave athletes Election Day off, football teams all over the country were practicing on the first Tuesday in November. Although the NCAA's Election Day rule remains in place, teams could pursue waivers if they wanted to practice. Texas practiced in the morning, which was fine with Overshown. “We still have all afternoon to go and vote and stuff,” he said. "It works better for us anyways, keep the normal schedule, not try to mix things up right in the middle of the season.” (AP Photo/Chuck Burton, File)

A year after the NCAA gave athletes Election Day off, football teams all over the country were practicing on the first Tuesday in November.

Although the NCAA's Election Day rule remains in place, teams could pursue waivers if they wanted to practice — and many did, including some in places with significant decisions on the ballot.

A ballot question that could reshape policing in Minneapolis drew national attention in the aftermath of the killing of George Floyd last year. Minnesota was one of the programs that requested a waiver so its football team, 6-2 this season and in the mix for a division title, could practice.

“Like numerous institutions, we worked with the NCAA and received a waiver to practice today," the school said in a statement. "We continue to provide civic engagement opportunities for our student-athletes and will dedicate a day during this academic year for additional civic engagement programming.”

In September 2020, the NCAA approved a mandate that Division I athletes would not practice or compete on the first Tuesday after Nov. 1. It was a way to encourage athletes to vote and become more engaged politically, although there was some question about whether the value was more symbolic than logistical. Many athletes — and many citizens in general — vote before Election Day, but having the day off opened the door for players to participate in other election-related activities.

With no presidential election this year, and with control of Congress not at stake until the 2022 midterms, there's some question as to whether Election Day remains on the radar for college athletes. This is still an opportunity for coaches to stress the importance of voting even when the presidency isn't on the ballot.

“It's still front and center with our program," Maryland coach Michael Locksley said. "We continue to do things within our program and within the athletic department, to not let kind of the movement of last year kind of die down."

Maryland did not have a major statewide election Tuesday, but the battle for governor in neighboring Virginia was among the most scrutinized races in the country. Locksley submitted a waiver to practice. He said he probably wouldn't have done it if his players weren't on board.

“We prepared to practice Sunday and use today as an off day, but once we met with them and I saw that different teams throughout the country had submitted these waivers, I asked them, would they be interested in practicing on Sunday or Tuesday?" Locksley said. "The day off after a game is really, really important.”

Texas practiced in the morning, which was fine with linebacker DeMarvion Overshown.

“We still have all afternoon to go and vote and stuff,” he said. "It works better for us anyways, keep the normal schedule, not try to mix things up right in the middle of the season.”

Buffalo, which doesn't have another game until next week, gave players Election Day off though other Mid-American Conference teams were playing in three games Tuesday night. Virginia's men's basketball team had the day off. Virginia Tech practiced but had a civic engagement presentation set for afterward.

Georgia Tech said its football, volleyball and cross country teams elected to practice, and athletes were told they could be excused to participate in any civic engagement activity. The teams selected Martin Luther King Jr. Day in January as the day they will prohibit athletic-related activities to promote civic engagement.

A “Coffee With a Cop” event Tuesday morning gave Georgia Tech athletes and athletic staff a chance to engage with campus police and personnel.

Eric Reveno, an assistant basketball coach at Georgia Tech, was credited with promoting the idea of making Election Day an off day for college athletes last year. The men's basketball team's Twitter account said it would be visiting the National Center for Civil and Human Rights in Atlanta.

Stanford coach David Shaw said the Cardinal got a waiver to have football activities, but players also went to local classrooms to talk about the importance of voting and civic engagement.

“Over 50 guys, more than half of our roster, are out in schools today, reading and doing other activities,” Shaw said. “Leadership, training, all kinds of things our guys are doing, which is awesome.”

South Carolina received a waiver and practiced Tuesday morning, but like many other coaches, Shane Beamer wanted to be clear that he understood the importance of voting. There was a team session Sunday that included details of how and where to vote, and players had a chance to do so Tuesday.

“We made it very clear to our guys we wanted to help that process (to vote) in any way,” Beamer said. “Like I told our players, ’Go vote. We want you to vote. That is your right. Take advantage of that and by no means are we keeping you from voting even though we practice.'"